A new small-batch vodka has been released in Canada, in a bottle which acts as a Ouija board. It's been hallowed by stones from Vlad the Impaler's castle and is some seriously freaky stuff. 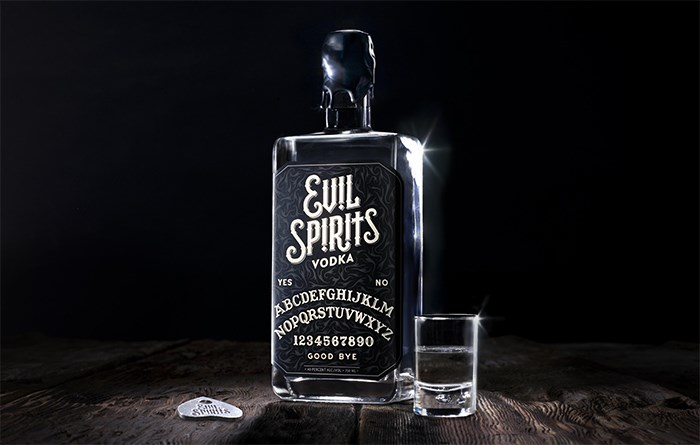 Evil Spirits Distillery has officially launched in Vancouver, haunting the shelves of your local liquor store.

It's been exclusively available for a few years to the founders' "close knit group of our clients and aficionados" (full disclosure: I am one of them), and they recently partnered with The Woods Spirit Co in North Vancouver to produce it on a larger scale.

While they're now making enough to actually sell it, it's still a small-batch vodka. Triple distilled, it's as smooth as any out there.

One of their tag lines is "You'll never drink alone again", playing on the fact that the bottle is a functioning Ouija board that might serve as a portal to the underworld. Each one comes with a planchette; that thing that moves around a Ouija board with help from you and, some believe, people who have passed on and are trying to communicate with you.

If the bottle being an open channel to the dead wasn't creepy enough for you, you'll be happy to know that the beverage is hallowed by actual stones from Poenari Castle. Never heard of it? It's Dracula's castle, once inhabited by Vlad the Impaler, and it's known as one of the most haunted places in the world.

Evil Spirits co-founder David Walker tells us that they wanted to "infuse some evil into our bottles" and that "having a little piece of Dracula seemed like a great way to do it."

The idea actually started as a promotional concept to support the Packaging Design and Brand Development services of the Chinatown-based agency, Saint Bernadine Mission Communications, of which Walker is a partner in. The concept went viral and they received massive interest and sales requests from around the world. At that point they knew they had to distribute the brand much more widely.

Make no mistake: this is some freaky shit, and it's not for everyone.

If you want some and don't see it in your local liquor store get them to contact the brand reps, Noble Traders HERE. OR you can order a bottle directly online for $51.75 HERE.