Drinking this Vancouver craft beer will now raise funds for a famous pig, thanks to Ricky Gervais

Like you needed an excuse to go drink some beer anyhow

When comedian Ricky Gervais professed his love for a certain craft beer made in East Vancouver, the ideas came pouring in for how the brewery could make the most of the moment: Rename the beer in his honour! Let him drink there for free!

But of course, this ale's tale that began on social media was destined to brew up something special in exactly the same place: Twitter.

To rewind a bit: in response to a fan's tweeted query of what his favourite beer was, Gervais singled out Parallel 49's Ruby Tears as "the best I'd ever tasted," (though he did remember the Northwest Red Ale on the brewery's year-round list by its former name, Gypsy's Tears).

Of course, knowing that Gervais is headed to Vancouver - a city he famously "f-ing" loves - in late summer on his "SuperNature" tour, invites for the comedian to stop in to the "Yeast" Van brewery taproom poured forth immediately. And, for a bit of a lark, the brewery temporarily did rename (re- rename?) Ruby Tears "Ricky's Tears" on their taproom menuboard.

But then came an offer Gervais couldn't refuse.

"We would like to donate 25 cents per pint of Ruby Tears and $1 from the sale of each six-pack province-wide to an animal charity of his choosing," shared Parallel 49 on Instagram and Twitter, tagging Gervais.

That's when we reached out to Parallel 49 via their PR agency, hoping to find out a little more about the promo. Had they heard from Gervais? How long would the promo run for? We got put into a bit of a holding pattern to hear from the brewery, but in the meantime, Gervais did, indeed tweet his reply:

Gervais chose Esther the Wonder Pig, a social media darling with over half a million Instagram followers and a Hollywood movie deal, who hails from across the country. Esther has two human 'dads' - Steve Jenkins and Derek Walter - who thought they'd adopted something called a 'teacup' pig - which didn't actually exist. Their new little Esther was going to grow up to be a big, commercial-sized pig. 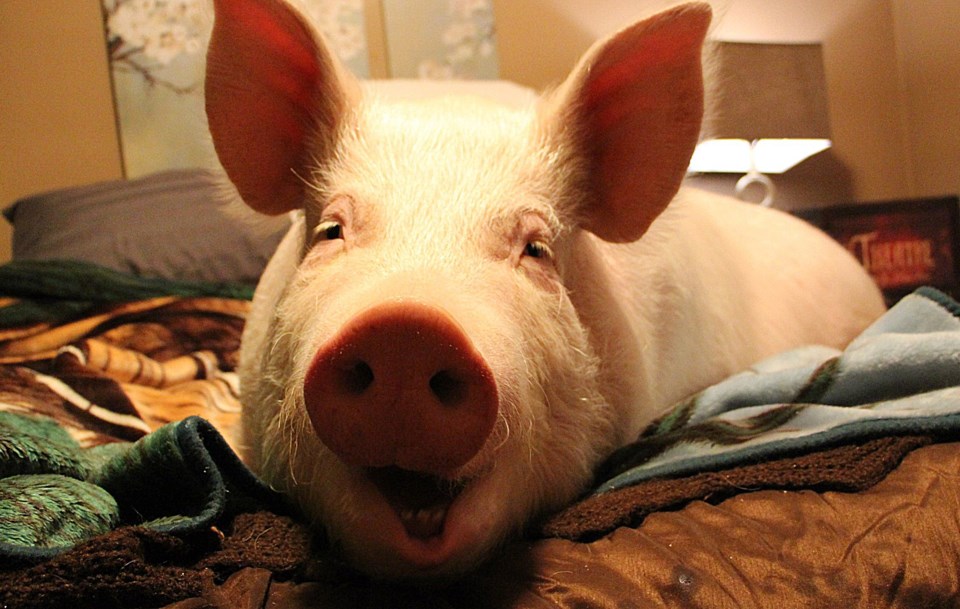 "We called her Esther the 'Wonder' Pig, because we wondered what we were going to do, how big she was going to get, and where we were going to go!" said Walter at a May 2019 event. When it became obvious there was no longer room in their small Georgetown, ON home for their two dogs, two cats and the growing Esther, the couple took the plunge and crowd-funded to buy a 50-acre farm sanctuary just outside of Campbellville, ON. The Happily Ever Esther Farm Sanctuary is now home to 65 animal residents, all of whom were abused, neglected, or abandoned farmed animals.

Parallel 49 hasn't appeared to have revealed the duration of the donation promo, but it's not like you needed any excuse to hit up their taproom for a pour or to grab a six-pack from your local seller.