At this B.C. winery, your taste of terroir goes well beyond the glass

West Kelowna's stunning Mission Hill Winery is a beacon in the Okanagan for locals and visitors alike, and they've upped the game when it comes to getting the land to your table in more ways than one.
Jul 22, 2019 2:10 PM By: Lindsay William-Ross 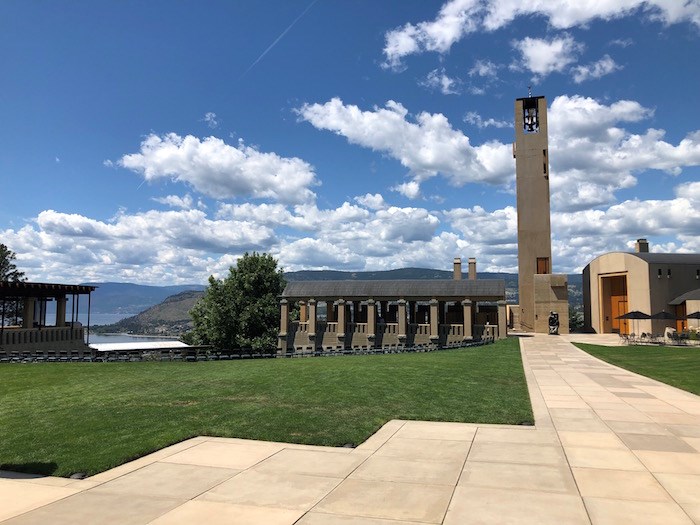 West Kelowna's stunning Mission Hill Winery is a beacon in the Okanagan for locals and visitors alike, and they've upped the game when it comes to getting the land to your table in more ways than one.

Obviously, you're there at their impeccable winery for the views, the wines, and maybe even their incredible art. But you'll want to make sure your visit includes a sit-down at their Terrace Restaurant, in order to fully appreciate how important terroir is to them here. 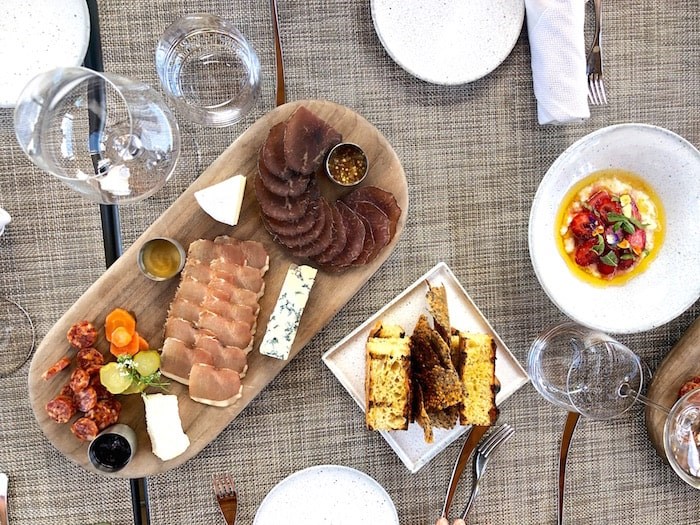 Among the offerings at the Terrace Restaurant at Mission Hill is a charcuterie platter featuring house-cured B.C. meats, and locally-sourced fresh cheese. Photo by Lindsay William-Ross/Vancouver Is Awesome

Everything on the menu at the Terrace Restaurant is Canadian - except their imported olive oil, mind you - and a great deal it of it comes from Western Canada, within B.C., within the Okanagan, and even from their very own grounds.

Most of the meat and dairy are sourced from a 300-kilometre radius, including beef from the renown Cache Creek, fish and seafood from the west coast, and most of the cheese from the Okanagan. 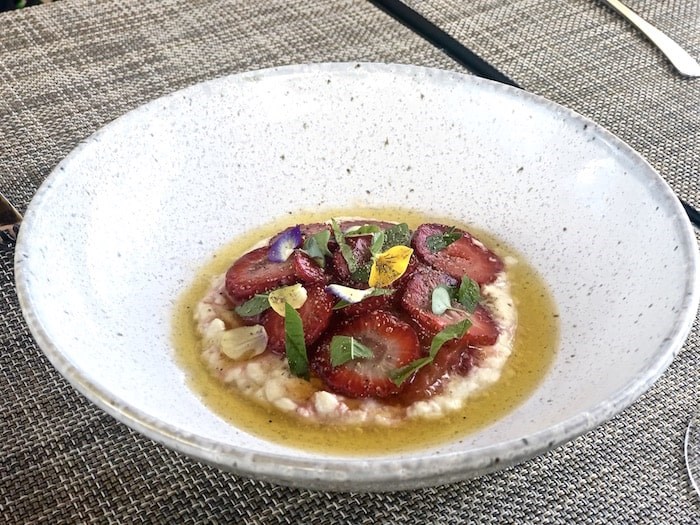 Mission Hill's culinary team, headed by Chef Patrick Gayler, takes things a step further when it comes to proteins, by butchering and curing their own meats in-house for their charcuterie boards. For example, you can nibble on bresaola made from Cache Creek eye of round, cured in Mission Hill Family Estate Shiraz, and Estate herbs for eight weeks before it's air-dried, or their house-made fennel pollen salami made with Cheam View Ranch pork that's been marinated in local fennel pollen and espelette pepper then air-dried for three weeks.

While most of the cheese comes from nearby producers, such as the King Cole Blue from Upper Bench Creamery in Naramata, as well as producers out of the Shuswap and Agassiz, they're also making cheese in the Mission Hill restaurant kitchen. 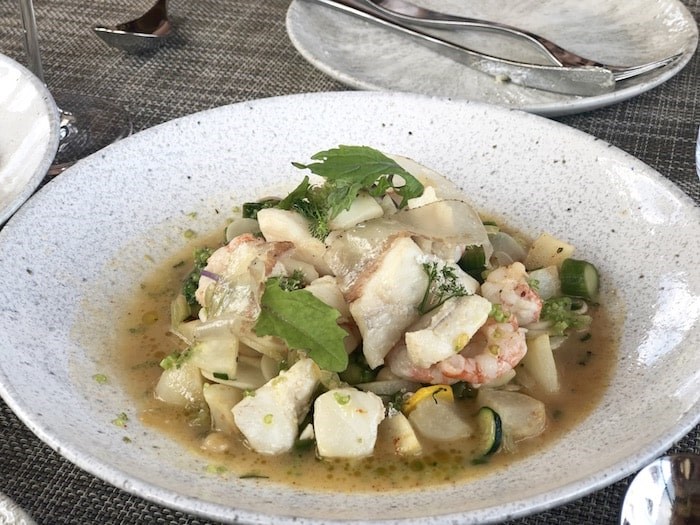 Un-homogenized grass-fed milk is sourced from Grass Roots Dairies in Salmon Arm. "Every day, we set the curd using rennet and then hang it in cheese cloth overnight, before serving with seasonal garnishes," explains a rep for Mission Hill.

Gayler has also brought some of his own personal heritage to the table; you'll find little extras like his Great Grandmother’s Imperial Relish on offer. The condiment is similar to a piccalilli, and is made in late summer each year using peppers, onion, cucumber, and cauliflower.

If we're talking veg, it's hard to beat having it grown right on the grounds, and that's just what Mission Hill is doing. Their Estate culinary and herb gardens are a bountiful source for the winery, with additional support from Kelowna's Unearthed Farms. That puts the best of the season within arm's reach for Gayler and his team, who are constantly rotating dishes to showcase what's in the current harvest. The last of the late-spring asparagus made its way to the table at the Terrace Restaurant at Mission Hill Winery. Photo by Lindsay William-Ross/Vancouver Is Awesome

It's not just the staff at work in the gardens, either, at Mission Hill. Their Mission Hill Family Estate Beehive program is currently in its fourth season. There are close to a dozen hives on site, and they produce enough honey for the winery to be able to jar the liquid gold and sell it in the winery boutique. How's that for a sweet winery souvenir that lets you savour your visit for days to follow?

I made my first visit to Mission Hill just this late spring, courtesy the winery, and was struck by their commitment to that beautiful partnership of storytelling and location.

Expressions of the winery's desire to articulate the histories of wine, the region, the Okanagan Valley overall, and themselves are evident in overt and subtle ways throughout the venue. If you're wise to book a tour that includes a peek in the cellar, you'll experience everything from the cooling chill of water seeping down through the volcanic rock walls to the glimpse of the gated portfolio library that is itself dedicated to capturing time in several bottles. 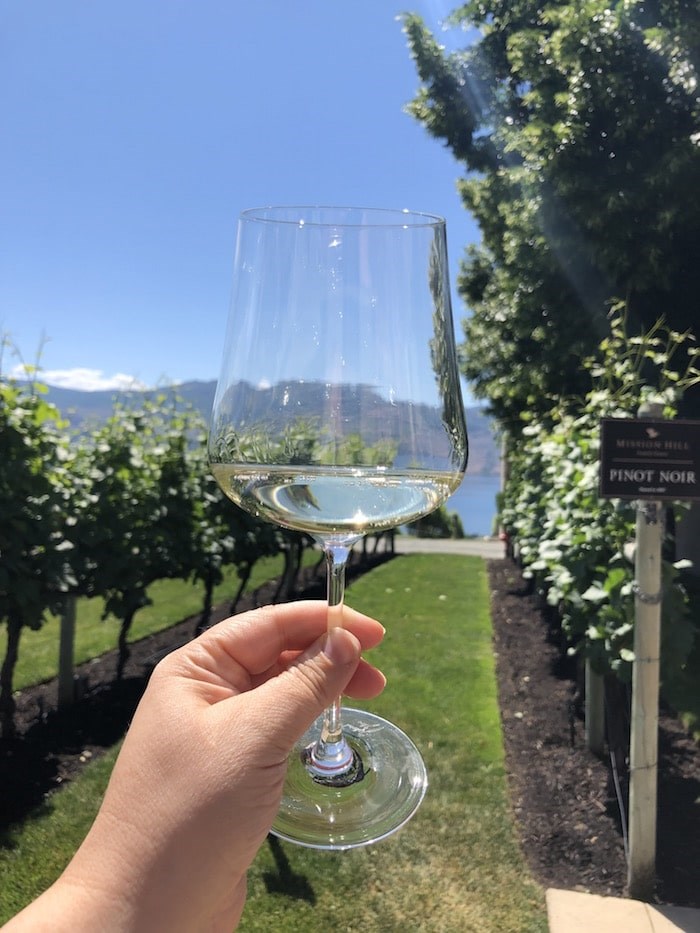 Sampling an Estate wine at Mission Hill. Photo by Lindsay William-Ross/Vancouver Is Awesome

Visits to Mission Hill can be as easygoing as a casual pop-by for a meal and a tasting, or a more immersive and focused planned-out venture to one of their tours or events. While their popular summertime Longtable Dinners are already at capacity, upcoming gatherings include a Fall Winemakers' Dinner in early October, the Oculus Dinner in mid-October, and their ongoing slate of tours with a culinary focus. Those sommelier-guided tours include a 60-minute wine and cheese tour; a 90-minute Garden Lunch tour; or a 90-minute "Taste of the Estate" tour. You'll find information about all their tours online here. The views at Mission Hill are unbeatable. Photo by Lindsay William-Ross/Vancouver Is Awesome