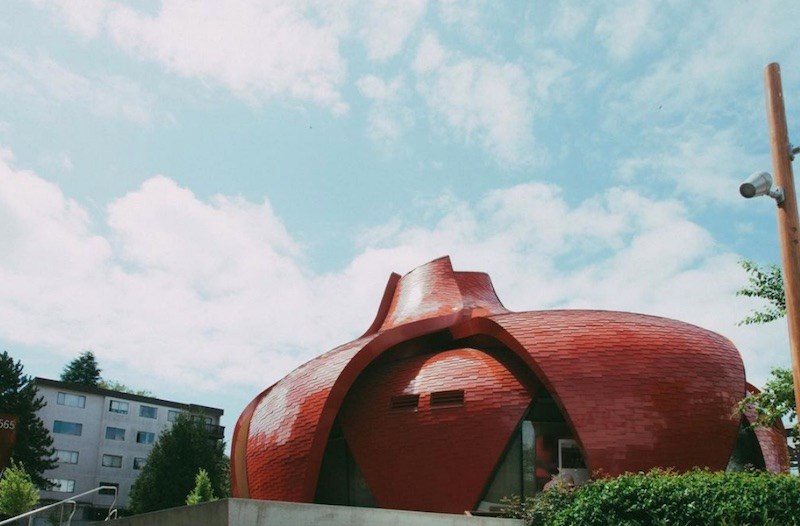 That eye-catching red flower-shaped building on Great Northern Way in Vancouver is the home of Nemesis Coffee's flagship location. @nemesis.coffee/Instagram

Coffee lovers in Vancouver have had their eye on this one for just about a year now: Nemesis Coffee is opening a stunner of a location inside an eye-catching red flower-shaped building in a growing east-side area.

Announced back in March 2020, Nemesis has been working toward what they're calling its "next-level" build-out of the location that's part of the "South Flatz" development adjacent to Emily Carr University. Nemesis' new home is inside that red 'petal' pavilion, a 2,000-square foot space contained beneath an exterior of overlapping, cascading deep red panels.

The building was designed by Vancouver's Perkins+Will for PCI Group. Aptly, among the many local and international projects with the Will+Perkins touch include the visitor centre at VanDusen Botanical Garden, which also has a flower-like exterior shell.

In recent weeks, Nemesis has been sharing glimpses into the building's interior as they make marked progress on creating their roastery and cafe space.

Building a 'next-level' space for coffee and food

Great Northern Way will be the new flagship location for the Vancouver-based coffee shop.

Nemesis says the location is "shaping up to be a next-level build-out," adding that "the equipment [they] have sourced will blow your mind."

To that end, Nemesis is using a Loring roaster; the company is known for its "smart roast" equipment that minimizes emissions.

Additionally, this location of Nemesis will have a full kitchen in addition to coffee and pastries.

"Serving as our flagship store, we had to find a way to include all the elements that make Nemesis special, from the standard and integrity of the food we serve, to the service you are accustomed to. Along with our new direction of coffee roasting, it has been a huge challenge to unify all our different programs in a functional yet visually stunning way," said Nemesis in late January.

Nemesis Coffee began a few years ago with their more modest Gastown digs. The coffee shop drew acclaim for its brunch-centric eats and baked goods.

At the end of 2019, Nemesis opened up on the North Shore as part of The Polygon Gallery near the Lonsdale Quay; there they have their "Dope Bakehouse" production facility.

In addition to their food and pastries, the cafe is known for its single-origin coffee program, as well as its music and arts-fuelled vibes. The brand's connection to facilities so rooted in arts and culture, like Polygon and Emily Carr University, suit the cafe-restaurant - with their "Coffee Creating Culture" motto - quite well.

No opening date has been set just yet, but Nemesis says launch time is soon.

In the meantime, check out some more images the coffee business has shared from its Great Northern Way flagship build-out: