'We haven't even stopped adapting': The pandemic year in the life of a Vancouver restaurant

One night a year ago, the owner of a couple of popular Vancouver restaurants was up in the wee hours writing eulogies for his businesses. Today he's looking squarely into the future.
Mar 24, 2021 12:42 PM By: Lindsay William-Ross 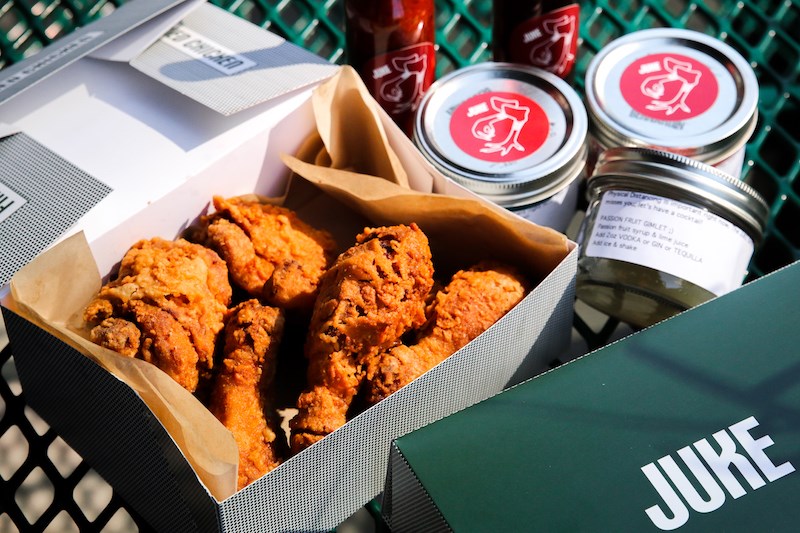 Take-out was already a pillar of the business for Juke when the pandemic hit, but that doesn't mean the first year of the COVID-19 pandemic in Vancouver was a breeze for the popular fried chicken spot.Photo courtesy Juke

Justin Tisdall remembers being up at 2 a.m. the night of March 17, 2020, writing what he calls "goodbye letters" on behalf of the two restaurants he operates with business partner Bryan Satterford. Restaurants across British Columbia had been ordered to close in response to the threat of the coronavirus (COVID-19) pandemic, and the future was draped in uncertainty.

"I was writing the eulogy for the restaurants," Tisdall tells Vancouver Is Awesome in a phone interview, describing that dark point of panic. "Everything we own was on the line."

Tisdall and Satterford own and operate Juke and Beetbox, two well-liked casual hotspots in Vancouver known for comfort fare. Juke, in Chinatown, specializes in fried chicken, while Beetbox, its West End kid sibling, is a wholly plant-based spot focused on comfort eats. A third concept, Chickadee, is a cocktail and snack bar tucked inside Juke. But before Chickadee could begin to roost in earnest, Tisdall, Satterford, and their team had to get through the initial shock of what running restaurants during a global pandemic meant.

But first: Tisdall pushed up his sleeves and got to work.

Fuelled by the notion of how they could turn a bad situation into a potentially long-term positive for the business, Tisdall says they acted swiftly and boldly. Given the option to "end this or fight this," he says of running the businesses, Juke and Beetbox were going to "go down fighting," if they were going down at all.

Staff were given an option to stay on or step away if they needed to. The menu was cut in half, and they immediately reached out to suppliers to find ways to keep costs low.

Within 48 hours, attests Tisdall, he had seen two polar opposite sides of the spectrum of having a restaurant business in the face of COVID-19 in Vancouver.

A shift from behind the bar

One of the Juke employees who stayed on was Bar Manager Sabrine Dhaliwal. Well-known on the local drinks scene, Dhaliwal suddenly found herself shifting from pouring craft cocktails to being part of Juke's take-out order team. Stranger still, Dhaliwal says when the shutdown hit B.C. in mid-March, she was fresh off a trip abroad where she had a glimpse of what could potentially come to Vancouver with lockdowns and soaring infection rates.

"I managed to be one of the lucky ones who kept working through all of this," says Dhaliwal, adding that while it was disheartening when dine-in had to close, she was fortunate enough to be employed by a business that was not only taking care of its tight-knit staff but also thinking about sustainability into the future. 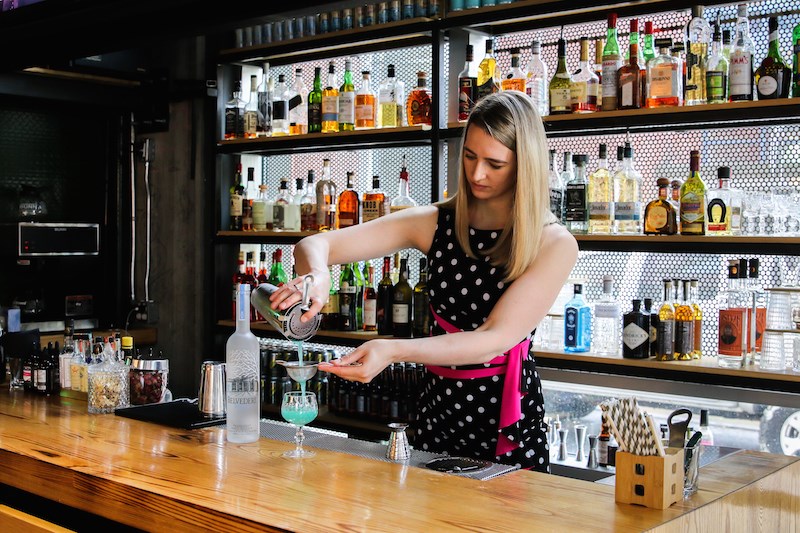 While "pivot" is a word that shot back into our collective vocabularies last year faster than that couch had Friends' Ross, Rachel, and Chandler scrambling in the stairwell, Tisdall isn't too keen on the word. That's because he says, for the most part, the shifts in operation Juke and Beetbox took on in 2020 were directions in which the businesses were already headed.

Echoing Dhaliwal's sentiment of gratitude, Tisdall acknowledges that Juke and Beetbox being take-out friendly established brands before the pandemic made the transition to take-out only a lot more digestible to the public. At Juke, with fried chicken already designed to stay hot, crispy, and juicy in its paper take-out box, customers were already loyal to getting their grub to-go. Established pre-pandemic with third-party delivery apps, Juke did not have to reinvent their products or develop an entirely new branch of the business.

Still, as opportunities arose or were created, Tisdall and the Juke and Beetbox teams did branch out in order to diversify their offerings and open up new revenue streams. A longtime industry pal of the team at Legends Haul, Juke's smoky, spicy BBQ sauce was among the first restaurant items for sale when the food delivery business opened up to orders direct from consumers. Beetbox soon followed suit, developing a line of packaged plant-based sauces and condiments perfect for Vancouverites looking for a little local restaurant-made boost to their home-cooked meals.

Then a new opportunity presented itself: Why not take advantage of being closed for dine-in to re-fit the room and make some longstanding plans come into fruition?

Tisdall says the idea for a dedicated cocktail bar side to Juke had been on their minds before they had a lease on a location for the fried chicken spot, but it wasn't until the pandemic that the concept could be fully-formed. Factoring in that the cost of the renovation was a few weeks of sales, Tisdall and the Juke team opted to use the downtime to their advantage.

For Dhaliwal, this was prime time for her creative mind to get to work, too, on developing plans for the cocktail-forward Chickadee. The award-winning mixologist says the "exciting, rewarding, and challenging" experience was her first time getting a bar concept going from nearly the ground-up, and a good preview of what it might be for her to someday launch her own spot. 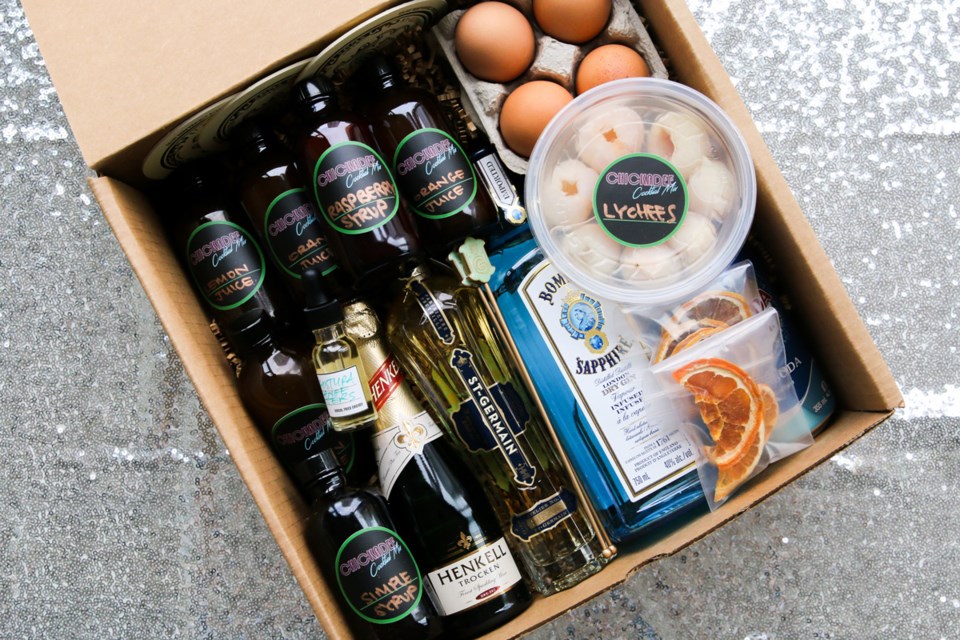 One of the cocktail kits. Photo courtesy of Chickadee

At around the same time, one of her projects was to come up with cocktail kits to sell for take-out, as well as pre-batched mixers the restaurant could offer.

Not having a favourite local bar for hanging out at the onset of the pandemic was "a void that [needed] to be filled," for many Vancouverites, says Dhaliwal. Coming up with kits for customers to recreate the bar experience at home was both a creative outlet for Dhaliwal and another way Juke could diversify its take-out offerings.

One welcome change for Dhaliwal and Tisdall during the course of the last several months was B.C.'s swift decision to permit restaurants to sell liquor with take-out orders; the temporary program was made permanent this winter.

"It's a permanent change that will help the industry in the long run," remarks Dhaliwal.

"I don't know exactly what was holding this up before," says Tisdall of the new liquor laws. "I've been in the industry for 20 years, and we've been talking about it for 20 years. It's a great way for us and other businesses to be able to sell bottles of wine," he adds, pointing also to Chicakdee's cocktail kits as an avenue that allows them to make the most of the new laws.

Chickadee opened officially in mid-June, and dine-in service was available for Juke, though they continued to emphasize their take-out and delivery options for those who weren't yet comfortable going into restaurants. The team had tandem priorities: How can they maximize safety for patrons but also draw take-out revenue with seating capacity halved.

On top of the concerns was keeping the staff safe. Tisdall praises the Juke crew for being "rock stars," through the pandemic, and Dhaliwal explains how management worked diligently to protect the workers by implementing "cohorts" for shifts to minimize contact among staff.

Dhaliwal says the restaurant's staff-centric focus is part of a perspective shift she's noticing across the industry, as there's diminishing importance on the "customer is always right" style of doing business.

"A lot of businesses are re-evaluating the business model, and putting more emphasis on protecting their own staff," she explains. "I absolutely think that needed to happen anyhow, it was getting out of control," she says of the ubiquitous demanding kind of customer restaurant workers across Canada and the U.S. are all too familiar with, what the bar manager calls the "whole 'you owe me something' mentality."

That said, both Dhaliwal and Tisdall are thankful that Juke's customers have proven to be not only loyal but also patient and understanding during the last year.

A COVID case in the house

Fewer instances put staff safety and customer patience to the test than when a restaurant employee becomes infected with COVID-19, which is something Juke faced in late August. Vancouver Coastal Health reached out to the restaurant management, who were already aware an employee had tested positive. With so many safety precautions already in place, VCH deemed the restaurant safe to continue to operate, but Juke made the decision to voluntarily close in order to further protect themselves and regroup before re-opening, risking the stigma that comes with having a virus case among its ranks.

Considering that restaurant staff interact with each other and patrons closely on a daily basis, having a vaccine program that prioritizes hospitality workers would be an asset, says Dhaliwal.

Is she eager to get her jab? "Selfishly I say yes," says Dhaliwal. "I would love for hospitality workers to get vaccinated sooner, but I also understand that I'm young and healthy," she adds, acknowledging that others in the province may be the priority for vaccination.

Of course, the more people that are vaccinated, the more likely the dining out scene is likely to pick up. What that looks like in the long run might remain to be seen, but for Dhaliwal, the immediate focus is clear: "It's slowly rebuilding consumer confidence and as vaccinations increase it will only go up from there."

To that end, she is eager to be pouring her drinks behind the bar at Chickadee, even with safety precautions in place. "Social interaction is part of who we are. When going out for a drink gives people a sense of connection and community, then we've done our job." 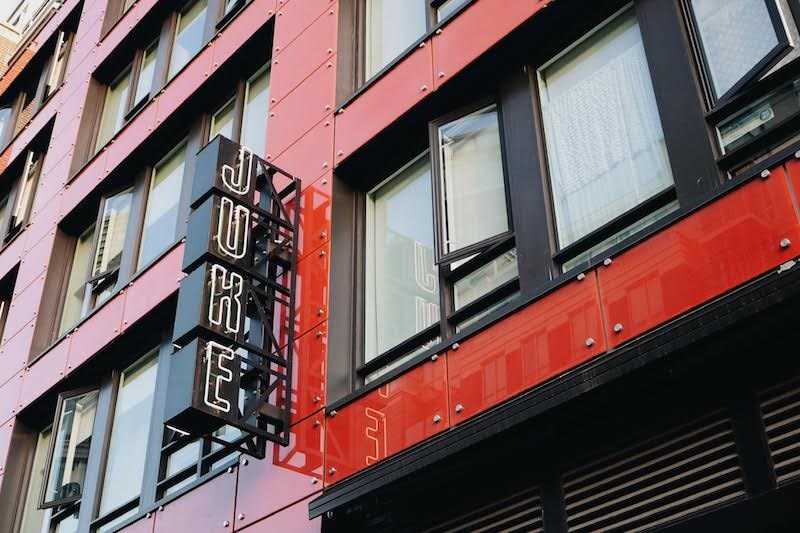 Juke co-owner Justin Tisdall is looking ahead a year from now in the life of the restaurant. By Photo courtesy Juke

Dhaliwal adds that she welcomes the opportunity to talk through the safety precautions in place at Juke and Chickadee for any customer who might have concerns. She says they can contact the restaurant ahead of their planned visit, and she's happy to chat with them for a few minutes.

"I take great pride and joy when people come in who maybe haven't been out for drinks in a while. We can be that positive experience."

Tisdall says he's long been thinking about further ways to branch out the business and get ideas off the ground. Having a roster of packaged products is part of a "huge wave" of consumer change, for example. Those customers are "really supporting independent businesses now." The dining industry is "moving in this direction," he adds, with "more delivery, home kitchens getting smaller and food becoming more expensive."

The future, frankly, is where Tisdall's mindset is.

"We're really looking at things a year ahead of now," says the restaurateur, hinting at some fun projects in the works.

"We haven't even stopped adapting," says Tisdall. "Every couple of weeks we are changing things, and making sure we are a fun and safe place to go."

After 41 years, an iconic Vancouver restaurant will close to undergo a total transformation and rebrand
Jul 29, 2021 9:32 AM