Here's what to eat right now in Metro Vancouver

Including breakfast dishes to get out of bed for, Roman-style pizza and pasta for lunch, and all the seasonal eats at Vancouver's festive Christmas market.

Decisions, decisions: What are you going to eat right now, and where are you getting it?

If you need some help with your next meal, snack, treat, or drink, consider this your guide. Here’s what to eat right now in Metro Vancouver.

The Breakfast Sammy at Livia. Photo by Lindsay William-Ross/Vancouver Is Awesome

Opened earlier this year, Livia is a lovely bakery and cafe on Commercial Drive that offers bountiful breads and pastries, a daytime menu of breakfast and brunch eats, as well as pasta-focused dinner service. For the morning meal, look for their scrambled egg breakfast sandwich with mortadella, greens, and pickled onions on one of their pillowy buns, or the hearty stofato - stew - made with tomatoes and anchovies, topped with poached eggs and served with thick slices of sourdough toast for all the scooping and dipping and draping you'll want to do.

While Gastown’s Di Beppe has always operated a daytime cafe, with their sit-down restaurant opening up in the evenings, the Italian eatery has just launched lunch service. Pizzas, like the funky anchovy and onion or the classic Margherita, can be ordered in a smaller size, or the more impressive al metro, which comes on a long wooden board, with a bubbly, chewy, rectangular crust. Pastas include options like a Cacio e Pepe or a hearty carbonara with generous chunks of crispy guanciale.

Everything at the Vancouver Christmas Market

A pierogy platter at the Vancouver Christmas Market. Photo by Lindsay William-Ross/Vancouver Is Awesome

'Tis the season to be jolly and to eat all the things. If you find yourself at the Vancouver Christmas Market down on Jack Poole Plaza, bring some bucks and wear your stretchy pants so you can feast until you're full on these eats: hand-rolled buttery soft pretzels, cinnamon sugar churros, mulled wine, pierogies, schnitzel, spaetzle, turkey legs, brats, poffertjes, aebleskivers, stew in bread bowls, and gooey Raclette cheese.

All the meats at Chinatown BBQ

At this unassuming spot on Pender Street you'll find authentic Chinese BBQ dishes to enjoy in the restaurant or to go. They cover all the classic bases here, and beautifully, to boot, slicing up orders of BBQ or roasted pork, BBQ duck, and soy sauce chicken, as well as curry brisket and poached ginger chicken. Figure out how much you can tackle and go for a combo plate with rice so you can try as much as possible - the BBQ pork is perfectly juicy and lacquered, and the soy sauce chicken fragrant and tender.

Gelato and sorbetto at Uno Gelato 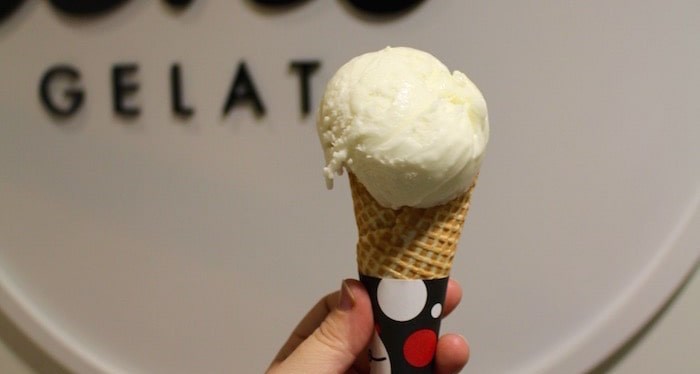 Vancouver's Uno Gelato makes small batch gelato and sorbetto using fresh, natural ingredients, including many sourced from the region. Just because it's winter doesn't mean you can't tuck into a cold treat...especially when they are scooping delicious flavours like Bailey's Irish Coffee, Chocolate Nutella, Salted Caramel, Dreamsicle, and a beautiful fresh Mint Chocolate Chip - made with real mint leaves. You can also learn how they make gelato and make a batch with them during their new Gelato 101 classes.

Vegetarian and vegan Vietnamese dishes at Do Chay Everything on the menu at Do Chay is either vegetarian or vegan. Photo by Lindsay William-Ross/Vancouver Is Awesome

Opened this spring, Do Chay on Kingsway offers Vietnamese fare that is primarily plant-based and completely vegetarian. A sibling to Yaletown's House Special, Do Chay is taking modern Vietnamese fare to the next level with their creative meatless takes on classic dishes. Crispy vegan spring rolls come with a side of "ish" sauce - nary a fish in sight. Bite into juicy delicate dumplings, or tuck into a rich, steamy bowl of noodle soup, like their Desert Island Noodles made with rice noodles, coconut milk, and a vegan meatball. And of course they've got a vegan pho, too. It's an extensive menu, so bring friends or plan to hit them up a couple of times to try it all. Open the nondescript door and climb the stairs to Campagnolo Upstairs on Main Street to enjoy their menu of elegant but satisfying bar food. They are known for their Dirty Burger - which is great - but they also happen to make a beautiful beef tartare that's perfectly silky and a great foil for a strong drink from the bar. Camp Upstairs is an unpretentious spot perfect for a date, friends' night, or post-work tipple. 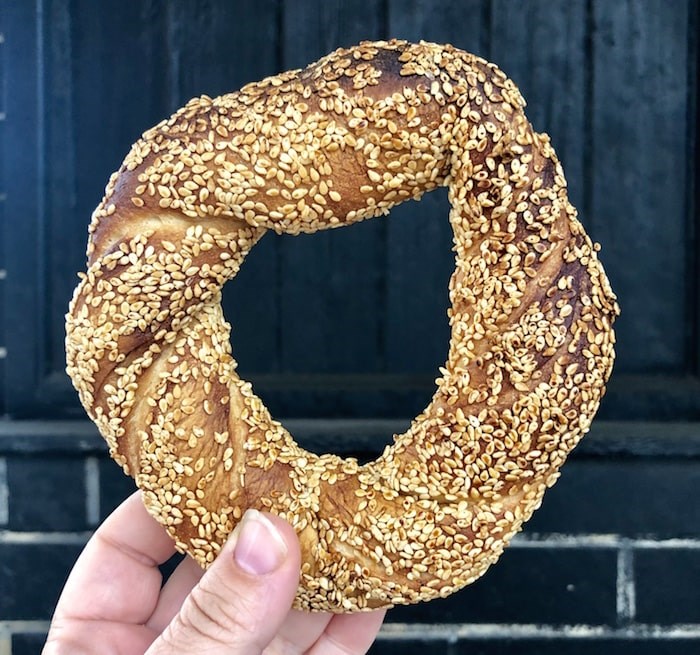 This is a sesame seed Turkish bagel from Smith’s Bagelry. Photo by Lindsay William-Ross/Vancouver Is Awesome

This isn't your typical bagel joint. Smith's Bagelry specializes in Turkish baked goods, and their signature item is the twisted bagel. Using a recipe and method dating back to the 1400s, Smith's artisan twisted bagels are unlike any other you'll get in Vancouver. You'll spy their bagel cart outside their West Broadway storefront, but be sure to pop in to see what's fresh in the case, like their eclairs, buns and breads, and their San Sebastian cheescake. 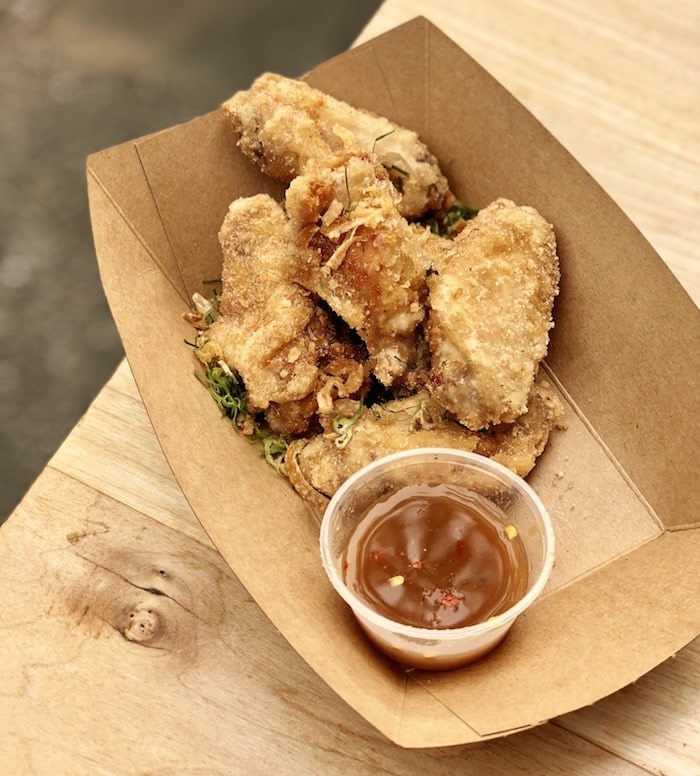 You should never not order these chicken wings at Longtail in New West. Photo by Lindsay William-Ross/Vancouver Is Awesome

If you don't live near the River Market in New West, the salty-sweet fried chicken wings at the award winning Thai restaurant Longtail Kitchen will make you wish you did. The very definition of finger-licking good, Longtail consistently nails these juicy golden-fried gems. Pair them with some fiery noodles, saucy and sticky pork belly with tender kai lan (greens), or just order up a second basket. We won't tell. A Mexican Vanilla donut with pork al pastor at Boca Grande in Ladner. Photo by Lindsay William-Ross/Vancouver Is Awesome

Oh yes, they did. And...it works. Boca Grande, in Delta's charming Ladner Village, draws lines for their over-the-top decadent doughnuts, but if you skew towards team savoury and are feeling brave, check out their "Donut Taco." They slice open and grill their classic Mexican Vanilla Donut, then load it with your choice of their house-made Mexican fillings, like pork or cauliflower al pastor, or chicken mole. Why does a doughnut shop also make Mexican food? Don't worry, it all makes sense.

What a fool I was to think I could cut back on sugar and carbs as we head into the most delicious time of year for over-indulgence. The Bench Bakehouse on Commercial Drive is turning out some gorgeous baked goods, from buttery chocolate dipped shortbread cookies to Christmas cakes and more. But they also sell bags of Kouign Amann Crunch that are beyond addictive; it's crispy bits of Kouign Amann, a pastry made of layered dough packed with butter and sugar. I'm loving it with some coffee at my desk, but you'd do well putting together a hostess gift or gift basket with a bag of this stuff (along with more of their goodies). Find them at Il Mercato on the Drive. 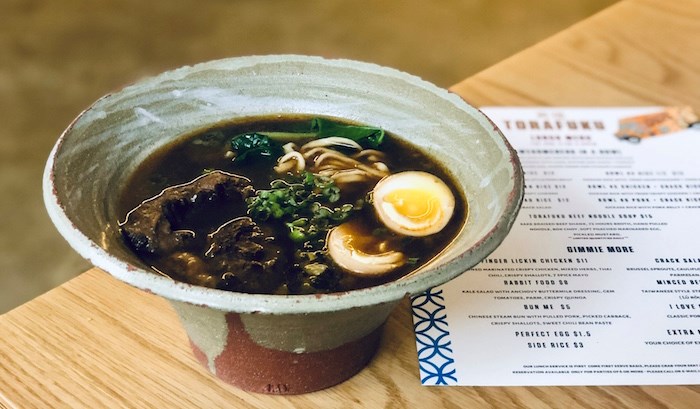 Torafuku just launched an expanded lunch schedule and menu, including Chef Steve Kuan's Taiwanese Beef Noodle Soup. This is a rich, satisfying, fragrant both of broth filled with perfectly slurpy and chewy noodles, a tender lob of beef, a jammy boiled egg, and fresh greens. A soulful, warming bowl, punctuated with clear notes of pungent star anise, this is one bowl you should make plans to seek out - it will help take the edge off our chilly fall weather, for sure. What did I say about cutting back on sugar and carbs? Now I really mean scratch that. November is Hawaiian month at Lucky's, and they have a limited edition line-up of doughnuts that can add some sunshine to your day. Coconut Lime Old Fashioned, Guava Cheesecake, and more, including the return of their Pineapple Upside Down Cake (which, if you do a deep, deep scroll on my Insta feed to a couple of years back I said I was going to marry). Just remember, aloha means hello and goodbye, and November wraps up soon. This halibut dish was on the summer lunch menu. Farmer’s Apprentice/Facebook

The Farmer's Apprentice in South Granville has been a reliable spot for contemporary locally-sourced dishes that show a lovely reverence for B.C.'s incredible bounty. While you'll get the ultimate taste of what they're up to here doing a dinner tasting menu, they also offer a three-course lunch for $37 a person that includes a starter, main, and dessert. Recently I enjoyed a refreshing Chicory salad with walnuts and pear, and a filling rice bowl with spicy Filipino garlic sausage and a perfect sunny egg. Make sure to ask what the sorbet of the day is. New West's Kozak has finally opened their Vancouver bakery and cafe on Victoria Drive. Head there for their beautiful breads and baked goods, and everything from varenyky (pierogies) to borsch (beet soup, in vegan and non-vegan versions), along with holubtsi (cabbage rolls), nalysnyky (a stuffed and rolled crepe), as well as savoury piroski (stuffed breads). Their lunch combo includes a small bowl of borsch, two pieces of varenyky, two cabbage rolls, and one nalysnyky, along with a generous slab of the bread of your choice – perfect for soaking up the tomato sauce of the holubtsi and dipping into the shimmery maroon goodness of their delicious borsch. Oyster Express says it all in their name: OYSTERS. This modest Chinatown evenings-only spot has an impressive array of B.C. oysters, as well as those culled from other locales. They put one B.C. oyster on special daily for $1.95 a shuck, which drops to $1.50 at Happy Hour (5-7 p.m.) They also drop the price similarly on a "premium" non-B.C. selection. Pair it with a pint of specially-priced beer, add in some eats like fried oysters or their grilled cheese sandwich, and you have quite the stellar Happy Hour option for bivalve lovers. When the weather turns chilly, there's nothing like a big steamy bowl of spicy noodles to warm you up from the inside out. Shiok aims to bring a bit of Singapore to Vancouver. They opened up not too long ago on Kingsway, and they serve up a terrific Laksa, a fiery soup made with curry noodles (your choice of white or yellow). To round out your meal, get some of their prawn-spiced chicken wings or a classic satay with their house-made peanut sauce. 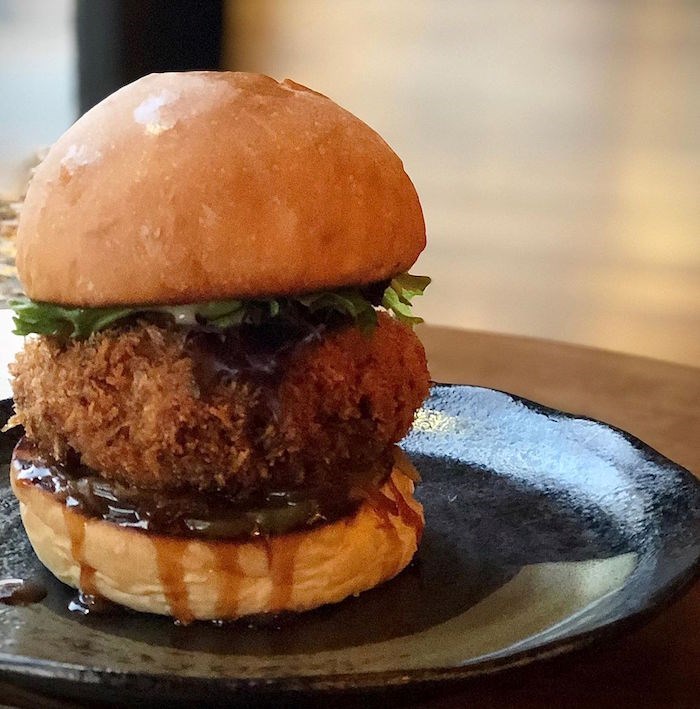 Dosanko is one of Vancouver's hidden gems. The casual Railtown eatery specializes in homestyle Japanese fare, including udon, a perfectly jiggly and IG-worthy Omurice (omelette with rice), and some wicked specials. Right now they're showing off this epic beef burger that's stuffed with American cheese, crusted in panko and fried, then loaded with caramelized onions, Tonkatsu sauce, koji mayo, and iceberg lettuce served on a house-made milk bread bun.

All the bars at Butter Baked Goods 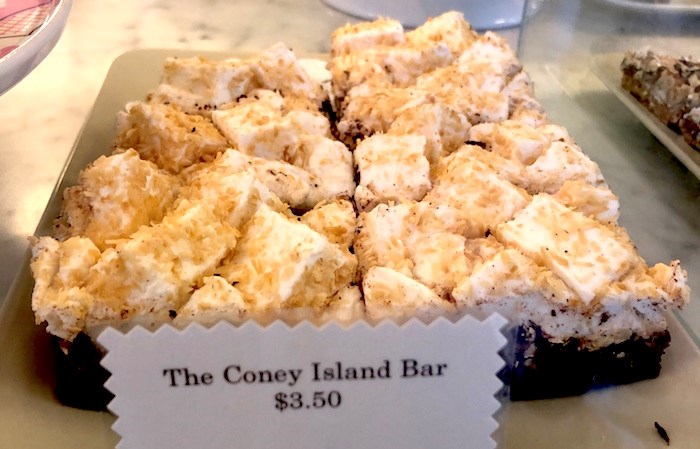 I've loved Butter Baked Goods in Dunbar for a long time, but it was on a recent visit that it struck me that what they do so well that so few other bakeries in the city do are bars. Not just brownies and B.C.'s beloved Nanaimo, but all sorts of gooey, sweet, crave-worthy bars. Their Coney Island Bar has a fudgey base with a toasted coconut marshmallow topping, while their signature Dunbar is made with chocolate, pecans, coconut and dulce du leche. They've got Date Bars, Lemon Bars, Hello Dolly bars, Dream Bars...seriously, the list goes on. Belly up to these bars for a sweet escape. 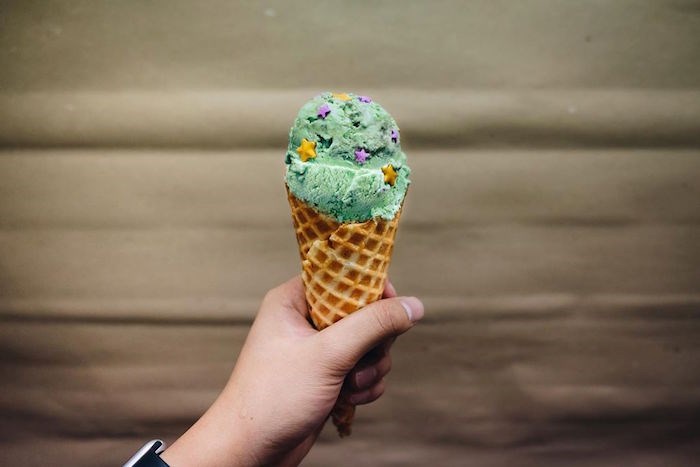 Leave it to the creative minds at Vancouver's Rain or Shine to turn the meme/U.S. military base into an ice cream flavour they're now scooping at all their locations. Their Area 51 is a limited edition ice cream made with a green apple base swirled with charcoal cinnamon caramel and mixed in with purple star sprinkles and gold star candies.