A brief history of Kingsgate Mall

This photo below was shared on the Nostalgic/Sentimental Vancouver Facebook Page that I recommended you follow right now.
0
Jan 18, 2016 10:46 AM By: Bob Kronbauer

This photo below was shared on the Nostalgic/Sentimental Vancouver Facebook Page that I recommended you follow right now. It shows the school that was originally built on the site where Kingsgate Mall sits today, on the corner of Broadway and Kingsway. Constructed in the late 1800's this beautiful building was torn down in 1972. Kingsgate was then built on the site in the 70's and much of the charm of the place is that it seems to have remained in that decade. 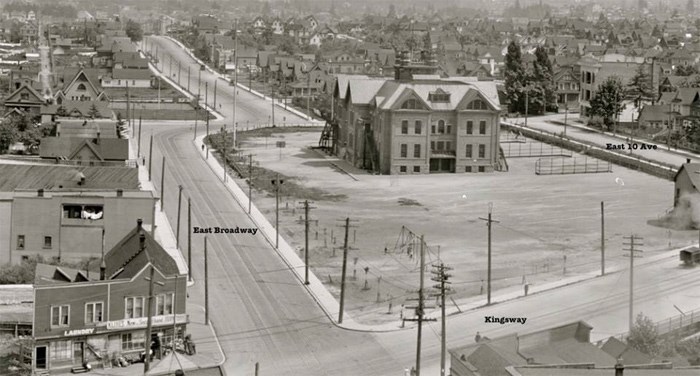 Civic reporter Frances Bula wrote a great post about it on her blog back in 2012 when it was rumoured that a developer was going to be tearing down the beloved mall. She wrote that the land is still owned by the Vancouver School Board and that they rent it out to The Beedie Development Group for a tidy sum of $750,000 per year, and that Beedie holds a 99 year lease on the site and it doesn't expire for another 60 years or so. As reported in The Courier, it's hard for a developer to develop on leased land and a freehold is a much better scenario. Meaning that the School Board could choose to sell the land at some point, and that's when the mall may disappear. The VSB has promised that the public will have a say in it (and they make $750K a year off of it now!), so Kingsgate will likely be there for many years to come.