As a lifelong Vancouverite, one thing that I've noticed has always been a constant is how hard this City likes to party! Give the citizens any opportunity to get hammered and hit the streets and they will do so with reckless abandon...
Kevin Kelly Mar 31, 2009 4:24 PM

As a lifelong Vancouverite, one thing that I've noticed has always been a constant is how hard this City likes to party!  Give the citizens any opportunity to get hammered and hit the streets and they will do so with reckless abandon...

Hi, I'm Kliff Klaven. New to the VIA family and resident history nerd. I've been a fan of VIA for a while, and thought it could be a cool idea to share some of Vancouver's awesome past from time to time on here. Although we are a relatively young city, we've got more than our fair share of cool stories, characters and events. So without further ado, lets start off with a fun story from the day Vancouver burned to the ground :)

Vancouver was first settled in around the 1860's. Back then it was pretty much a sawmill and a passthrough point for miners heading up into the Fraser Canyon. While places along the Fraser River like Yale, Lillooet and Lytton grew rapidly into bustling towns full of hopeful gold rushers from the US. Vancouver (then known as Hastings Mill) was little more than a rugged shanty town and stayed so for the next 20 years. It was a crusty place full of dirty lumberjacks, miners and drifters and whatever else somehow ended up here. 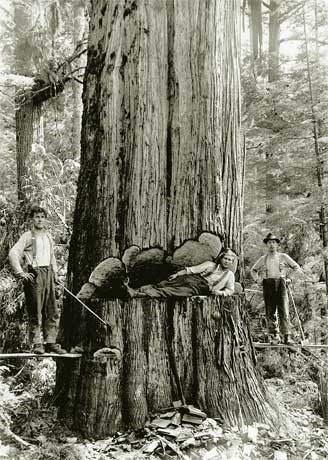 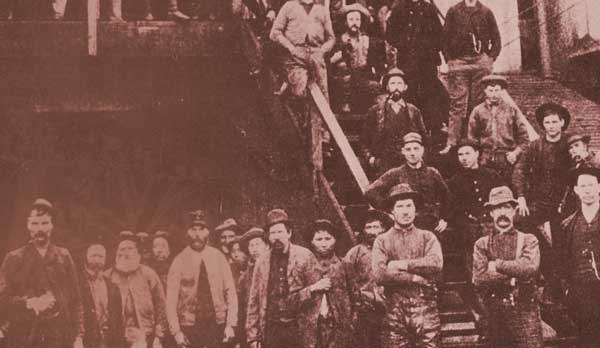 These guys worked hard, and drank even harder. As evident by the number of Saloons popping up all over town.

Then when it was decided in the mid 1880's that the new terminus of the CPR was to be Vancouver and not Port Moody as originally planned, things started to really pick up. The town started to fill up with real estate speculators, surveyors, tradesmen and railway workers (many from Yale, hence "Yaletown") brought in to start clearing land for the railyards and other facilities.

On June 13 1886, some workers were slash burning some land between Granville and Hamilton streets when the wind suddenly picked up and stoked the fire out of control. There were dry fallen trees and scrub brush everywhere and this caused the fire to turn fierce within minutes. The little town of about 800 wooden buidings was an inferno in no time!  This however didn't stop a few opportunistic guys from having a good time ... 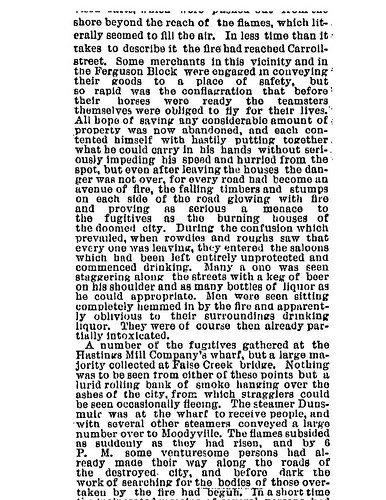 "During the confusion which prevailed, when rowdies and roughs saw that everyone was leaving, they entered the saloons which had been left entirely unprotected and commenced drinking. Many a one was seen staggering along the streets with a keg of beer on his shoulder and as many bottles of liquor as he could appropriate. Men were seen sitting completely hemmed in by the fire and completely oblivious to their surroundings drinking liquor..."

It only took 45 minutes to burn the entire place to the ground, yet these guys saw fit to rip it up like its 1899!

Once the hangover wore off, the City began rebuilding the very next day. They decided on using brick for buildings and also reckoned it would be smart to start a fire brigade too.

As terrible as it actually was, the fire gave Vancouver a chance at a fresh start. The sketchy shanty town of roughnecks was replaced with a grand City that grew and grew and never looked back. This was precisely the time when Vancouver started down the path of awesomeness!