This 1954 film explains how Vancouver's current Granville Bridge was built

You may not have ever given much thought to what was then called a "completely new and modern bridge," but this 1954 video explains the backstory of Vancouver's third Granville Street Bridge.
0
Oct 2, 2018 2:35 PM By: Lindsay William-Ross

Traffic headaches aren't anything new in Vancouver. After a half-century of tremendous growth, basically from the ground up, by 1950, the City of Vancouver knew they had to move people--and their cars--more efficiently.

A bridge built across False Creek connecting Vancouver's northern downtown peninsula to the rest of the city had been in place since 1889. That first Granville Bridge was replaced in 1909 by a "swing span" style crossing, but by 1950 that meant a lot of traffic jams as people waited for access.

The city approved a new bridge, and the City of Vancouver's engineers got to work planning. The result: The Granville Bridge we know today, with its "cloverleaf" ramps, overhead trolley wires, and...well, traffic. 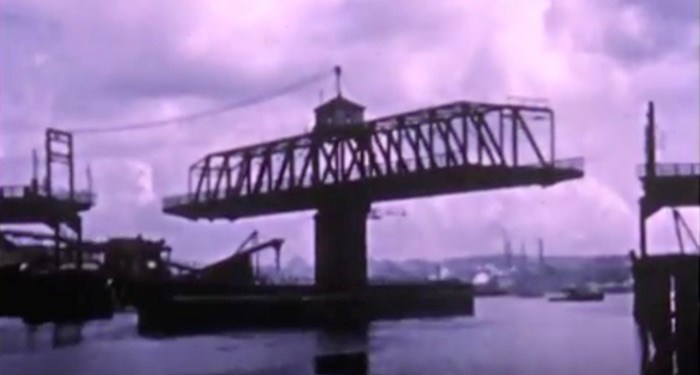 The second Granville Bridge and its swing span (Screenshot/YouTube)

This 1954 film was produced by the City of Vancouver's Engineering Department to explain how the bridge came to be, how it was built, and how it was envisioned as a way to connect "Canada's third city" across its water ways and between locales.

It includes some incredible archival imagery of the city in the early 1950s, the construction of the bridge, and opening day ceremonies.

You may not have ever given much thought to what was then called a "completely new and modern bridge," but here you go.