“There are so many elements to her personality. She’s a working woman, she’s a writer, she’s a publicity hound, she’s a celebrity,” says historian Michael Kluckner.
0
Oct 18, 2018 5:40 PM By: Vancouver Historical Society 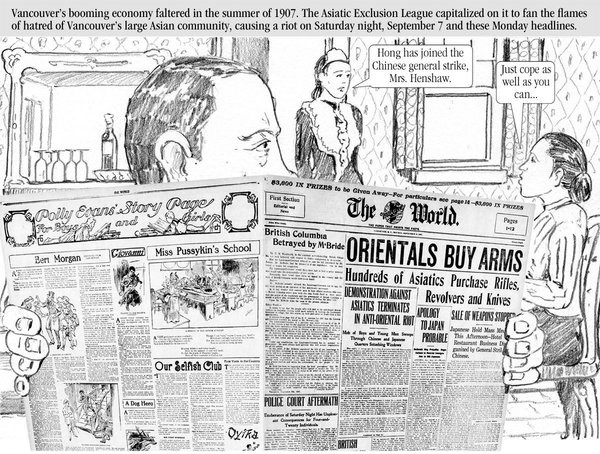 I can’t imagine many Vancouver households without a Michael Kluckner book on their shelf. He is well known for historical books like Vancouver the Way it Was (1984), Vanishing Vancouver (1990), and Vancouver Remembered (2006)—weighty, hard-backed books all beautifully illustrated with his watercolours.

In 2015, Kluckner swapped his paint brush for a 2B pencil and published Toshiko, a graphic novel about the Japanese-Canadian displacement during World War II. He followed that up in 2016 with 2050: A post-apocalyptic murder mystery, and this year Julia hit the bookstores—what he describes as a graphic biography based on the life of Julia Henshaw—a Vancouver-based novelist, journalist, socialite, botanist, explorer, and World War I ambulance driver.

When Kluckner first started looking into Henshaw’s life in 1983, he had no idea that it would take 35 years to finish. But after trolling through the archives and newspaper morgues and interviewing a grandson and acquaintances of her only daughter, he couldn’t find any personal diaries or letters that would give the book its structure.

Then the internet was invented and digital searching became possible through sites such as newspapers.com and the BC Historical Newspapers collection at UBC. Suddenly Henshaw’s columns and articles about her became much easier to find. Many of those newspaper and magazine articles that he discovered are reproduced in the book and add a layer of richness beyond what you would find in a typical history.

Kluckner’s hope is that his book will draw out primary source material such as Julia’s diaries and letters which might still exist somewhere and could eventually form the basis of a traditional biography.

He notes that biographers often insert their own opinions into their works using works like “probably.” Kluckner decided to drop himself into the narrative several times and hold conversations with Henshaw’s ghost. “I think anybody who has ever written a biography will find themselves talking to their dead subject and, with Julia’s personality being what it was, I found that she was talking back to me. So I illustrated it.”

While there is much to admire about Henshaw, Kluckner had trouble with her fervent British imperialism and class-based views.

“It’s pretty painful to read her attitude towards her need of servants,” he says. “But what’s changed? We are becoming as class-based a society as we were 150 years ago, it just isn’t as race-based.”

When Kluckner came across a 1909 column written by Henshaw with an anti-Women’s Suffrage slant, he drew himself with head in hands and wrote: “I am so disappointed in her.” Henshaw’s ghost snaps back with “Don’t judge me with your modern values!”

“There are so many elements to her personality. She’s a working woman, she’s a writer, she’s a publicity hound, she’s a celebrity,” he says. “In some ways she’s a very modern woman but also a very conservative woman and what I found, the deeper I got into it, the more I was comparing her world with our current celebrity-obsessed, extremely unequal society.”

If there’s a history lesson to be taken away from Julia, it’s that history repeats itself.

“We are recreating the social circumstances that created Julia Henshaw,” he says. “What really intrigued me was how much a reader can compare our own society with hers.”

But, as Henshaw’s ghost says: “Don’t be one of those modern biographers who is only interested in the sound of his own opinions. Writing history is about giving the past its voice, so get on with the story!”