"In order to prevent the spread of Spanish Influenza all schools, public and private, churches, theatres, moving picture halls, pool rooms and other places of amusement, and lodge meetings, are to be closed until further notice."
Mar 21, 2020 6:28 PM By: Castanet 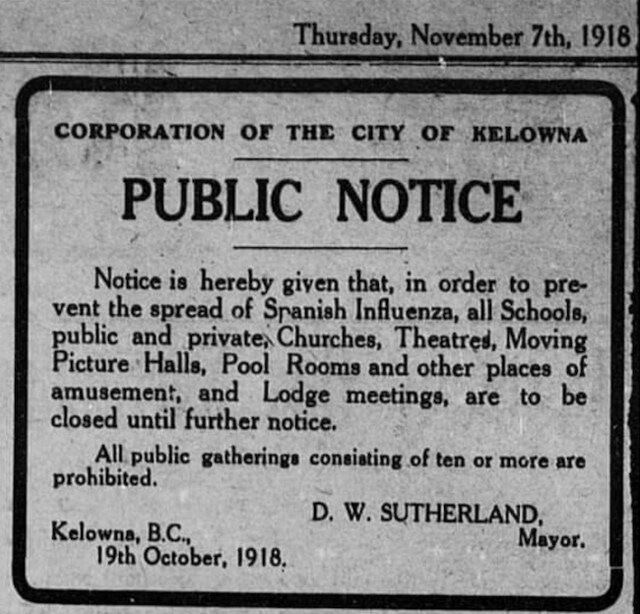 While the coronavirus is unprecedented in the modern era, the world has seen similar circumstances – such as the Spanish flu pandemic of 1918.

A public notice from the City of Kelowna on Oct. 19, 1918 stated: "In order to prevent the spread of Spanish Influenza all schools, public and private, churches, theatres, moving picture halls, pool rooms and other places of amusement, and lodge meetings, are to be closed until further notice. All public gatherings consisting of ten or more are prohibited."

Then, as now, the pandemic spread quickly – as did the reaction.

An excerpt from the Kelowna Record circa Oct. 24, 1918, five days later, reads: "The flu has reached Canada, but isn’t in Kelowna yet. People are asked to seclude themselves if they have travelled outside of the city." The article goes on to say: "To at once begin running around visiting friends is courting trouble. And – dare we say it – kissing must be barred for the present."

The Kelowna Record was only published once a week at the time, and the next edition published a story indicating public health officials were watching the situation and that a tent be placed on the public wharf for disinfecting passengers. A second article states "up to the present, Kelowna has been wonderfully favoured in the matter of escaping the prevailing 'flu' epidemic."

By the next printing, things had taken a dramatic turn, however. On Nov. 7, 1918, the Record printed the headline "four chinamen succumb to epidemic, which takes turn for the worse." The article went on say that all of Kelowna's then-Chinatown was under quarantine and that an emergency hospital was opened.

"Some twelve cases have been treated amongst white people," the article said. Children were advised not to play in groups on the street, and hand washing before eating was encouraged.

The next edition indicated the number of cases was diminishing, but the subheadline said "six orientals have died during the week, making total death roll of ten."

By the end of November, an article declared the epidemic over and printed a recommendation from the health officer that the city be reopened. But, the next issue indicated, "it appears Kelowna is not out of the woods yet as regards the influenza epidemic."

On Dec. 12, 1918, a story indicated the flu had made a comeback, and prominent figure John William Major Watson was reported to have died "somewhat suddenly."

On Dec. 24, 1918, the paper indicated there "are around 20 new cases in the city, and the ban on gathering is back on." There is also a line in a story that says "don’t let half a dozen people catch it while you are trying to make up your mind whether you have the ‘flu’ or not.”

But by the new year, the paper declared the "epidemic is practically stamped out inside city limits."

The Spanish Flu pandemic of 1918 killed an estimated 50 to 100 million people, roughly six times the number of soldiers who died in World War I.

This hotel was one of North Vancouver's most popular attractions in the early 1900s
Aug 20, 2020 6:35 AM
Comments
We welcome your feedback and encourage you to share your thoughts. We ask that you be respectful of others and their points of view, refrain from personal attacks and stay on topic. To learn about our commenting policies and how we moderate, please read our Community Guidelines.