On April 19, 1952, the Oak Street line of the BC Electric Railway streetcar system took its "last ride."

Traveling around what we now call Metro Vancouver by streetcar had a 60-year legacy. Interuban lines first started up in 1891; an "interurban" is a street-level rail line that is larger and more powerful than a streetcar, and would serve for freight haul in addition to passenger transit. 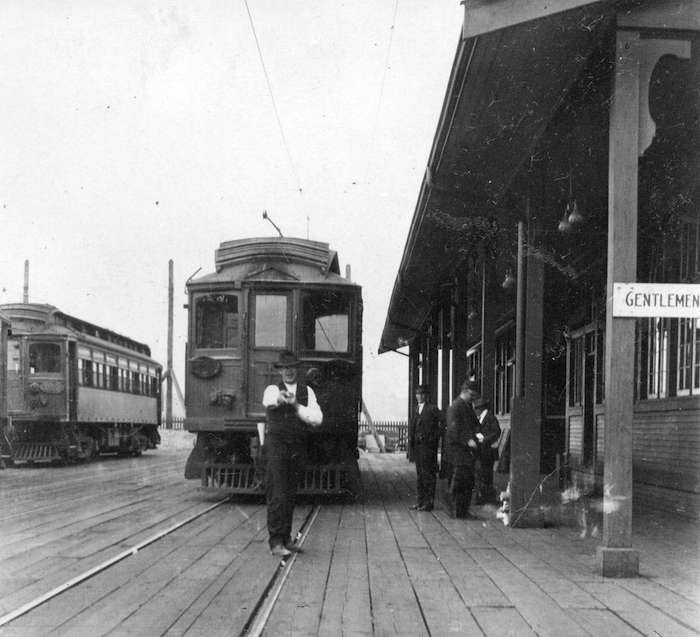 A streetcar at the B.C. Electric Railway station on the west side near the north end of the Granville Street Bridge circa 1920 (Vancouver Archives)

There were five major lines in the lower mainland, and they moved people and goods between municipalities: Central Park Line, Burnaby Lake Line, Lulu Island Line, Westminster-Eburne Line, and the Chilliwack Line.

As the Buzzer points out, there are similarities in some of those lines with Vancouver's current rail transit system; Central Park is like the Expo Line, Burnaby Lake like the Millennium Line, and the Lulu Island Line much like the Canada Line. The last interurban ran in 1958.

Meanwhile, the BCER was founded in 1897 and launched the following year. Their focus were the lighter, smaller, passenger-only streetcars. Demand is huge for the early part of the 20th century, but as vehicle travel increased, and infrastructure, like the Patullo Bridge in 1938, was created to facilitate car traffic, the demand saw a decline into the 1950s.

The Oak St. line was number 17. Ring any bells? Of course! The current bus route that uses Oak is also the number 17.

Check out these BCER maps from the 20s and 30s: 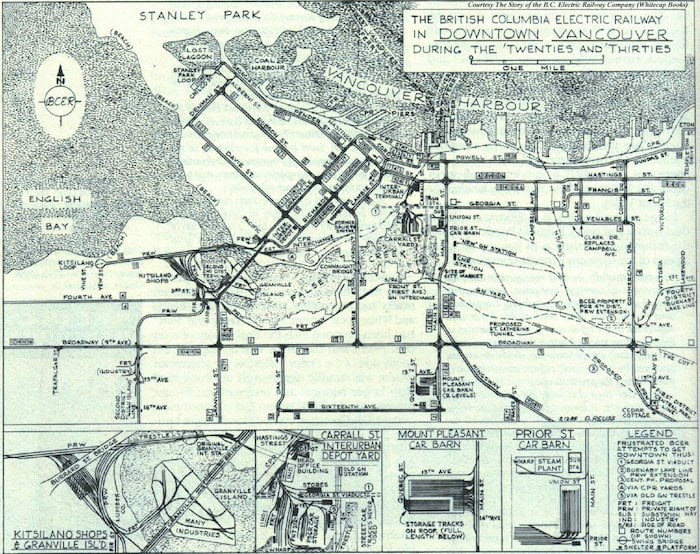 Map via History of the B.C. Electric Railway Company 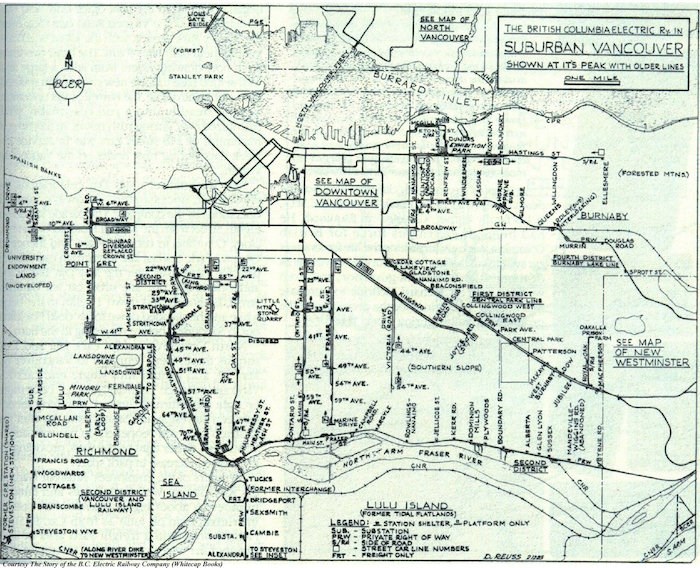 Map via History of the B.C. Electric Railway Company

By the late 1940s, Vancouver was turning streetcar and interuban lines into bus routes, running trolley buses. Fraser-Cambie was the first trolley route. There was a widespread "rails to rubber" conversion program in place for public transit in the region.

So, as part of the nearly decade-long plan, the Oak Street line had its last riders on April 19, 1952.

On this day in 1952, the last ride of the Oak St #StreetCars took place. This is the invitation & ticket for that ride https://t.co/ksUzrcWoTD [Link to description of item. Item has not been digitized, but can be viewed in our reading room.] #bctransit #vantransit pic.twitter.com/spkY8IXfv9

This video shows a ride on the Oak St. line. Recognize anything?

If you are curious to see an old Vancouver streetcar, you'll have to ditch your foodie cred and embrace your inner child: There's one on display at the Old Spaghetti Factory in Gastown.

Time Traveller: This legendary hardware store supplied the North Shore for nearly a century
Sep 19, 2021 8:54 AM

Time Traveller: Dig out your old home movies to share in this worldwide amateur film event
Sep 12, 2021 8:57 AM