Eighty years ago Vancouverites first walked across a new span from Stanley Park to West Vancouver – a bridge that was to be the entrance to Greater Vancouver, like another famous bridge in California. The Lions Gate Bridge opened to pedestrians on Nov. 12, 1938, and to cars two days later.
0
Nov 13, 2018 4:01 PM By: Maria Rantanen

Eighty years ago Vancouverites first walked across a new span from Stanley Park to West Vancouver – a bridge that was to be the entrance to Greater Vancouver, like another famous bridge in California. The Lions Gate Bridge opened to pedestrians on Nov. 12, 1938, and to cars two days later. 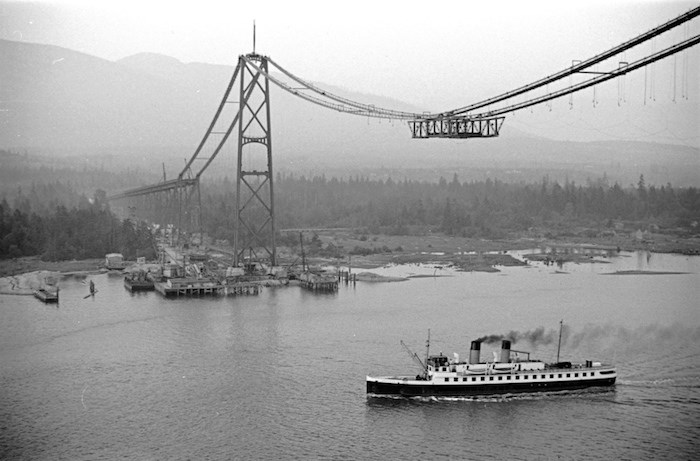 West Vancouver archives show articles going back to 1926 that describe the construction of the bridge, initially called the “First Narrows Bridge.” The West Van News, in a front-page article on May 14, 1926, declared that “Lion’s Gate” was a better name as the entrance to Greater Vancouver.

“(First Narrows) is not a distinctive name for the entrance to a channel nor is it an euphonious one,” declared the West Van News. The article goes on to cite the name of the “Golden Gate Bridge” in San Francisco, how it is known worldwide as the entrance to the “Golden State of California.” Using the name “Lion’s Gate” would “do more to advertise the attractions of Greater Vancouver than the continued use of so common and kindergarten a name as ‘First Narrows.’”

The bridge was built by the Guinness family to encourage people to move to their newly acquired British Pacific Properties, 4,000 acres of prime real estate that they purchased for $75,000 with a promise to build amenities to go with the homes planned for West Vancouver. BPP spent $6 million building the bridge, $102 million in today’s dollars.

Geoff Croll, the current president of BPP, said the Lions Gate Bridge transformed North Vancouver and West Vancouver from “sleepy little cottage communities” to what they are today, thanks to the foresight of a local engineer and entrepreneur, Alfred James Towle Taylor. 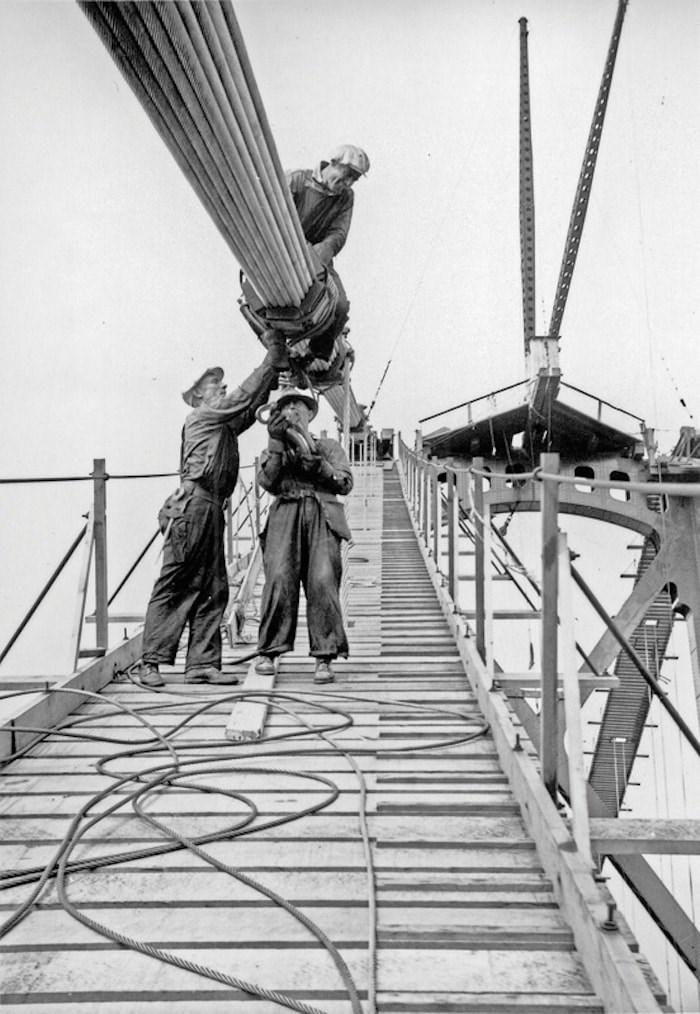 “What I find fascinating is the vision of A.J. Taylor who really pushed that project forward,” Croll said. “He was a visionary who really saw the potential of what that bridge could do.” This was especially impressive, given there was no money from any level of government, significant public opposition and stalling from the federal government.

“I find the persistence and drive of A.J. Taylor to make that happen – when a lot of other people would have given up or walked away from it – it’s a real testament to his vision that it went through,” Croll said.

Croll said he’s impressed at the ingenuity of the bridge design and points out it was used as a model for building other bridges.

“As an engineer, I marvel at how quickly they built it – at the time it was the longest span of the British Empire,” Croll said, adding that they needed to use new technology, a new design and new ways of construction to build the bridge. Later, similar bridges were built throughout the world.

“It was a feat, not just for our company but I think for the entire region,” he said.

But for Croll, it’s not just the engineering aspect of the bridge that impresses him.

“The esthetics of the bridge, something about how it’s like a gateway to the harbour...There’s an emotional impact there, not just a technical [one],” Croll said.

For Expo 86, the Guinness family donated lights that illuminate the bridge at night, nicknamed Gracie's Necklace after MP Grace McCarthy, who co-ordinated the gift. 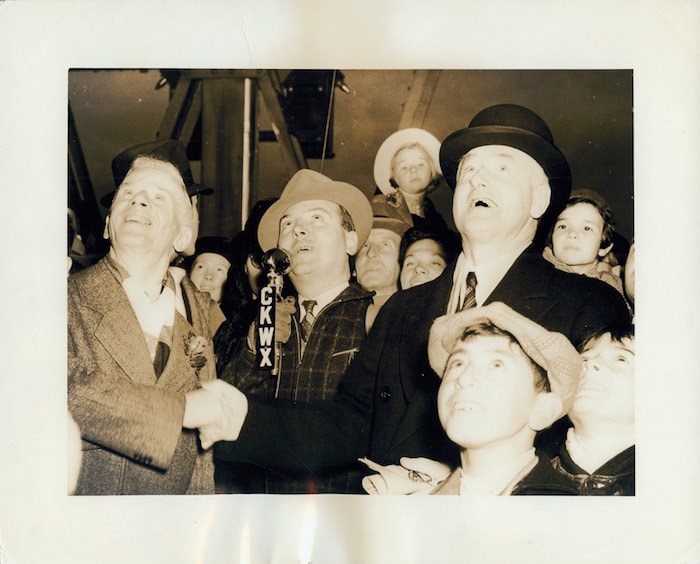 Official opening of Lions Gate Bridge. West Vancouver Reeve Joseph Leyland and Vancouver Mayor George Miller standing with a reporter from CKWX and a group of children on the bridge. They are looking up at a photographer in the steel girders of the bridge. Photo courtesy West Vancouver Archives

There was talk already in 1914 of building a bridge, but in 1926, this talk got serious and funds were put aside to build it. However, the citizens of Vancouver in a plebiscite that year rejected the idea of a bridge and it was put on ice. Opposition to the bridge partly stemmed from the fact the access point would be Stanley Park, which meant a road through the pristine greenspace.

However, on Sept. 19, 1930, there was a shipping accident that knocked the Second Narrows Bridge out of commission for four years. Opposition to the plans for a new bridge at First Narrows quickly dissipated when the Second Narrows connection was gone.

In June 1930, the First Narrows Bridge Company was formed out of two companies. But Taylor didn’t have enough capital to build the bridge, so he approached the Guinness family. A deal was made that the Guinness family would buy 4,000 acres in West Vancouver for $75,000 and they formed the British Pacific Properties.

A plebescite on Dec. 13, 1933 in Vancouver finally gave a green light to the project.

Everything was in place to build the bridge, except the federal permit. The prime minister of the day, R.B. Bennett, was asking for a span of 1,800 although the plan was for a 1,500-foot span.

Federal assent was given on April 29, 1936 after Bennett’s Conservative government was defeated and even more political intrigues within the Liberal government.

By 1998, it was in rough shape, but the province decided, instead of rebuilding the bridge, to refurbish it.

The Lions Gate Bridge was transformative for the North Shore, and benefited many others, not just BPP, Croll said.

“As far as I can tell, we are the only developer on the North Shore that put any money into infrastructure like that and every other developer who’s come since has had the full benefit of that bridge being there,” Croll said. “We certainly did more than what was required of us as a land developer.”

BPP has been planning its next vision – the Cypress Village development in the Upper Lands, a complete community where residents can live, work and play, Croll said, 12 minutes from the beach and 12 minutes from the ski slopes with a private transit service. This, he believes, is the vision that’s needed to wean the region off single-occupancy cars and fight the gridlock.

“If we do this right, we can show the region that this is a way forward,” he said. “We call this village our bridge to the future. We think what the Lions Gate Bridge was to the 1930s, the Cypress Village can be to West Vancouver in 2018.”