The lumberjack statue marking the former Clarke Sawmill near Mile 62 was destroyed after someone shot a flare at the family's Halloween decorations and started the fire.
Oct 28, 2019 1:05 PM By: Glacier Media 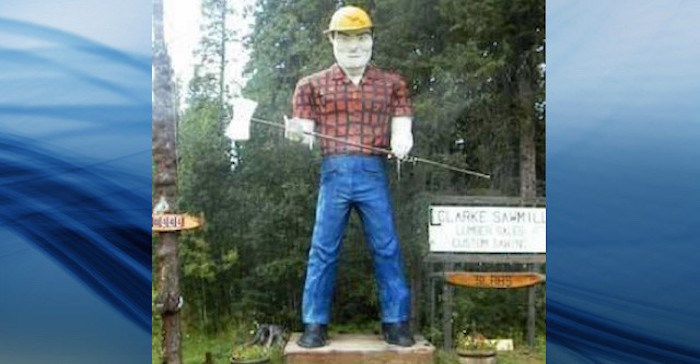 The Lumberjack statue that marked the site of the former Clarke Sawmill along the Alaska Highway was destroyed by fire. Photo via roadsideamerica.com/

A familiar landmark along the Alaska Highway was destroyed by fire Sunday night.

The lumberjack statue marking the former Clarke Sawmill near Mile 62 was destroyed after someone shot a flare at the family's Halloween decorations around 9:15 p.m. and started the fire, according to family. There was no immediate description of any possible suspects.

"He was a landmark that not only advertised our sawmill when it was up and running, but was also a place to sit and wait for the school bus, something to look forward to seeing after a very long trip and, basically, the best thing ever to tell people about and a huge piece of my life," Debbie Lee Clarke wrote in a Facebook post.

On Monday morning, Clarke said she was thankful the fire was contained, and did not spread to her family's home. The police are involved, she said, and the family is discussing its next steps.

"I’m still trying to wrap my head around this," Clarke said.

According to Heritage Buildings of the North Peace, the statue was an old Pacific Pete that stood at the former Pacific 66 gas station along the Alaska Highway through Fort St. John, now a Petro Canada station, before it was moved and updated. Over the years, the statue has been dressed as Santa to mark the holidays, and has even held a toothbrush to promote dental hygiene.

The website RoadsideAmerica.com listed the landmark as the northernmost "Muffler Man" statue in its records, a style of statue popularized in the 1960s and '70s.