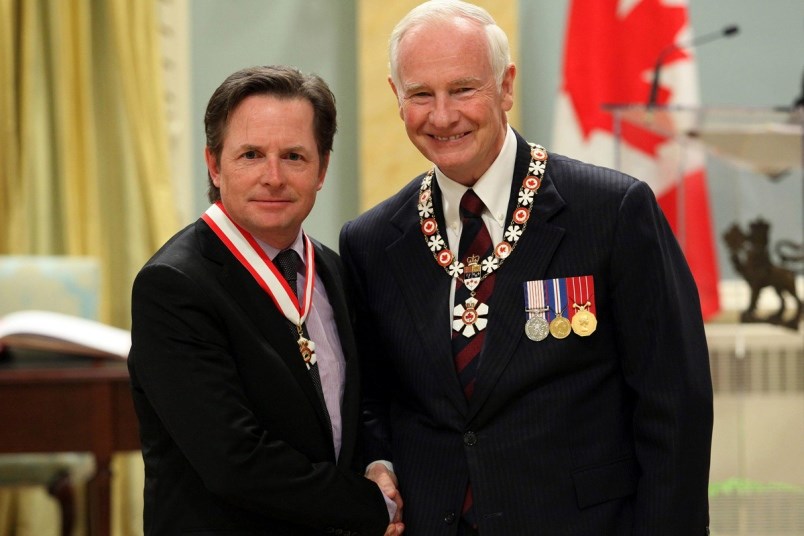 Becoming an officer of the Order of Canada in 2011, Michael J.Fox is pictured here shaking hands with Governor General David Johnston at Rideau Hall in Ottawa. Photo: Canadian Press

Here's an interesting read from the Delta Heritage Society’s Delta Stories series, written by the society’s Barbara Baydala and republished here with permission.

A few years ago while reading Michael J. Fox’s memoir "A Lucky Man" I was intrigued to learn that his mother and father had met at a local dance in Ladner.

I had spent many hours volunteering in the Delta Archives and knew we had an incredible diversity of information about the community of Delta.

I wondered if I could find any reference to Michael’s family in the Archives’ collections.

From the book, I knew I was looking for the Piper family and started my search in the obituary and community registers files.

At that time the family was living on Westminster Avenue and had been in Ladner for 14 years.

Harry was a customs agent at Boundary Bay and active in the local Legion.

I discovered in a 1948 BC Directory listing that Michael’s mom Phyllis had worked at the Optimist and turned my attention to old copies of the Ladner Optimist, as the local paper was then called, that the Archives have preserved on microfilm.

I started in 1942 and was quickly immersed in wartime Ladner.

The Pipers were active members of the community often mentioned in the Local Happenings column.

I learned that Harry had managed the Legion bowling alley, that Michael’s uncles Scott and Stuart had been prisoners of war in WW2 and that community dances were a really big deal in Delta in the 1940s.

But that was just the beginning of the story.

Stay tuned for more as we continue telling Delta’s Stories.

If you’ve done research in the Archives and made discoveries you’d like to share please write them up and send them to us at info@dmasociety.org