In 1911, about one-third of the single-family dwelling building permits in North Vancouver were issued for temporary housing!
May 23, 2020 7:50 AM By: North Shore News 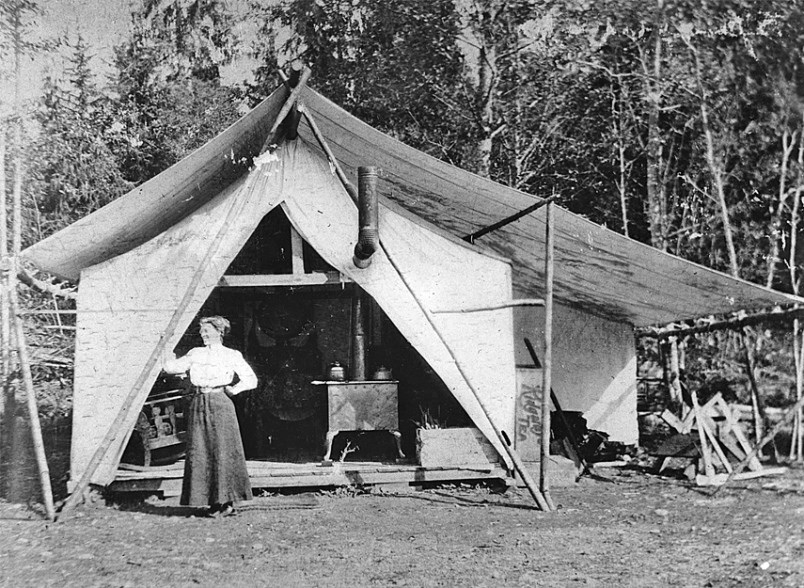 In 1911, when this photo was taken, North Vancouver was in the midst of a building and population boom.

Newspapers were full of stories about the rising price of real estate and the scarcity of rental properties – sound familiar?

Many people began the path to home ownership by purchasing and clearing a lot, then living on it for a while in a shack or permanent tent.

In 1911 about one-third of the single-family dwelling building permits in North Vancouver were issued for temporary housing.

And the local newspaper advertised furnished canvas tents for rent at $2 per month. This photo shows the tent in which Evelyn and Albert Elliott (recent emigrants from England) lived in for a year and a half. Their tent was on a lot they owned, located behind Mr. Smith’s Store at the end of the Capilano streetcar line.

The Time Traveller feature offers a weekly glimpse into the North Shore’s past, courtesy of North Vancouver Museum and Archives.

For more information about the history of the North Shore and to learn about the new Museum of North Vancouver opening in late-2020, visit nvma.ca and sign up for our e-newsletter at bit.ly/35MWr83. Currently, the Archives of North Vancouver at 3203 Institute Rd. in Lynn Valley is open by appointment only, contact: archives@dnv.org