Tommy Horne couldn’t have seen it coming. The goaltender for the 1941 Vancouver Norvan Shipyards and his team were up 3-1 against the Nanaimo Clippers in the final period, but tensions and penalties were mounting.
Mar 14, 2020 9:24 PM By: Brent Richter 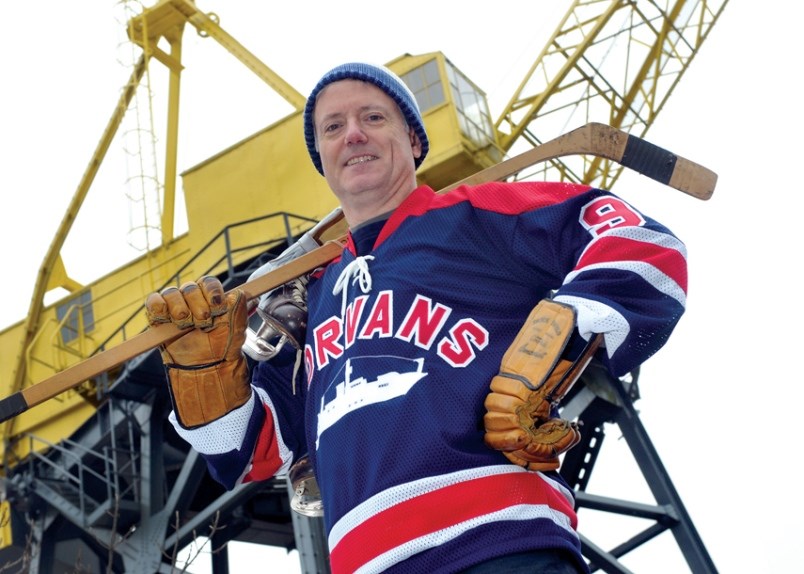 Tommy Horne couldn’t have seen it coming. The goaltender for the 1941 Vancouver Norvan Shipyards and his team were up 3-1 against the Nanaimo Clippers in the final period, but tensions and penalties were mounting.

Then a “rabid Up-Island fan” tossed a lit cigarette down the back of his sweater. The suspect disappeared in the arena crowd before the cops could find him, but the damage was done. The Clippers scored six unanswered goals before the game was out.

Horne’s story is one of dozens North Vancouver amateur hockey historian Chris Mizzoni has unearthed in his bid to revive the name and reputation of a hockey team based in North Vancouver’s bustling wartime shipyards.

Mizzoni learned of the Vancouver Norvan Shipyards, more commonly known as the Norvans, through the Society for International Hockey Research, which offers members access to its massive database of photos and stats.

“I searched some players and I found he played in 1941-42 for the Norvans. So then from there, I just thought ‘Okay, what the hell is this?  I’ve never heard of this,’” he said.

Mizzoni searched for what he could online but evidently, no one had written a word about the team since the advent of the internet. It was only from the sports pages of newspaper archives, particularly from the Vancouver Sun and the Victoria Daily Times, that the story could still be pieced together.

During the war, it was common for employers to provide robust recreation options for their staff. The Burrard Drydock, which employed upwards of 14,000 shipyards workers, was said to have the largest bowling league in Canada. Sponsoring a team for their workers and families was entirely in keeping with that, said Francis Mansbridge, a North Vancouver history writer.

“These were very important in building morale. And people developed an extraordinary attachment to the shipyard and it did become like an extended family,” he said. “There was a tremendous feeling of people getting behind the war effort and I’m sure this would be considered as part of the war effort, to support the Burrard hockey team.”

Norvans games were mostly played on Friday and Saturday nights at the Vancouver Forum, which still stands today in Hastings Park, and proved to be one of the hottest tickets in town.

“The Forum could pack in 5,000 people back in the day they would fill it,” Mizzoni said.

The season kicked off on Nov. 10 with the Norvans hosting the Clippers, but mere days before puck drop, the local team still didn’t have a name. A Victoria Daily Colonist clipping Mizzoni stumbled upon reported the Burrard Dry Dock owners hadn’t settled on whether they would be the Vancouver Norvans or the Corvettes, after the navy patrol and convoy escort vessels the company was building to protect merchant ships from German U-boats.

Ultimately the name Norvans stuck, and the newly christened team won their debut game against the Nanaimo Clippers 5-3. It proved to be the very definition of “old-time hockey.”

The Clippers’ right winger Jimmy Neilson was “banished” in the final minutes of the game, stemming from a heated argument “during which he is alleged to have deliberately tripped referee Carl Jacobs.”

The Norvans won their second game against the Victoria Bapcos, which the writer attributed to an unfair handicap – Willows Arena in Victoria hadn’t got its ice in before the season started and the team hadn’t had a chance to practise.

Norvans fans getting excited for a hot streak, however, got a cold dose of reality most hockey fans today can relate to. Their team was wildly inconsistent, going on to lose the next seven straight, including a 12-4 mollywopping by the New Westminster Spitfires and a 10-7 loss to Nanaimo, in which the Norvans let in eight goals in the third period alone.

The Norvan team was at the bottom of the standings on Dec. 7, 1941, when the Empire of Japan attacked Pearl Harbour.

News articles from the days that followed warned of Japanese planes off the coast of Alaska and California. Cities up and down the West Coast were subject to blackouts from 5 p.m. until dawn and almost all radio broadcasts were to cease as of 9 p.m.

“Places of amusement and business establishments will extinguish all outside lights, including electric signs, and inside lights must be arranged to show the minimum possible to the outdoors,” a news article stated at the time.

The league’s president cancelled all future games until he could seek direction from the military. They quickly decided to adapt and get back on the ice.

“They said, ‘Well, we need to keep society going and entertain people and get their minds off it. So they went back to playing hockey,” Mizzoni said.

For the arena managers in the league, that meant painting all the windows and skylights black.

The downtime helped the Norvan team get over some injuries they’d acquired and they were able to recruit some new players. And around that time, Norvans coach and occasional right-winger Tip O’Neill used the age-old dressing room dressing down to motivate his players.

“You fellows get out there and play hockey from now on or you’ll be looking for work somewhere else!” he was quoted saying.

By mid-December, the team had found a way to win again and nearly caused a riot in the process, an article of the day noted.

“With only seconds remaining to play, the players engaged in a free-for-all on the ice and Art Schuman, Vancouver and Ed Trites of the Spitfires, were penalized. They attempted to continue the fight in the stands and spectators joined in, but police intervened and stopped the fracas,” it read.

The team didn’t lose again until January 1942 while on a road trip to Victoria. There, Schuman was involved in another on-ice tilt “gleefully appreciated by some 1,800 howling fans.”

“Schuman dived for the Bapco rearguard in what was apparently intended for a flying tackle and the big fellow braced for the attack, met the onslaught with a series of effective uppercuts,” the next day’s paper reported.

Schuman finished the season with a team-leading 44 penalty minutes in 18 games.

“There were a lot of brawls back then,” Mizzoni said.

For a time that month, all four teams were tied in the standings, which raised questions over which three would be eligible for the playoffs. But by the end of January, the Norvans were back in the basement, thanks to a losing skid, including the game with the cigarette incident in Nanaimo.

In the final weeks of the season, hockey proto-superstar Fred “Cyclone” Taylor successfully lobbied for Montreal Canadiens veteran Jack Riley to be declared an amateur and eligible as a free agent for the league. Riley quickly signed with the Norvans and in six games, racked up five goals and nine assists, helping the team to a strong finish in their 13-12-3 regular season.

On Feb. 20, the Norvans and the Clippers met for their first playoff game. The Norvans were soundly spanked 9-2. The next night, they suffered a 4-3 loss in Nanaimo in a game filled with “rough-house tactics that developed into a near battle-royal,” the Daily Colonist reported. Facing elimination, the team found one final 4-3 win, keeping their playoff hopes alive, but it was short lived. On Feb. 27, the Clippers dealt the lackluster Norvans one final 7-0 rout, ending their playoff run.

The Clippers went on to win the league championship, beating the Victoria Bapcos in four games.

Just three weeks after the last game of the season, the first group of Japanese Canadians arrived in Hastings Park for internment. After the ice was out, the Forum became a holding facility for Japanese-Canadian boys age 12 to 17.

The league folded later that year. One of the players, Jimmy Smith, went on to play for the Vancouver Canucks in their inaugural 1945 season in the Pacific Coast Hockey League. Schuman went to play for their rivals, the Seattle Ironmen and Portland Eagles.

Though he has been a Lower Lonsdale resident for the last 20 years, Mizzoni remains loyal to his hometown Toronto Maple Leafs. And his den shows it. Mizzoni has collected hundreds of hockey artifacts dating back to the 1930s. What he doesn’t have, though, is anything from the Norvans, except a replica hockey sweater he had custom made by local designer Brendan Jang, based on the one published photo of the Norvans logo Mizzoni could find in the archives.

Mizzoni is hoping as word about the team spreads, more artifacts will surface.

“There’s got to be a program out there or something or photo. I’m always scouring,” he said.

As Mizzoni built up his research on the Norvans in the summer of 2015, he began writing about them on his hockey blog nitzyshockeyden.blogspot.com. Eventually, he plans to publish a history of the team for the Society for International Hockey Research.

“I thought ‘This my home now. Let’s put some names behind this and make them known,’” he said.

An animator and graphic designer by trade, Mizzoni has also published two children’s books about hockey: Clancy with the Puck and The Sterling Seven, Hockey’s First Team Ever.

This weekend, the modern world of hockey was destined to come back to the Norvans’ turf. But on Wednesday, Sportsnet announced it was cancelling the Rogers Hometown Hockey Tour, which had been scheduled for two days of festivities in the City of North Vancouver’s Shipyard Commons. On Thursday, the NHL announced the entire season was being suspended, the first time since 1919 when the Spanish Flu pandemic was sweeping the world.

Mizzoni had planned to be front and centre Saturday promoting the history of the Vancouver Norvan Shipyards. Instead, he’s loaned his Norvans sweater to the North Vancouver Museum and Archives, which will put it on display.

Mizzoni said he hopes people will come away having learned a thing or two about the team that once wore the Vancouver Norvan Shipyards crest and battled on the ice to do their part in the war effort.

“People in Lower Lonsdale, they know about the shipyards history,” he said. “But the fact that there was a hockey team representing the shipyards, that’s pretty damn cool, I thought … maybe a little plaque or something would be nice.”