Port Coquitlam’s Terry Fox inspired millions of Canadians on his Marathon of Hope in 1980. A few locals share their memories of their hometown hero.
0
Sep 14, 2018 2:21 PM By: Janis Cleugh

Port Coquitlam’s Terry Fox inspired millions of Canadians on his Marathon of Hope in 1980.

And, over the years, the foundation in his name — which continues to be run by his family and others — has collected more than $800 million to help fight the disease that took his life a year later.

The Tri-City News asked local residents and officials what they remember about the hometown hero. Here are some of their responses, which have been edited for grammar, clarity and space:

“My dad drove a gravel truck and would see him all the time. We did not know that he was training. When he started his run, it was when our family got its first taste of cancer as my grandmother got throat cancer. She was so happy he was helping raise money and awareness for cancer.” - Russell Machardy

“Terry Fox has been a part of my life for as long as I can remember: going to soccer games at PoCo High, and watching and listening to his Marathon of Hope. Terry has been a personal inspiration and, when I became mayor, I asked the Fox family for a picture of Terry to hang in my office. For the past 10 years, Terry has been top of mind and, when a situation gets hard, I reflect on Terry’s inspiration.” - Port Coquitlam Mayor Greg Moore

“I rode on my bicycle beside him and talked with him as he ran down Ioco Road.” - Garrett Gronick

“Terry Fox inspired me every day when I was training for the Olympics. Every time I was exhausted or felt sorry for myself, I thought about Terry running a marathon a day — in all types of weather — to raise money to help others.” - Coquitlam Coun. Chris Wilson, executive director of KidSport Tri-Cities 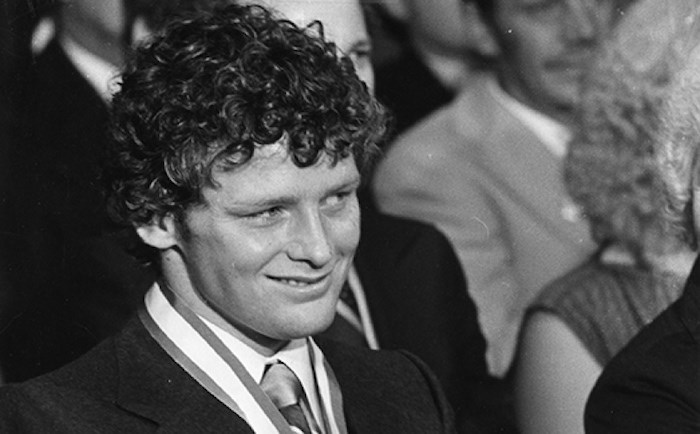 Terry Fox became the youngest Companion of the Order of Canada, at a special ceremony at Port Coquitlam city hall on Sept. 18, 1980. Photograph By COURTESY OF THE POCO HERITAGE MUSEUM AND ARCHIVES

“He lived about six blocks from my house in Port Coquitlam and I would see him out jogging in the morning as I was going to work. This was before his run started and I didn't know who he was. An amazing man.” - Darlene Montgomery

“As the [Marathon of Hope] progressed and the media coverage became daily, I became more and more enthralled by this guy. Being young and from Port Coquitlam — and having seen him around the community — [Terry] was probably the first connection I had to exposure on the national stage. It helped me develop a real sense of pride as I watched Terry meet with children, adults and dignitaries…. Even at my young age, I started to really feel like a Canadian and to be really proud of my country.” - Port Moody Mayor Mike Clay, organizer of the Port Moody Terry Fox Run

“At 11 years old, I followed Terry's Marathon of Hope via TV, radio and newspaper. When he reached Mississauga, Ont., in the in the summer of 1980, I saw him (or least his head) run by as thousands of people cheered him on. He was incredible to me: determined, selfless, articulate and inspiring.” - Dave Teixeira, 15-year organizer of the Port Coquitlam Terry Fox Hometown Run

“I remember frequently seeing a determined young man with a distinctive gait on his training runs along Ioco Road. At the time, of course, he was not yet a household name; however, after he began his cross-country run for cancer, I would often reflect on seeing him on his training runs so close to home in the Tri-Cities. A local lad who had a remarkable impact on all Canadians.” - Belcarra Mayor Ralph Drew

“Nineteen years ago, I was diagnosed with breast cancer. I knew that, because of what Terry had started and what so many people have continued today, I had a very real chance of surviving a Stage 3 tumour. More than 13 years ago, I came to work for my hero. Not too many people can say they go to work for their hero every single day but I can. He gave me my life and it is now my passion to continue his dream and the legacy that he has left with us all to take up that torch and his dream.” - Donna White, director of the BC/Yukon branch of the Terry Fox Foundation.

Their longest day: Three Canadian veterans reflect on their role in the D-Day invasion and the emotional aftermath
Jun 6, 2020 4:38 PM

Longshoremen were a big part of this North Vancouver neighbourhood's early history
May 31, 2020 10:23 AM