You probably don't know the real story of Sasquatch (WITH VIDEO)

In this episode of our BC Was Awesome show I travel to Harrison Hot Springs and the Sts'ailes First Nation Reserve to dig up the real story of Sasquatch.

In this episode of our BC Was Awesome show I travel to Harrison Hot Springs and the Sts'ailes First Nation Reserve to dig up the real story of Sasquatch.

I went on a "hunt" for one, sat down with a number of people who claim to have seen the thing, and got the origin story of it from Kelsey Charlie of the Sts'ailes First Nation.

In the 1920s, a white Indian Agent from the government became immersed with the Sts'ailes people. In his time with them, he heard them speaking of a hairy man of the woods and how they revered and honoured him.

As Kelsey Charlie tells me, the name of the creature is Sasq'ets, and it's a supernatural being that is one of the most important symbols to the Sts'ailes nation. For millennia it has been looked upon as having a spirit power.

The Indian Agent wrote about the creature in Maclean's Magazine, misspelling the word as Sasquatch, or perhaps simply anglicizing it.

It has been known as Sasquatch to the general public ever since.

Whatever you call it, as Charlie tells me it's a shape shifter.

The creature goes from from physical form to spiritual form and as a result, "That's why people will never ever catch him."

BC Was Awesome is a British Columbia history TV show co-produced by Vancouver Is Awesome and Artaban Productions. A book of the same name is set to be published in time for the province's centennial celebrations in 2021. Watch all of the episodes for free on OUR YOUTUBE CHANNEL. 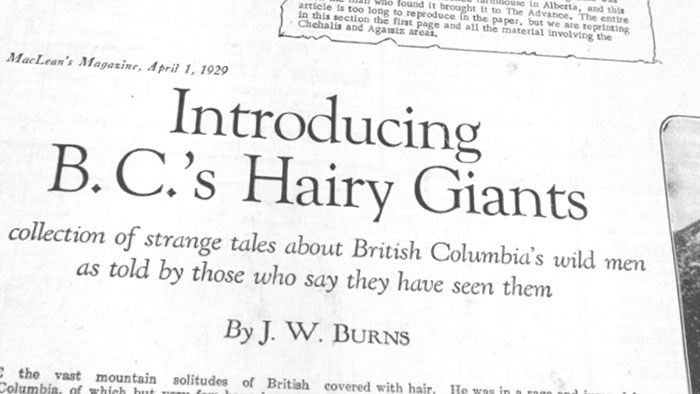 We bring you the real story of Sasquatch, a made-in-B.C. legend. Screengrab