Novelty architecture like this "Old Dutch Mill" became popular as travel by automobile increased in the 1930s
Jul 31, 2020 10:11 PM By: North Shore News 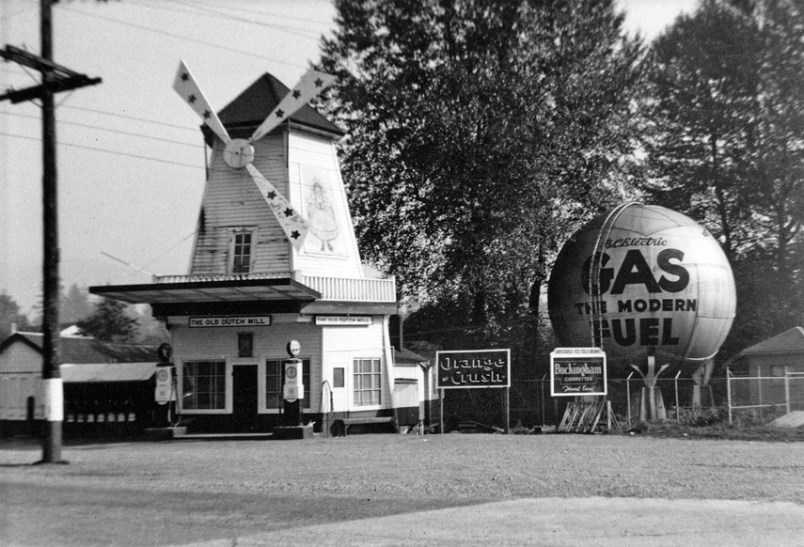 The Old Dutch Mill service station and confectionery, shown here in 1943, is a great example of “novelty architecture” (a.k.a. fantastic architecture) from the North Shore's past.

Constructing novelty architecture near roadways became one way of attracting motorists and customers. The style became popular in North America as travel by automobile increased in the 1930s.

This image shows the Old Dutch Mill building and gravity gas pumps. The building was a two-storey, six-sided structure, built in the style of a Dutch windmill.

The other striking structure in the image was a well-known local sight: the “gas ball,” a spherical storage tank. It was once used for North Vancouver homes and businesses when the raising of the Second Narrows Bridge to allow ships to pass under the span interrupted pipeline supply.

Built in 1929, the Old Dutch Mill service station was located at the corner of Main Street at Mountain Highway (originally St. Denis Avenue). It was demolished in the 1950s.

For more information about the history of the North Shore and to learn about the new Museum of North Vancouver opening in late-2020, visit nvma.ca and sign up for the museum’s e-newsletter at bit.ly/35MWr83.

Currently, the Archives of North Vancouver at 3203 Institute Rd. in Lynn Valley is open by appointment only. Contact: archives@dnv.org.

BC Ferries' oldest vessel up for sale on Craigslist (PHOTOS)
Jul 20, 2020 2:06 PM
Comments
We welcome your feedback and encourage you to share your thoughts. We ask that you be respectful of others and their points of view, refrain from personal attacks and stay on topic. To learn about our commenting policies and how we moderate, please read our Community Guidelines.