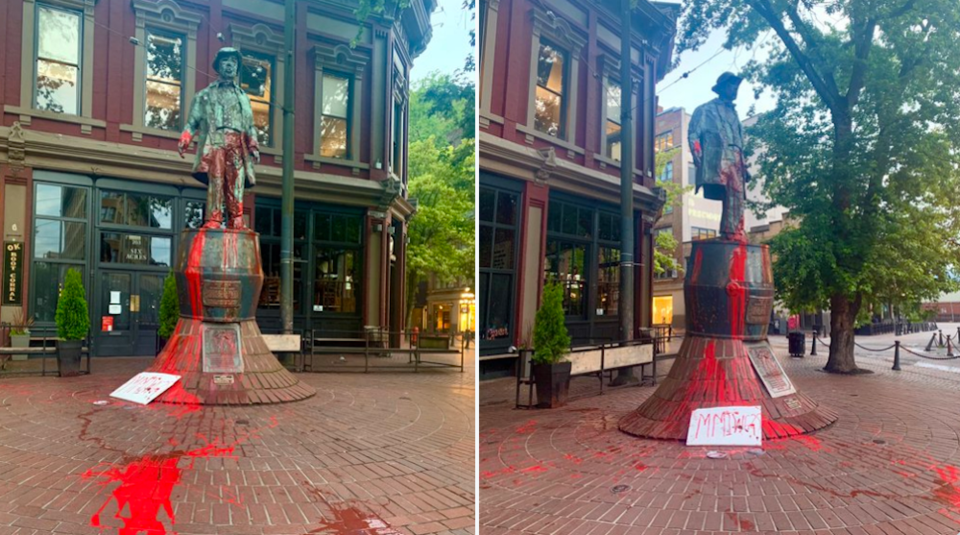 We recently brought you the news that a petition was launched, aiming to remove the Gassy Jack Deighton statue in his namesake Gastown.

Protestors had splashed red paint on the now-divisive figure, and the petition brings to light the fact that Deighton had married a 12-year-old girl from the Squamish Nation. She gave birth to his son the following year.

As of the time of this writing, 10,218 people have signed the petition calling for the statue's removal.

The Squamish Nation released a brief statement this weekend, succinctly telling the history of Deighton and his wives and requesting that the Nation be involved in decisions around the telling of their history, and actions taken in their name.

Their full statement is below.

June 20, 2020, North Vancouver, BC — The Squamish Nation has been asked to comment on the future of the Gassy Jack statue in the historic Gastown district of the City of Vancouver.

John Deighton, also known as Gassy Jack, immigrated to Squamish Nation territory from England. Around the late 1860s, Gassy Jack married a Squamish woman. She then died around 1870. After her death, he married her niece, a 12 year-old Squamish young woman who was known as Madeline, or X̱áliya. In 1871, they had a son together named Richard Mason Deighton. Gassy Jack and Richard reportedly later died in 1875. After Gassy Jack’s death, Madeline (X̱áliya) remarried a Squamish man known as Big William. They have descendants in the Squamish Nation today. Madeline died August 10, 1948, aged 90 in North Vancouver.

The Nation will not be making any further public comment about this issue at this time.

These incredible, historic photos from the Klondike Gold Rush were recently gifted to UBC
May 7, 2021 4:07 PM