Strathcona's a blight? Say it ain't so!

Every City has its "planners". These people get the task of designing the City and making our town a better place to live. Now they can come up with some pretty great ideas like: Granville Island or the Seawall.
Kevin Kelly Apr 11, 2009 12:38 AM

Every City has its "planners".  These people get the task of designing the City and making our town a better place to live.  Now they can come up with some pretty great ideas like:  Granville Island or the Seawall. And some darn kooky ideas like flattening Strathcona!

Well, it would seem back in the day (as today) there were planners feverishly working on shedding Vancouver of its quaint little city vibe and bringing it up to speed with the concrete jungles of the modern industrial world. More highrises! Expressways! Malls! Subdivisions! And cars,cars,cars!

If you've ever wondered  for instance why that highway sized bridge known as the Georgia Viaduct spills you from downtown onto a narrow 4 lane road - Prior St.  Its because that was supposed to be part of a freeway network in the city. To make this happen, much of Gastown, Chinatown and Strathcona was to be mowed down to make way for some serious asphalt!

This was coupled with earlier plans to transform Strathcona into block after block of planned concrete apartments. You know..PROJECTS!   Don't believe me?  Check these out... Part 1 Part 2

Thankfully the social minded folks in this town spoke up and said "no way to freeways!".  They felt that these plans could erase much of our city's cultural heritage and turn us into an ugly, grey, faceless place.

“A San Francisco-based firm concluded that a waterfront freeway would best be served by levelling 600 houses in Strathcona and laying a ten-metre-high overpass over Carrall Street, in the centre of Chinatown.

Immediately, protest came from every part of the city, and a crowd of 800 people gathered in City Hall to shout down the consultants' proposals. The Chairman of the city's planning commission resigned on the spot, and a year later, the plan was scrapped. Apparently, the spirited editorializing of the local papers in favor of cutting out civic blight with a concrete knife had influenced no one but a handful of architects.”

In the end only a few of these projects went up and the freeway plan was scrapped. While there's many among us now (likely sitting in traffic) that regret this move. I for one applaud those that fought tooth and nail to keep this town real, unique and awesome! 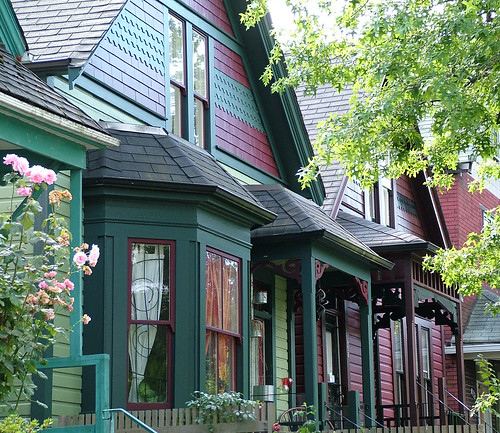