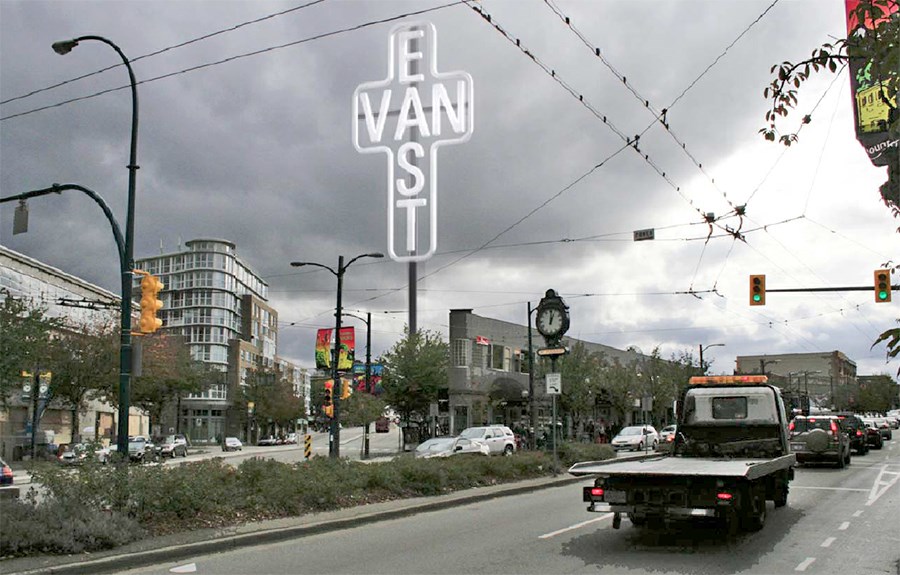 Installed in 2010 as part of the City of Vancouver's Olympic and Paralympic Public Art Program, Ken Lum's East Van Cross (or Monument For East Vancouver, as it is officially known), is a symbol that has defined the area east of Main for decades.

Born in East Van in 1956, Lum took his love for the neighbourhood he grew up in—and a sort of emblem seen scrawled on walls since the 1940s—and made it into a permanent beacon. It was erected at East 6th Ave and Clark Drive, facing West towards downtown, before the Olympics took place.

However, a little known fact is that the public sculpture was originally meant to be located on Main Street where it meets Kingsway, a block North of Broadway.

On the original blueprints dated December 5, 2008, put together by Graham Barron for Lum, a rendering shows where the artist had hoped it would be placed.

In an email to Vancouver Is Awesome, Lum notes that the siting of the Mapping and Marking project (which all the Olympics legacy art projects were funded under) was up to the artists. Meaning he could choose where he wanted it to be, granted it was public land.

He tells us that "Given the subject of East Vancouver, I inclined towards Main street as a kind of obvious divider of the city.  I noticed the median in the middle of Main street."

Unfortunately, the City told him "That was not possible," so he proposed that it go at the top of Kensington Park on Knight at 37th Ave. That also wasn't possible, because "Too many people objected," to it being put there.

He presented Commercial Drive near Broadway next, and was also met with opposition, so the tiny strip of land at 6th and Clark "turned out to the be perfect site."

In 2019 the application to build Nature's Path's headquarters on the adjacent property to the cross was approved, putting its future location in doubt.

For now it stays, but it just might end up near Main and Broadway one day.