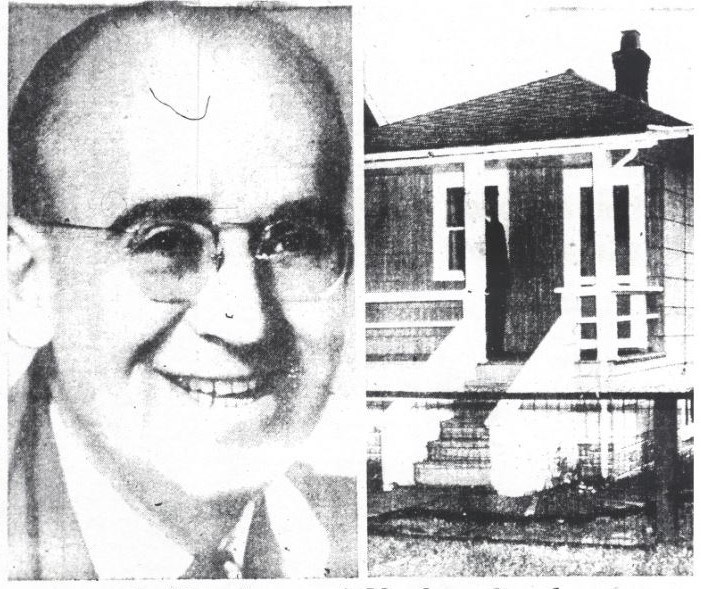 The last time anyone at the Vancouver News-Herald saw Bob Hopkins was when his shift ended just after midnight on Friday November 5, 1954. When Bob didn’t turn up for his Sunday shift his worried foreman and a co-worker called around to his Fleming Street home. They found the doors locked, the blinds drawn and two days of newspapers still on the front porch.

An officer found a ladder and climbed through an upstairs window. Even for a veteran police officer, the crime scene was horrific.

The 48-year-old printer lay face-up on the floor in his living room. An electric light cord was wrapped around his neck and his ankles were bound together with neckties. Bob had been tied up, tortured and then shot in the head with a .22 calibre gun. He’d been dead at least 36 hours.

The small house was in shambles. Drawers and cupboards had been ransacked and their contents were scattered everywhere. Furniture lay strewn about. The most obvious motive was robbery, especially when police were unable to find either a wallet or money in the house.

The problem with the robbery theory was that the extraordinarily brutal method of killing seemed extreme even for a robbery/home invasion, and police moved on to other theories.

Bob appeared to live a quiet life. Friends and neighbours described him as a mild, friendly man who kept to himself and spent long hours in his garden. On the face of it, it would be hard to imagine a more unlikely murder victim.

What his co-workers and neighbours didn’t know was that Bob was gay. He was straight at work and lived a secret life. He had to. In the 1950s homosexuality was illegal, there were few places to safely meet, and coming out would have meant losing his job, his place in the community and possibly his family. Homosexuality wouldn’t be decriminalized until 1969.

While the newspapers of the day avoided any outright references to homosexuality, the police investigation seemed to be heading in that direction. Police found Bob’s address book which included the contact details for casual male acquaintances he would arrange to meet after work and sometimes bring home.

Herald employees told police that Bob had been seen in the company of a dark-haired “mystery man” and that they had met several times in recent weeks. This man was unemployed and they said that Bob had loaned him money. One of the Herald staffers told police that he had given Bob and his friend a ride home to Bob’s house in the Kensington-Cedar Cottage area on a couple of different occasions.

The following month detectives had a suspect in custody who had been convicted of committing a similar crime. He was never charged though in Bob’s murder and it remains unsolved.

Eve Lazarus is a reporter and author, and she hosts and produces the Cold Case Canada true crime podcast. Her books include the BC bestsellers Murder by Milkshake; Blood, Sweat, and Fear; Cold Case Vancouver and Vancouver Exposed: Searching for the City’s Hidden History. She blogs at Every Place has a Story.