Geoff Huffman with homegrown goods in the backyard of Katy and Geoff Huffmans' heritage house in Hastings Sunrise. They have been planting trees and landscaping inspired by old photos of what was once on the site.
0
Mar 2, 2016 1:01 PM By: Vancouver Heritage Foundation 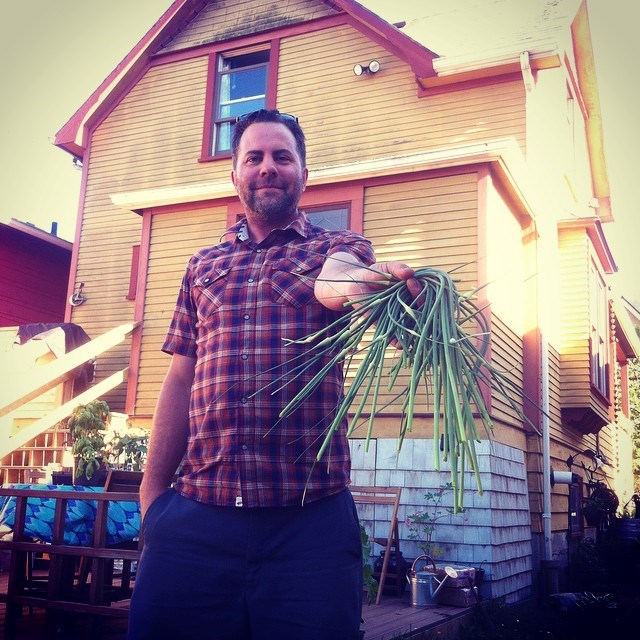 Geoff Huffman with homegrown goods in the backyard of Katy and Geoff Huffmans' heritage house in Hastings Sunrise. They have been planting trees and landscaping inspired by old photos of what was once on the site. They managed to get some grapevine cuttings in the neighbourhood to revive grape growing that once took place. Photo credit: Huffmans.

Ever been bitten by the history bug? One wonderful bonus of working on VHF's Heritage Site Finder Interactive Map is the connections we get to make with awesome Metro Vancouverites and newcomers. Our Heritage Site Finder interactive Map volunteers have ranged from the newly transplanted to long time residents, and even one who is researching for us from Vancouver Island. What impresses us most about the volunteers is the enthusiasm, love and genuine spark of joy that comes from interacting with and researching the little known history of Vancouver's heritage sites. We received an email from a lovely couple who have been living in a heritage home in Hastings Sunrise for the past 3 years who wanted to share with us the research they did on the house's history (the house is on the Vancouver Heritage Register and therefore on VHF's Heritage Site Finder Interactive Map). We are always delighted to receive house history to help complete the map, and felt it was time to highlight some of the stories we've learned about Vancouver's fascinating heritage sites.

"From the moment we purchased our home we have always intended to preserve and enhance the original charm and character. Because it has so many original features our motto has always been 'do it once, do it well, and make it look original!'" (Geoff Huffman).

Today's neighbourhood of Hastings Sunrise was part of the Hastings Townsite, an 1869 reserve of land by the provincial government which did not join the City of Vancouver until 1911. On a city map today, Hastings Townsite would extend south all the way from Burrard Inlet to 29th Avenue between Nanaimo Street and Boundary Road. The Huffman's house at 2617 Pandora Street is one of at least four structures built on three adjoining lots on the northwest corner of Pandora and Penticton Streets (formerly Clinton St) between 1908 and 1912 by Scotsman, William Michael McGavin, the local post-master and grocer. In 1908 he built a 2 storey corner store/butcher shop and post office with apartments above called 'Clinton Grocery'. William's brother was the owner of McGavin's bread, which you can still find today in local stores, and McGavin Bread Basket stores around Metro Vancouver. 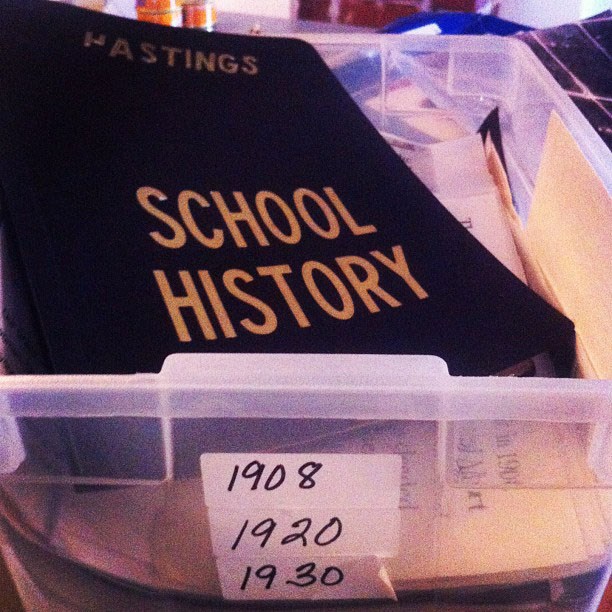 Hastings Elementary held its centennial in 2008 and Geoff investigated their archives. There were two photos of the school with glimpses of their house in the background from 1925 and 1935. Photo credit: Huffmans.

William McGavin spared no expense on this modest home: fir floors throughout, a wrap-around porch, 9' ceilings on the main floor and a kitchen covered from floor to ceiling in ornate tin, all of which still exists to this day. In 1916, McGavin sold all three lots and all the structures to the Atkins family, and the name of the store was changed to 'Atkins Grocery and Meat'. It was likely run as a boarding house at some point while the Atkins owned it till the 1950s. In his research, Geoff Huffman discovered the story of John James who as a child had lived in the house from 1935 to 1946. He and his twin brother worked at the store after school keeping the furnaces going by delivering wood and coal. Their father worked as a customs agent in Burrard Inlet, often picking up by rowboat, 'packages' that had been thrown overboard by ships. Geoff came by these stories after doing a google search for John James. Geoff spent the next 6 months chatting over the phone with John and corresponding by email before John passed away in 2014. The first thing John James asked when he called was "Does the kitchen still have all that beautiful tin?" 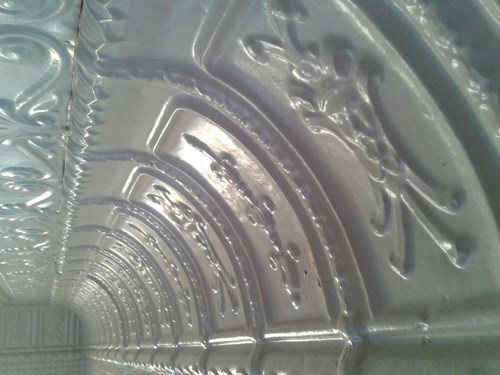 The glorious tin in the kitchen. Photo credit: Huffmans.

From the 1950s to 1990s, a German lady named Maria owned and ran the building as a boarding house, and locals say she taught piano and had lots of cats. It was boarded up and neglected until 1993 when the Borrowmans purchased it and began extensive renovations. The Borrowmans also saved over 20 lights from Hastings School across the street before it was seismically upgraded in 1997 and took many of them to Jacks' New and Used. Keen salvage collectors of historic materials and by sheer coincidence, Katy and Geoff Huffman bought a light from Jacks' New and Used for their kitchen that appears to be one of the originals from Hastings School! The Huffmans also have a stack of over 1500 bricks salvaged from the Pantages Theatre on Hastings Street which they plan to use to create garden pathways.

" We look forward to being the caretakers of this little gem in Hastings Sunrise and being part of the ongoing narrative" (Geoff Huffman).

Thank you to Katy and Geoff Huffman for sharing their story and photos, and for putting in the money, effort and time to maintain a heritage home. Hooray for the Huffmans and our Heritage Site Finder volunteers. VHF's Heritage Site Finder recently received an Award of Honour, for Education and Awareness at the 2016 Heritage BC Awards. If you'd like to be involved or have research to share with us, please contact jessica@vancouverheritagefoundation.org. We'd love to hear from you! 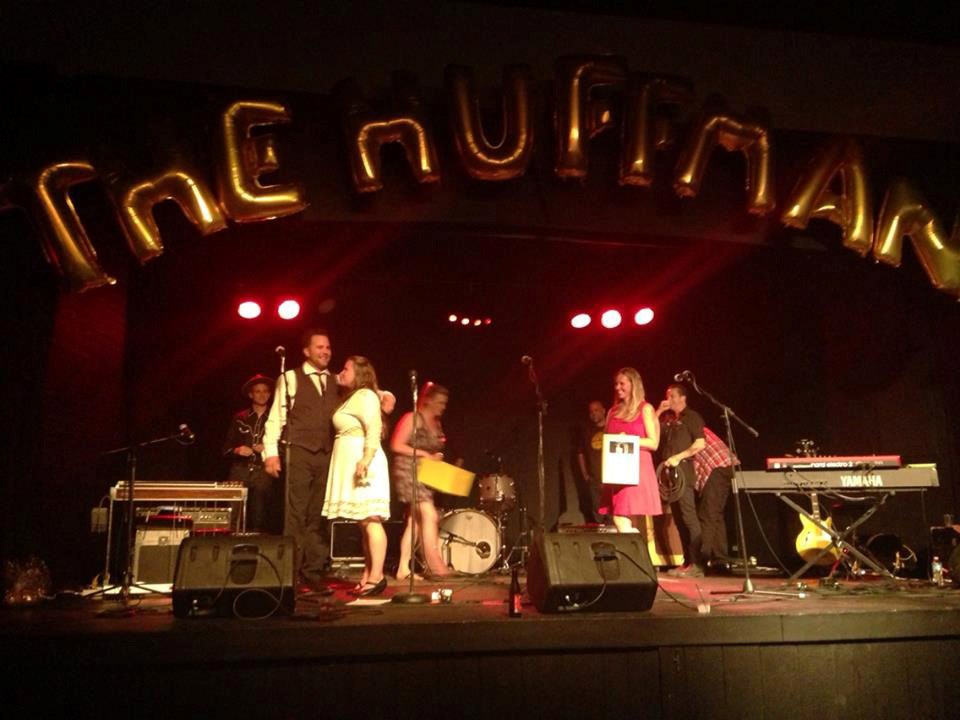 The Huffmans were married in their backyard in 2014 and they take an anniversary photo in front of the house every year. They held the wedding reception celebration at the WISE Hall. Photo Credit: Huffmans.