Though we're not involved with or tied to VANOC or any 2010 Olympic organizers or monies in any capacity whatsoever, we have always been pro-2010-Olympiad here at V.I.A.

Though we're not involved with or tied to VANOC or any 2010 Olympic organizers or monies in any capacity whatsoever, we have always been pro-2010-Olympiad here at V.I.A. because we see the value of what they bring to our city being larger than any single event ever in the history of this city. There's this commercial on CTV lately where a dude says "It's going to be like EXPO 86 on steroids!", and we couldn't agree with that statement more.

Of course there are very serious issues to do with them that need to be paid attention to, discussed and then addressed... but not here, as VancouverIsAwesome.com only tells one side of the story, and that is the good side. We are meant to be the place you go to after you've caught up on all of the real news, when you just need something to smile about. We are all about cute and cuddly mascots and cheering on our athletes and will continue to bring you this awesomeness throughout March.

Over the past couple of years we've made 51 posts that involve the 2010 Olympics, all with our trademarked 'positive spin' casting a rose coloured hue over them (you can view all 51 of them HERE). We applied for media accreditation months ago but were too late, unfortunately, so the only coverage you'll see here of the games themselves will be the sortof peripheral we've been giving you thus far; mostly stuff that we stumble across as curious residents of this city. Which is not to say we won't be trying to attend!

We've been combing Craigslist lately looking for bargains on tickets, and if you've been on there for the same reason it's likely that you're as sketched out as we are about the whole affair. With thousands of grainy photos of "tickets" on people's countertops (see below for a few) how are you supposed to know what's legit and what's totally fake? Well, today VANOC launched an online system where you can login and buy and sell tickets right off of their web site, making it easy for you to buy tickets that you know are for real, and maybe for less than ten times what they're worth like people seem to be doing on the old 'list. All of the info is HERE on their site.

VANOC has also launched a system where you can donate your tickets to local non-profit community groups. We are not one of these groups but if you work for one of those local businesses who has a stack of tickets to give away to accounts etc, we're asking for Olympic tickets for Christmas here at V.I.A.! 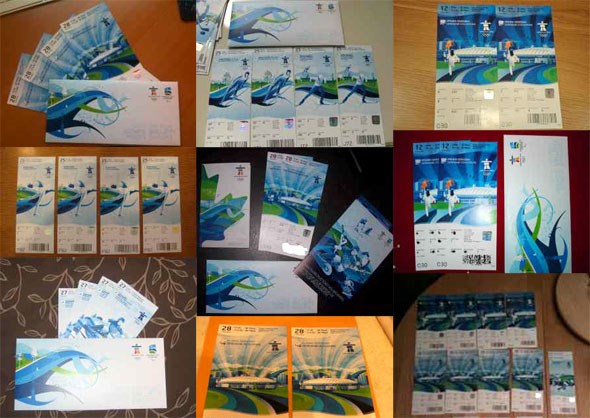