(Animated GIF above from a great resource on Expo '86 memories: Bobbea.com)

For B.C., and for Canada, it was the beginning of a major boost for industry, trade, and international tourism. For Vancouver, it marked the shift from an industry-based warehouse economy to a real-estate-based glass tower market.

Six views of False Creek from the 1960s to early 1980s, courtesy of the Vancouver Archives.

In terms of lasting effects, Expo '86 set the stage for saving the antiquated Roundhouse (which is now the base of a lovely community centre for Yaletown) and allowed the city the opportunity to take back the north False Creek portion of the waterfront for a pedestrian and cyclist seawall, to link Kitsilano all the way around to English Bay and Stanley Park.

It's a little tough to walk the old grounds and find much evidence of the fair today, but it happened. For one glorious summer, Vancouver, the dinky 'provincial' logging and mining finance city, had transformed an industrial waterfront wasteland into a splendid high-tech adventure-zone.

With a season’s pass in hand (bought well ahead of time, which made them cheaper), I was a child that spent a good deal of time that summer down at False Creek. 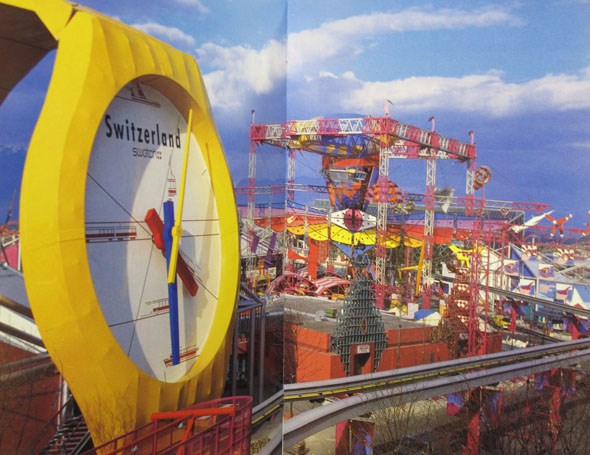 Expo ‘86 was 173 acres of bright Warhol-esque colours along the north and east banks of False Creek, from the Granville Street Bridge to Quebec Street and the limits of today’s Olympic athletes’ village. 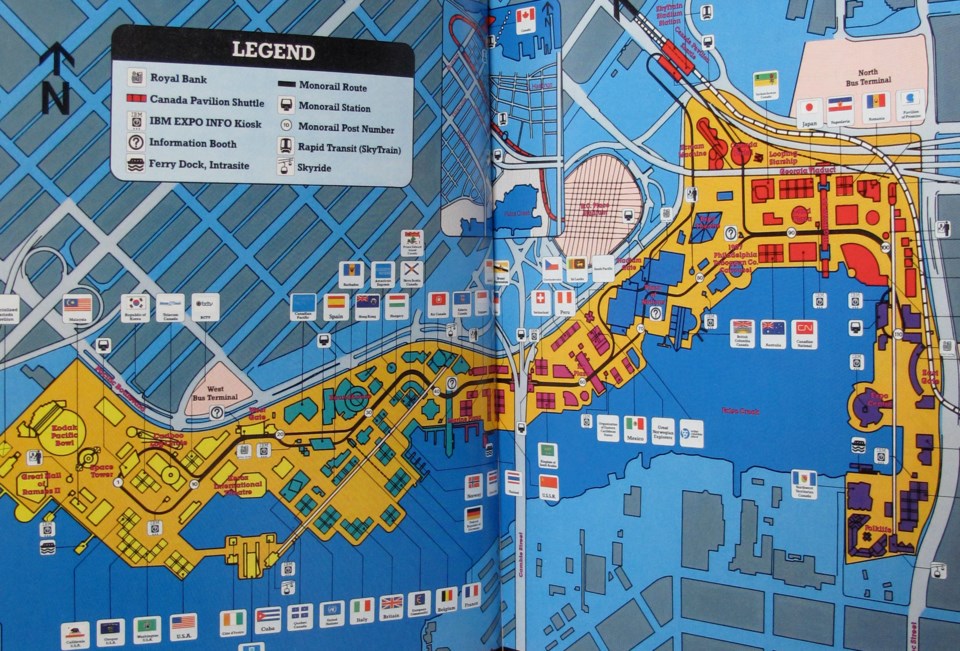 It was about pink, purple, green, yellow, blue, red: each ‘zone’ had one of these colours, a way to organize the landscape for finding things. Expo ‘86 was about transportation and communication. I knew that much. But my child’s mind remembers only the most flamboyant, interactive activities as the hallmarks of each zone.

The yellow zone, furthest west, had the entertainment for the younger set: the space tower drop ride, the cariboo log chute, the mummy (in the Great Hall of Ramses II), and the floating McDonalds barge or 'the McBarge', as we called it.

The next one over — the green zone — had the marine plaza with tall ships you could board. It also had pavilions for some of the Canadian provinces (the Alberta pavilion had styrofoam hockey pucks, one of which I absconded with); the giant Swatch, and the UFO H2O water park.

The pink zone was under the Cambie Street bridge and, in addition to the exotic international pavilions it contained, it was home to the children’s play area, which was a large net-enclosed ball room and habitrail for little humans.

The blue zone had the Plaza of Nations, which was special because of the little wooded area next to the water that was a nice, outdoor, shaded resting area. It also had the B.C. Pavilion (more recently, the Edgewater casino), which had weird elevator-pods (Trees of Discovery) that took you into tiny movie watching experiences about B.C. resources, or something. It was a weird pavilion, but also had a lot of salmon imagery, which was nice.

L to R: The Discovery Trees in the B.C. pavilion, one of many sculptures, the smallest pavilion.
(Photos from guide books and The Expo Celebration)

The blue zone was a bit more adult-oriented, but I seem to recall there was a floor that lit up, like in the Michael Jackson video; a restaurant where your table was inside the shell of a classic 1950s car; and a nightclub where fish swam under the glass floor.

There were some restaurants that were very California-cool inspired. But there was a lot of other architectural features (thanks Bruno!) that gave the place a very nouveau-space feel — so much so that it was used for sets and scenes for the 1988 Disney Sunday movie “Earth Star Voyager." 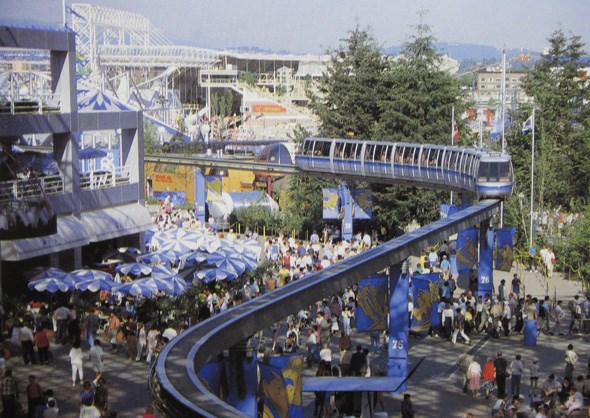 The Expo monorail in the Blue Zone. (Photo from The Expo Celebration)

The red zone was fairly boring, except for the scream machine, the looping starship, and the CN pavilion, which showed the film ‘Rainbow Wars,’ which I thought was brilliant for being multi-lingual by avoiding the use of spoken words.

The purple zone had the Expo ball (Expo Centre, Science World, Telus World of Science, etc.), which played cool movies — particularly the one called "Discovery" that starred Fairuza Balk (a.k.a. Dorothy in Return to Oz) and a red ball spaceship alien named Zargon that travelled all over B.C. and almost got hit by a train at one point while pouting (this was all very Flight-of-the-Navigator-esque). It was shown in the Omnimax theatre, if I recall correctly, and the surround-video made you feel immersed, as if you too were flying through B.C. valleys with Fairuza inside the red ball. I would love to see this film again, but unlike Rainbow Wars, I don't think it was ever released to school libraries.

In the 80 or so pavilions and in the brochures and guidebooks, everything was about selling tourism, selling raw industry, selling high-tech potential (like the IBM touch screen!)... and selling potential. My memory is that everything was billing itself as "innovative."

Adverstisements from the official Expo Visitor's Guidebook: IBM, Swatch, Coke.
Somewhere in the middle of the whole grounds there was Highway ‘86, a giant frozen wave of road covered in all types of conveyances: cars, motorcycles, boats, shoes. There were crazy sculptures everywhere, and futuristic solar-powered cars, and pedal-powered flying machines. There was a monorail, and people-ferries on the water to shuttle you around. 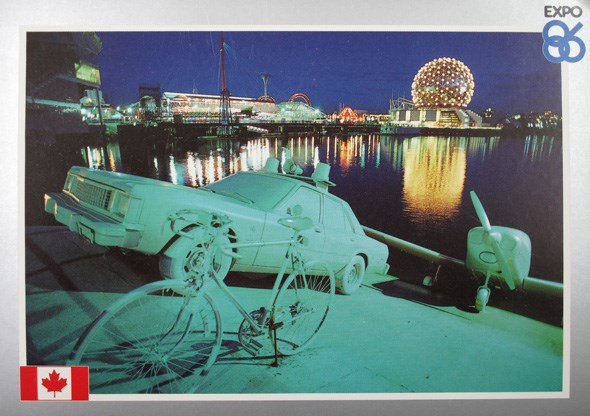 Top: A postcard showing Highway '86 and the Expo Centre. Below, L to R: BC Place in the distance, Highway '86 (top) and the Saskatchewan and Australian pavilions; the Yukon pavilion; the royals visit Expo in Vancouver.
(Photos from guide books and The Expo Celebration)

You could also take the new SkyTrain to connect to the Canada Place portion of the fair, where you could watch 3D Imax movies featuring robotic prosthetic limbs and The Canadarm.

The stars came out to peform or visit. Bill Cosby did one show at Expo. Princess Diana visited for the Opening Ceremony. Depeche Mode performed on stage. I didn't exactly see any of these shows — just Di, I think, but from quite a distance — but still, they were there. You could watch the fireworks every night of the fair from the Cambie Street Bridge, and many nights I did.

What was fun for me then was running around with a little Expo passport collecting stamps from the different countries and attractions. 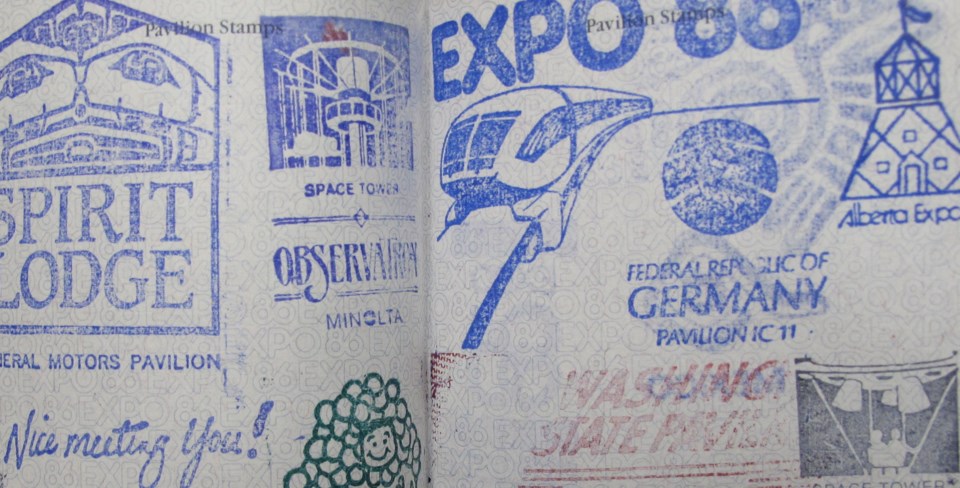 But it's the physical objects that really trigger remembrance: What's fun for me these days is when I come across leftovers from the fair in unexpected places: the McBarge in Burrard Inlet; a pavilion, off the Fraser River at New Westminster; or a space-shuttle food vending station near Boston Bar.