A new poll found only 55 per cent of Canadians are wearing masks regularly when they leave home
Jul 18, 2020 6:32 PM By: Jake Kivanç, The Canadian Press 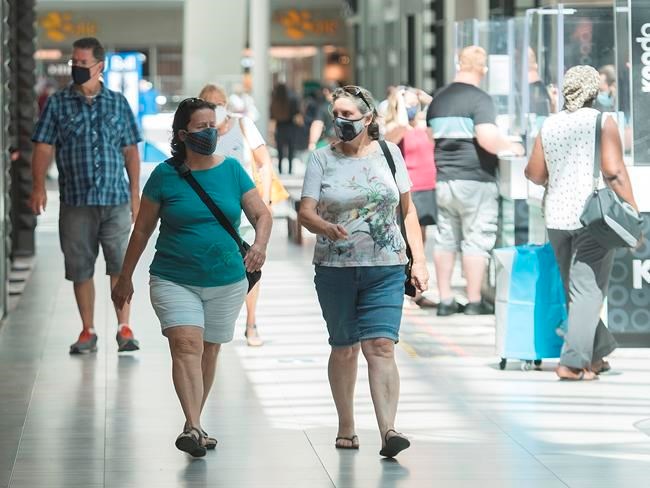 People wear face masks as they walk through a shopping mall in Montreal, Saturday, July 18, 2020, as the COVID-19 pandemic continues in Canada and around the world. GRAHAM HUGHES / THE CANADIAN PRESS

TORONTO — As fears of a resurgence in COVID-19 cases increase, many Canadians are reluctantly donning masks to stop the spread of the virus.

This is according to a new Angus Reid poll which found only 55 per cent of Canadians are wearing masks regularly when they leave home.

The other 45 per cent either wear masks rarely or not at all.

Only a quarter respondents said their reason for not wearing a mask was that they forgot to bring one, while 74 per cent pointed to discomfort, lack of concern about catching COVID-19, a perceived ineffectiveness of masks, or simply mimicking others not wearing them.

The poll also found that men were much less likely to wear masks than women, and a majority of women across all age brackets reported wearing one when they leave home.

This is despite the poll's finding that national concern over the threat posed by COVID-19 is at its highest since April.

Alberta Premier Jason Kenney addressed the reluctance of some Albertans to wear a mask at a press briefing in Red Deer today, noting the potential for further economic damage if the province needs to go into lockdown again.

"I hear people say that mask wearing is a globalist idea. I will remind them that I was advocating mask use when the World Health Organization — a global organization — was recommending against it," Kenney said.

"My pitch to those folks, if they're upset about mask usage, the alternative will inevitably be more widespread suspensions of economic activity if we get a second outbreak."

A different poll on COVID-19 from Leger and the Association of Canadian Studies found a nearly 10 per cent increase in support for masking between June 26 and July 12.

Across the country, the Leger poll found 67 per cent of Canadians support mandatory masking for all indoor public spaces, compared to 58 per cent just over two weeks ago.

On Saturday, Quebec became the first province to mandate masks inside public spaces across the region.

Similar orders had already been issued on the municipal level in various cities across Ontario, with Toronto enacting the order on July 7.

And as the city prepares to enter the Stage 3 reopening phase, the Ontario Medical Association has asked the provincial government to keep indoor bars closed, saying it presents "significant risk" for potential outbreaks.

A number of incidents in Toronto have highlighted the divide over masking and physical distancing rules, with some bar and restaurant owners bending public health bylaws in order to serve more customers or run illegal parties.

Earlier this week, the Alcohol and Gaming Commission of Ontario announced an investigation into popular King St. restaurant MARBL due to a video that emerged on social in which dozens of patrons could be seen crammed into a semi-indoor space while celebrating a birthday.

At the beginning of July, another King St. bar — Goldie — lost its liquor license after it was revealed the establishment hosted a club night for 125 people last month.

This report by The Canadian Press was first published July 18, 2020.