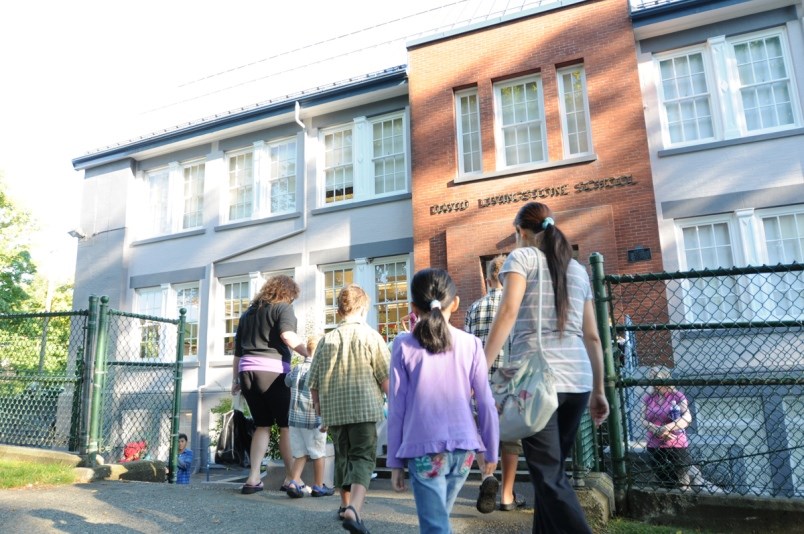 The Vancouver school board will discuss a motion at Monday night’s meeting that could see the police’s school liaison program suspended until a review is completed on the program. File photo Dan Toulgoet
Three Vancouver trustees have drafted a motion that calls for the suspension of the school liaison officer program operated by the Vancouver Police Department and another that RCMP officers run in three schools in the University Endowment Lands.

The suspension would be necessary so a review can be done of the programs and wider issue of police participation at school events and activities, according to the motion, which will be debated Monday night.

Janet Fraser, the board’s chairperson and one of the trustees behind the motion, said the call for a review is being driven mainly by some students who don’t feel safe in schools when officers are present.

“There’s been a lot of discussion around police officers in uniform in schools and the mere presence is difficult for some students,” she told Glacier Media Monday in advance of the board meeting.

“Yet, at the same time, we’re hearing the presence of police officers in schools creates a safer environment for all the children and youth who are victims of crime. It’s going to be an interesting discussion to see how we fit all those pieces together.”

The current global spotlight on policing issues, which spread to Vancouver in the form of demonstrations and “defund police” email campaigns to city councillors, is also a factor in the need for a review, said Fraser, who drafted the motion with trustees Barb Parrott and Lois Chan-Pedley.

The tide of anti-police sentiment has been fuelled by the death last month of George Floyd of Minneapolis at the hands of police and the recent police shootings and violent arrests of Indigenous peoples in Canada.

“Given the time we’re in, and thinking about reconciliation and anti-racism and the spotlight on those issues at the moment, we felt it was a good time for this discussion to be had by the board about the role of police officers in our schools,” Fraser said.

That could prove to be a challenge with growing support to scrap the liaison programs, with an online petition calling for “the end of policing in Vancouver schools.”

The petition had garnered more than 2,400 signatures as of Monday from people identifying themselves as students, teachers, educational assistants and others, including Harsha Walia of the B.C. Civil Liberties Association.

“As parents, educators and community members, we want schools to be places where all children and youth feel welcome, safe and valued,” the petition said.

“We want to believe that this is already the case, but many Black, Indigenous and racialized students and their families do not feel safe at schools where police are present.”

“As an African-Canadian teen I have a great fear of the police, as many Black and Indigenous youth do,” Baboth wrote in her presentation.

“I have no trust in police to keep me safe when I felt unsafe at Lord Byng.”

The trustees’ motion comes as the Vancouver Elementary School Teachers’ Association passed a similar motion June 16. It reads that “no VPD or RCMP officers be invited to school events and that members no longer plan or attend events where VPD or RCMP officers are invited, until both organizations take clear steps to address the disproportionate repression of Black, Indigenous and people of colour.”

Jill Barclay, the teachers’ association president, told Glacier Media Monday via email that she wasn’t doing media interviews at this time. But Barclay said in her email the purpose of the motion was to generate discussion about the issue at schools with teachers, staff and community.

“Individual schools will be making decisions as to how to proceed in the future,” she said.

“These conversations are difficult and are part of the movement that we see in the wider community about how to affect systemic change within organizations.”

Barclay emphasized the teachers’ association’s motion does not “direct the Vancouver school board in any way, although we would hope that they too could have these discussions at the board level.”

Fraser said the motion that she and two other trustees drafted was not influenced by the teachers’ association’s motion, saying they were done in parallel. Regardless, the board sets policy in the schools.

Const. Tania Visintin, a VPD media relations officer, said the department would not comment directly on the motions. But Visintin said school liaison officers play “a huge role” in elementary and high schools.

“Much of what our [liaison officers] do daily is engage with the students and make the schools a safe and inclusive place for them to learn,” she said in an email.

“While we certainly do investigations, our focus is on public safety and student/staff engagement. School administration are typically in contact with the [officer] and will reach out if they have concerns with something happening in the school.”

All schools in Vancouver have an officer assigned to them, although that officer is typically responsible for several schools. The position is seen as a conduit for students to connect to other programs and activities operated by the VPD, including cadet programs, a youth police academy and sports camps.

The school board does not fund the school liaison program, which was first established in 1972 at Killarney secondary school before being implemented district-wide.