Here's why 13 women will do the Grouse Grind in gowns

The event is the brainchild of North Vancouver resident Karen Stark, who works in the sports and clothing industry and has a penchant for contributing to – and organizing – worthwhile causes.
0
Sep 19, 2018 7:31 AM By: Ben Bengtson

Anyone who has ever braved the Grouse Grind is likely no stranger to witnessing people attempt the 2.9-kilometre long, 853-metre high hike wearing all manner of ill-suited clothing options.

Have you ever seen someone attempt it wearing a ball gown? 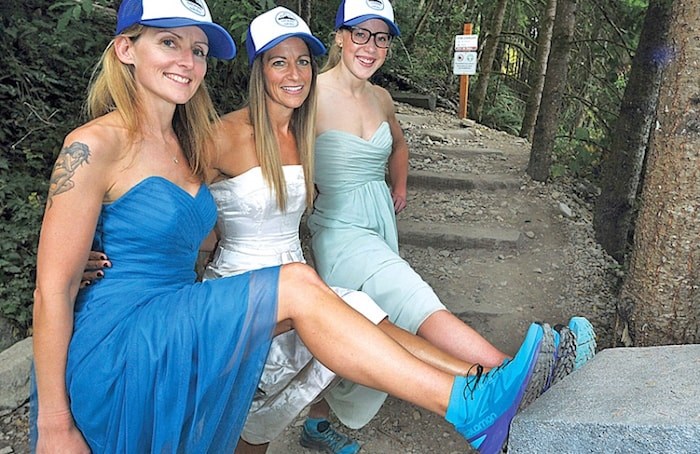 Event organizer Karen Stark,Tiffany Phillips and Jeanelle Hazlett will be taking part in the inaugural Gowns on the Grind event on Sept. 29 in order to raise money for the not-for-profit organization KidSport. (Paul McGrath/North Shore News)

That’s what a group of 13 women will be wearing when they climb the Grind on Sept. 29 for the inaugural Gowns on the Grind fundraiser.

The event is the brainchild of North Vancouver resident Karen Stark, who works in the sports and clothing industry and has a penchant for contributing to – and organizing – worthwhile causes.

“I had this idea two years ago and kind of kept putting it off,” due to the constant juggling act of life, raising kids and work, says Stark.

After she organized a fundraiser last year for those affected by the bout of B.C. wildfires – a fundraiser that she was compelled to get back up and running again this summer as well – she had the momentum to return to her Gowns on the Grind idea.

Stark tapped some longtime friends in her life for the event which will see them adorn gowns and conquer the Grind in an untimed, zero-pressure setting.

While Stark isn’t looking for outside participants, the gown-Grinders will have a videographer and photographer on hand when they take off on the 29th.

They’re not doing the event just to show off high fashion and experience the great outdoors, either.

The spectacle is a fundraiser for KidSport, notes Stark, a not-for-profit organization that provides financial assistance for kids who want to play sports but might not be able to otherwise.

Stark has been hustling to get companies to donate $1,000 to “support” each hiker, with every participant slated to wear a sash across their gown emblazoned with the sponsoring company’s name. All the money will go towards supporting KidSport on the North Shore.

“I just think it’s such a fantastic organization that does a lot to help families in North Van where it’s so expensive and we’re not all fortunate enough to be able to put our kids in all sorts of activities,” she says.

Stark had the idea years ago when reflecting on how much of an impact the Grouse Grind, and physical activity in general, has had on her life.

“I have three kids who are seven, nine and 12. I’ve spent many, many days on the Grind with my kids on my back taking them up when they were all little. I wanted to do something with that,” according to Stark.

And the gowns part of the idea? That was simple: “The ball gowns was just because I thought, you know, if you’re going to do it and you want to raise money you’ve got to be a little bit extreme and make it unique.”

Stark has created an Instagram account called @gownsongrind that can be followed for up-to-date information on the event, including profiles on each hiker.

If the event is a success, she is hoping to be able to run it again next year, she notes.

She notes that while the ladies will be braving the Grind wearing gowns, they’re all set when it comes to footwear.

“Salomon was very generous and donated runners for everybody.”