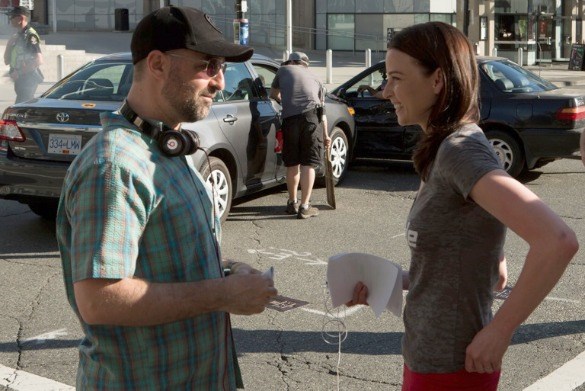 Who is the central character of the Continuum saga? When we last left Vancouver-cop-from-the-future Kiera Cameron (Rachel Nichols) in present-day, she had been betrayed by young tech genius Alec Sadler (Erik Knudsen) who’d taken the time travel device that she’d hoped would return her to her family in 2077.  And to add insult to injury, Kiera had been captured by time-travelling Freelancers, who protect history’s timeline. And tonight she must make a deal with those Freelancers to stop Alec from altering history as he travels back in time one week to try to save his girlfriend "Emily" (Magda Apanowicz) from death. As Showcase trailers and teasers have revealed, the latest time travel twist will be "two Alecs in love with the same girl" in the same timeline or the most "awkward love triangle" ever, laughs Knudsen. Will Emily be saved? What deal does Kiera make with the Freelancers? Will Kiera have to kill one Alec to get home? Wait, whaaat? Tune into tonight for all the Continuum time travel twists at 9 p.m. (ET/PT) on Showcase.

Continuum showrunner Simon Barry won't choose between Kiera Cameron and Alec Sadler as his central character. Kiera is "the catalyst" for Continuum because "she was not supposed to be part of this journey," he explains. And the "randomness" of her being swept up in terrorist group Liber8's escape into the past is what drives the narrative. But Alec Sadler is important to Continuum too and that's why we met both the young tech genius (Knudsen) in present-day Vancouver  and the aged head of mega-corp SadTech (William B. Davis) in 2077 in the series premiere. "The same person in different timelines," Barry explains.

Will young Alec change his destiny? Maybe not. At some point in season three at least one Alec and Kellog (Stephen Lobo) are back making the big bucks, although there have been no party scenes on the yacht so far, they said ruefully. Knudsen is grateful for his big break on the show, noting that initially his role was a "small part as the tech/IT guy but it grew more and more." As a fan favourite, Knudsen gets a lot of attention from sci-fans who "criticize loopholes in the scripts" and sometimes give him "acting advice and tips", which made Lobo laugh in disbelief when he heard.

"Continuum is about Alec Sadler," agrees Victor Webster, who plays Kiera Cameron's present-day Vancouver police detective partner Carlos Fonnegra. "It's Alec's story. Finding out who the real Alec Sadler is, is what Continuum's about." But Webster concedes he could be wrong and that's the "cool thing about the show". Meanwhile, the world of his character Carlos has been rocked and rocked hard in the last two seasons. When we last left the disillusioned detective, he had walked out of the police station and driven to the farm to shake hands with the future terrorist Theseus (Richard Harmon).

How did Carlos get to this dark place? "Carlos is the moral compass of the show....the most straight-forward," Webster declares, but finding out that his partner Kiera is from the future was too much information to handle. And things get worse in season three. There are "new bends in the road and [Carlos] is starting to lose it." There's a "big old strain on his relationship" with Kiera, something I noticed in the scenes when Continuum filmed at the Marine Building downtown in December and on my set visit to Andy Livingstone Park in late February. Webster can't explain more without giving away plot but "something is fishy" and since Carlos "works with facts, he's collecting information like in a case".

And tonight is just the beginning. What's in store for us at the end of season three's thirteen episodes? "A crazy crazy twist...double crazy" teases Erik Knudsen about the season three finale. "Simon Barry loves surprising the audience," says Ryan Robbins, who plays a mysterious John Doe character in the final episodes. "It's very very clever. At least a double twist." Let the season three ride begin.