Photo Melissa Shaw A group of youth that have aged out of foster care are advocating for barrier-free funding from the B.C. government that extends from age 19 to age 25.
Melissa Shaw Jul 16, 2018 5:00 PM 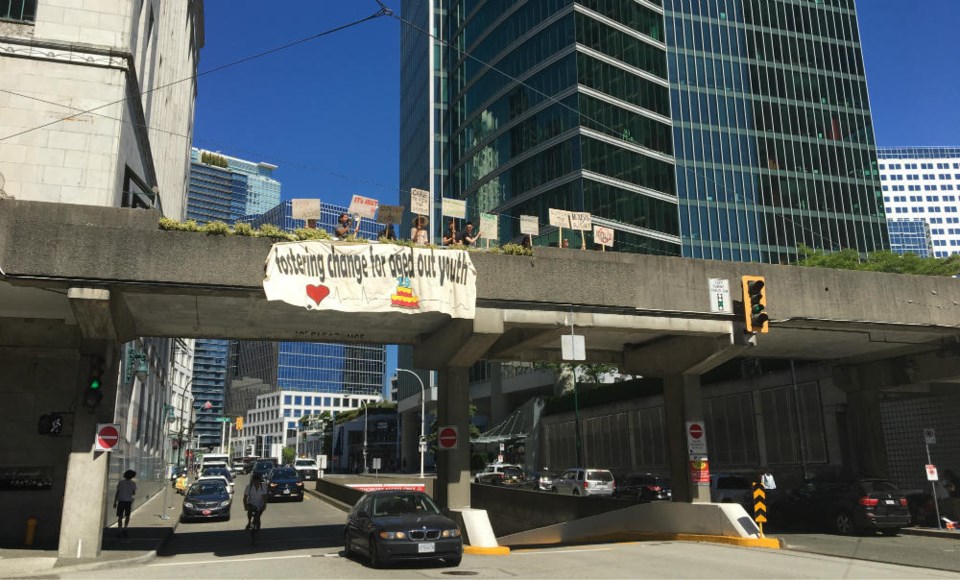 A group of youth that have aged out of foster care are advocating for barrier-free funding from the B.C. government that extends from age 19 to age 25.

Community organizers with Fostering Change unveiled a banner over the pedestrian overpass at Cordova Street and Granville Street in Vancouver earlier today. Youth held signs that read 'imagine losing it all on your 19 birthday' and 'care to fix the system.'

Fostering Change Community Organizers drop a banner at the Granville and Cordova pedestrian overpass calling for more support for youth that have aged out of care. pic.twitter.com/1zGWKSDfpu

Organizers say only 13 per cent of youth that have aged out of care access the Agreements with Young Adults (AYA) program, which provides financial support from the government for youth from age 19 until their 27th birthday for postsecondary education or an approved life skills program.

Keeshana Emmanuel was born in Surrey to a Nigerian immigrant father and went back and forth between living with him and being in care. Emmanuel says she found a family that wanted to adopt her at age 14 but to be eligible for the AYA program she would have to be in care until her 19th birthday.

Her potential adoptive family did not have a lot of money to pay for school and she stayed in care until she aged out. "It doesn't matter how long you've been in care or if you were adopted at 18. You should still get access to that funding because you spent time in care and you've been through a traumatic experience."

Organizer Dylan Cohen says AYAs help the former youth in care that are already doing well but don't support the ones that are struggling.

Cohen grew up in care in Manitoba and says he had a "typical" experience where he spent time in many foster homes, attended three different high schools and experienced homelessness.

He was able to access funding support to get his postsecondary degree but says most youth aren't ready for postsecondary at age 19 or 21 because they are dealing with the trauma of growing up in the system.

About 51 per cent of youth in care graduate from high school compared to 89 per cent of the other students, according to the province's children's representative Bernard Richard.

Research gathered by the Vancouver Foundation reveals that 55 per cent of B.C. parents with children aged 19 to 28 have at least one child still living at home and 92 per cent provide their kids with a range of financial, social network and emotional supports.

Over 50 per cent of youth in care will apply for income assistance six months after aging out of care because they don't have parental support.

"What we're asking for is justice to bring us in equity with our peers in terms of opportunity and universal supports that don't require us to be attending a certain program or to have a certain legal status to be eligible," says Cohen.

The research finds that 76 per cent of British Columbians believe that the cut-off for youth in care receiving financial assistance should be extended past age 19.

Fostering Change has an online petition calling on the B.C. government to develop a comprehensive action plan to support former youth in care until age 25 through the AYA program and eliminate all eligibility criteria.

"The petition is the public's opportunity to say 'I care about youth in care' and I'm going to address the current policy situation by telling the government what we need to do," says Cohen.

Fostering Change is an initiative of First Call: BC Child and Youth Advocacy Coalition and was started by the Vancouver Foundation.

In an emailed statement, the MCFD says it has seen steady growth in the AYA program by adding an extra year of eligibility, allowing for year-round funding instead of just covering the school year and increasing the needs-based monthly support rate from $250 to a maximum of $1,250 but understands that it's not enough.

"Ministry staff are consulting with youth in care and youth-serving agencies with an eye to what further enhancements can be made to ensure the youth in our care are prepared, and properly supported to thrive in adulthood," the statement reads.