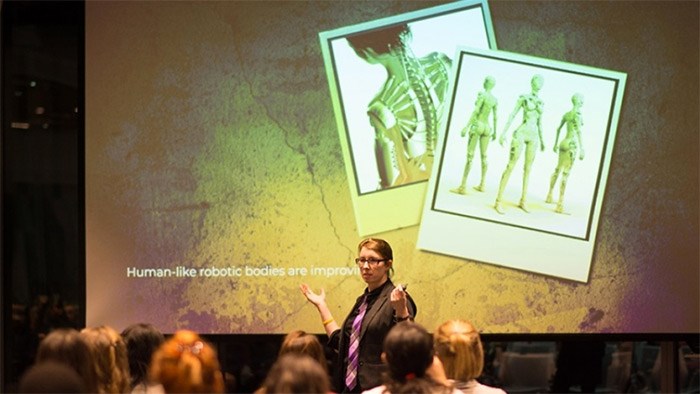 With Vancouver’s burgeoning artificial intelligence (AI) industry beginning to take on a life of its own, more female engineers are finding a place at the technology table.

“I think [AI is] a good field for anyone,” Gildert said after a Leaders in Robotics and Data Science event held at Microsoft Garage on January 25. “I think women bring a lot of interdisciplinary thinking to it as well. In AI, you’re trying to create something that’s like a mind, so it’s not just about solving a particular mathematical problem. You have to think about things like the esthetics of how a robot might look, how it will be received, and how we will get this out into the business world.”

Gildert, who co-founded Kindred, was one of five female panellists speaking at the event, which marked the first anniversary of the Vancouver chapter of Women Who Code, a global non-profit organization supporting women in technology.

About 170 people, mostly women in their 20s and 30s working in technology, attended the event. Most of the discussion focused on how to build human-like robots through a fusion of technology and art.

“We basically want to create a nice version of Westworld,” said Gildert, who estimates human-like robots will be commercially popular within 10 to 15 years.

Building robots similar to people involves creating a human-like body and brain, and instilling values and motivations, according to the 2017 Business in Vancouver Forty under 40 Award winner. Companies have already been making robots with human features, and the technology is steadily improving.

“We’re able to create better and better robots every year,” said Gildert, who holds a PhD in experimental physics from the University of Birmingham.

Gildert asserted she is an “optimist” about the potential effect of technological advancement on the future of humanity and human resources.

“I think a lot of the concerns are a little overhyped because Hollywood movies have really scared people, but I think some of them are valid like the weaponizing of AI,” Gildert said when asked a question about the potential for robots to take over civilization. “We want AI to work with humans.”

While the issue of jobs potentially disappearing is “controversial,” society as a whole needs to come up with ways to help workers displaced by automation and industry changes, Gildert said.

“I don’t think AI should take the blame,” she said. “I think it’s going to happen anyway.”

“The long-term goal is to build robots that are both useful and nice to interact with,” Lim said. “We’re still at the beginning stages. We’re trying to collaborate with local companies as well.”

She said social intelligence, including gestures and body language, is an important part of AI due to our society’s heavy reliance on technology.

“We’re doing a lot of interacting with screens,” explained Lim, who earned a PhD in informatics and computer science at Kyoto University. “We’re texting and emoting with our fingertips. We need to pull technology closer to how we interact as humans instead of having to adapt ourselves to the existing technology.”

Women Who Code Vancouver has grown to 1,521 members in the past year and continues to add new people.

“We have fostered a new image of what an engineer looks like,” said Holly Peck, Women Who Code Vancouver founder, Sanctuary AI research scientist and event MC.