Have your say on City of Vancouver plan for Broadway corridor

Height, density and how much strata versus rental is allowed will likely be among top issues debated during the Broadway planning process, according to chief planner Gil Kelley.
Naoibh O’Connor Mar 7, 2019 1:20 PM

Height, density and how much strata versus rental is allowed will likely be among top issues debated during the Broadway planning process, according to chief planner Gil Kelley.

But beyond those issues, he said the process is an opportunity to talk about the public realm and how to make Broadway “a more interesting and pleasant street,” as well as how to connect it better with the neighbourhoods it traverses.

Kelley made those remarks at a press conference about the launch of the Broadway Plan, which will take two years to complete, in advance of open houses that begin March 7. 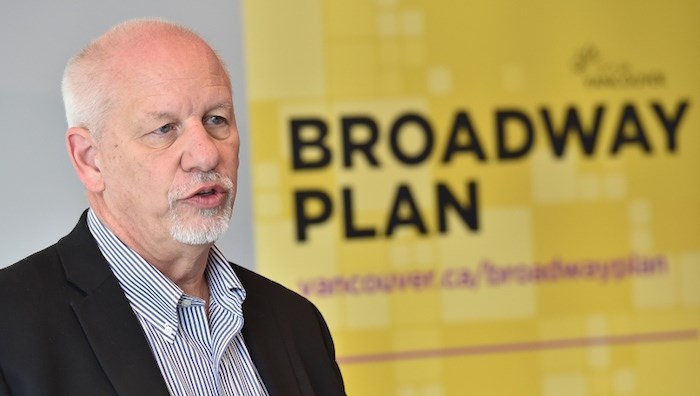 The 30-year plan will cover the Broadway corridor from Clark Drive to Vine Street between West First and 16th avenues, cutting through four neighbourhoods — False Creek Flats, Fairview, Mount Pleasant and a corner of Kitsilano. It will address subjects including housing, job space, and social and cultural amenities around the future subway route — an extension of the Millennium Line from VCC-Clark Station to Arbutus Street. Six stations are planned.

Kelley insists the city has no preconceptions about what will be the outcome of the Broadway Plan, but a big part of the conversation will be about protecting existing affordable rental stock, while adding more, and creating job space — the Broadway corridor from Clark to Arbutus has the second-largest concentration of jobs in the province after downtown Vancouver.

Concern about how the plan might affect land values is among issues that have been contemplated.

In June of 2018, council adopted an anti-speculation measure for the Broadway corridor — the Development Contribution Expectation (DCE) — to limit price escalation. The DCE outlines the dollar per square foot, which would come back to the city for community benefits, out of any new strata development that’s above what’s permitted by existing zoning.

“It doesn’t halt any transactions that might occur privately but we have seen, by observing market activity, that it has had a dampening effect on the price escalation of the land…” Kelley said.

The Broadway Plan also takes the opposite approach to what happened when the Canada Line was built.

In the latter case, land use planning took place after the Canada Line was constructed, while in this process it’s being done alongside the engineering for the Broadway subway and prior to its construction.

City staff have already brought Cambie business people together with Broadway business people so they can share what they experienced and learned during Canada Line construction.

Kelley also noted that the Cambie plan only dealt with a narrow strip on either side of Cambie, with fairly uniform zoning along it, while the Broadway Plan will address a much wider area between First and 16th avenues.

“By taking an earlier and broader look here, in the Broadway planning process, we can have a lot more variety and a lot more space to plan, to step development down, to get a mix of uses in and to think more holistically,” he said.

Jerry Dobrovolny, the city’s general manager of engineering, calls the Broadway subway project a significant addition to the regional transportation network and the single-most important investment that’s being made in the region.

“When we’re looking at how we accommodate growth, and the tremendous economic potential in this centre, the only way we can move those volumes of people is by investing in major transportation projects like this,” he said.

Preparation for the subway has already started with the relocation of trolley wires and trolley poles so buses can be re-routed during construction, which will involve tunneling along Broadway and some surface construction at the stations. Full-scale construction of the subway is expected to begin in 2020 and be complete by 2025.

An interim rezoning policy is in place for the duration of the two-year planning process. The city will only proceed with applications that were already in the pipeline for consideration. Any projects that could be considered beyond those proposals would be ones involving 100 per cent social or supportive housing.

Projects already in the pipeline include Jameson Development Corp.’s controversial proposal for a 28-storey tower at Broadway and Birch. The developer had received approval for a 16-storey building but then submitted an expression of interest for a higher building under the city’s Moderate Income Rental Housing Pilot Program aimed at creating rental units for households earning between $30,000 and $80,000 annually. Under that policy, a minimum of 20 per cent of the units would be secured for that income range.

Aside from that project, city staff said there are about 10 other projects that can be considered under the interim policy. They include proposals for other rental buildings, as well as a few office and hotel projects.

What will be allowed once the Broadway Plan is completed remains to be seen, but Kelley said what’s permitted may differ from area to area.

“We acknowledge that there is new transit coming, which is generally a good thing, but that there is also a series of very distinct neighbourhoods along this [corridor], and we don’t start out assuming they should all be the same,” he said.

“…We need to acknowledge that Mount Pleasant and Kitsilano and Fairview are very distinct areas, and [so are] the Flats. They may call for a different mix of uses, a different height profile. Probably, in all of those, there will be a high interest [about to what] extent we accommodate new floor space in any of those areas, priority for rental on the housing side, and priority for job space — that’s what we’re hearing from council and neighbourhoods so far. I imagine those themes will play out in the process, but there’s not, in our minds, [an idea] that it ought to be uniform zoning through that whole district, for the whole length.”

When asked about whether the province might pressure the city to ensure enough density is created to justify the investment in transit, Kelley said the city has told TransLink and the province it’s not funding the subway through increased development charges that would come from high density.

“Whatever density that occurs along here would help with employment, with rental options, and with some share of community amenities,” he said. “We've been pushing back and have held the line so far. It doesn’t mean that pressure won’t resurrect itself in the future but we think we have a good agreement at this point.”

Dobrovolny added that, from a transportation perspective, the density needed to justify transit investment already exists.

“Whether there is more density than that, is what the process will determine, but I want to be very clear about where we are at the baseline — we’re already there. We’ve got huge demand for transit,” he said.

To those worried about the prospect of towers being built down the length of Broadway, Kelley encourages them to participate in the planning process. He, again, stressed heights have not been determined, while pointing out that existing zoning, depending where you are, already allows multiple storeys and, in most cases, beyond what’s built.

“To the extent that we add more is a central part of that community consultation… What we can say is there is no predetermination about what the heights will be and, I imagine, they will vary from area to area and from station node to in between station nodes. Come help us shape the future of the corridor is my message now.”

CityLab at 511 Broadway at Cambie: