Residents are urging council to focus on slowing and reducing traffic along Prior Street, which runs east from Gore Street to Raymur Avenue, where it becomes Venables Street. 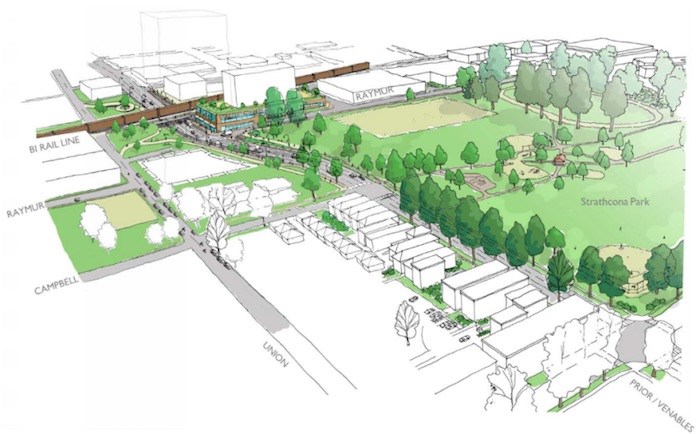 A city staff proposal recommends city council approve a vehicle underpass be built across Prior Street to avoid an increase in train traffic in the neighbourhood. Image courtesy City of Vancouver

Strathcona residents’ years-long push to have a vehicle-heavy road in their community calmed from traffic is driving their opposition to a city staff proposal that calls for the route to remain an arterial.

Residents turned up at city hall Tuesday to urge council to focus on slowing and reducing traffic along Prior Street, which runs east from Gore Street to Raymur Avenue, where it becomes Venables Street.

Penny Crawford, a director of the Strathcona Residents’ Association, said Prior was designed for residential use. She noted previous councils committed four times to calm the street, which connects to the Georgia and Dunsmuir viaducts.

“It’s time to make Prior-Venables safe for everyone,” Crawford told council. “We deserve meaningful action that permanently and immediately calms Prior.”

Her neighbours joined her in complaining about pollution, soot-covered houses and a freeway-like atmosphere where they say vehicles roar by narrow sidewalks used by seniors and young dog-walking families, many on their way to Strathcona Park.

Marie Willcock, who lives with her family on Hawks Avenue, referred to a city engineering presentation in 2013 that was made to the council of the day. The presentation concerned removal of the viaducts and exploring an alternative arterial route to Prior-Venables.

“And the first slide that they had up to council said: ‘In every city’s evolution, there are opportunities to correct a past planning wrong and to advance the city’s goals and livability,’” she said, referring to the construction of the viaducts in the 1970s and connecting them to Prior-Venables.

“It appears they’ve departed from that sentiment a little bit since then. I’m asking you to return to it today. The viaducts, and with them the use of Prior as a defacto arterial, have divided our community, they’ve separated us from our park, community gardens and they’ve made it unsafe.”

Staff’s proposal, which includes building an elevated train bridge over the section of Prior-Venables near La Casa Gelato on Glen Drive, is in response to an increase in train traffic running along an existing street-level track to the Port of Vancouver.

The train bridge would in effect create an underpass for vehicle traffic. It would be built to accommodate pedestrians and cyclists, who would temporarily divert from the rail-crossing stretch of the popular Union-Adanac bikeway before joining the route on the other side of the tracks.

The staff report noted there have been incidents where pedestrians and cyclists frustrated from the frequent train crossings in Strathcona have climbed through train cars to get to the other side of a street.

Motorists are also making U-turns and “short-cutting” through the neighbourhood. On an average day, the report said, 13 trains cross Prior-Venables and each crossing takes approximately seven to eight minutes.

The primary driver for the train bridge is the anticipation that freight rail activity will further increase on the Burrard Inlet rail line running between the Port of Vancouver and the False Creek Flats railyards. 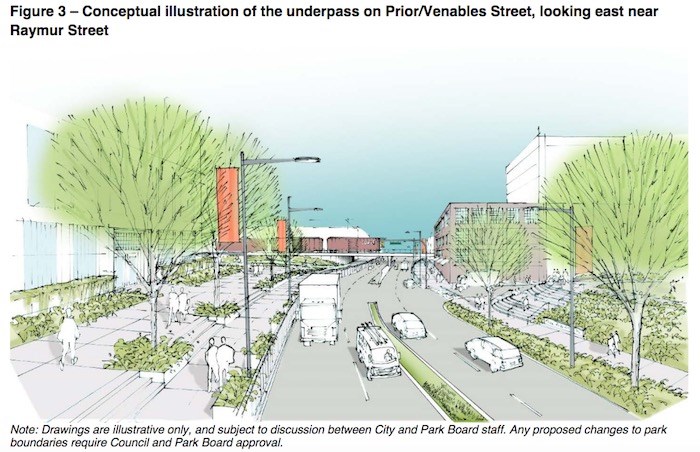 That anticipation is based on investments being made to expand the Port and double-track the rail line, said the report, also pointing out the proposed new St. Paul’s Hospital near the city’s passenger train station will require easy access for patients, medical staff and emergency personnel.

Staff’s recommendation to keep the Prior-Venables route goes against the Flats Arterial Community Panel’s preferred choice: an arterial route that connects Charles Street via an overpass over existing tracks near Clark Drive to National Avenue, which runs behind the train station.

“Potential project partners have not expressed support for the National-Charles Overpass, rather they support the most cost-effective grade-separation solution.”

The report noted the National-Charles option would cost more than $280 million and likely be borne by the City of Vancouver. The cost of the Prior-Venables train-bridge-underpass option would be expected to be shared largely by the Port of Vancouver and CN.

“An underpass on Prior-Venables street is preferred over an overpass for many reasons, including that it is more comfortable and accessible for people walking and cycling, would allow for better access to the industrial area, could be integrated with a people-friendly urban design, including the Adanac bikeway, and could provide connections to Strathcona Park,” said the report, noting the design of an underpass would not encourage motorists “to pick up speed as they drive down into the neighbourhood.”

Residents who spoke to council suggested installing curb bulges along Prior-Venables, reducing the speed limit to 30 km/h along the stretch adjacent to Strathcona Park and allowing 24/7 parking on both sides of the street to create a buffer to pedestrians.

Suggestions were also made to divert truck traffic to another route.

The staff report leaves room for council to consider what are essentially amendments to approving the train-bridge-underpass option that include traffic-calming measures, which are in line with suggestions from residents.

Resident David Vogt, who lives on Union Street, recommended council approve the amendments first — before a train-bridge-underpass is considered — to see if any of the suggested measures lead to a reduce in speeds and vehicles.

“Right now, the experiment is designed to fail,” he said. “Let’s make it work by designing it for success. No shovel in the ground until we’ve actually proven that we can calm Prior.”

But Jerry Dobrovolny, the city’s chief engineer, warned council that the project team behind the development of the new St. Paul’s Hospital needed council to decide this week on its preferred arterial route.

“The deadline is now,” he said, noting the team has to incorporate the approved arterial route into their design of the new hospital to avoid delays in planning and further costs.

Dobrovolny said there was “no perfect solution,” but believed the traffic-calming suggestions and a pilot project to reduce speeds and traffic volumes was a “step forward, and I think that’s better than doing nothing.”

“We’ve been stuck for a long time on this corridor, and I know that the residents have been asking for a long time to see downgrading and slower speeds and improved crossings — and that’s why we put those in as considerations,” he said.