Mailman chronicles adventures with Canuck the crow on Instagram

Photo Tyler Mcleod An East Van mailman is filming his encounters with Vancouver's famous crow, which means mail gets delivered on time and everyone gets to watch a beautiful relationship unfold through short, witty Instagram videos.
Apr 5, 2018 9:33 AM By: Melissa Shaw 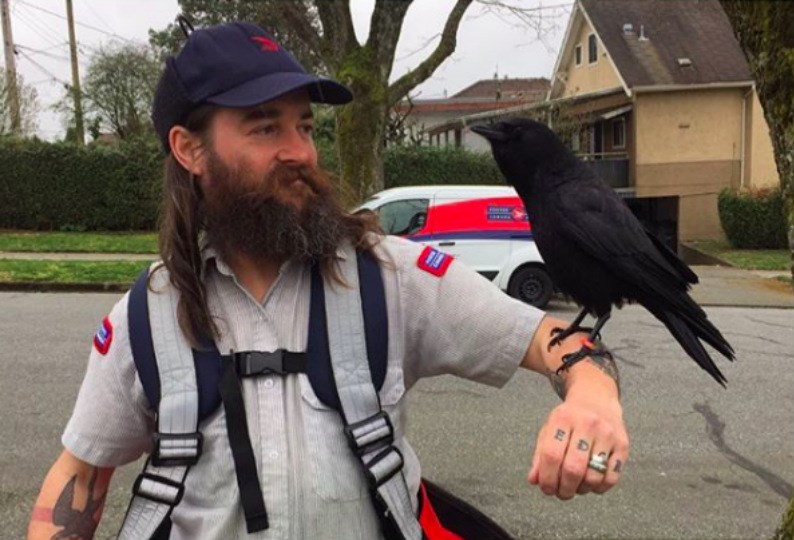 An East Van mailman is filming his encounters with Vancouver's famous crow, which means mail gets delivered on time and everyone gets to watch a beautiful relationship unfold through short, witty Instagram videos.

When Tyler Mcleod first started delivering mail in East Van about two years ago he'd never heard of Canuck. After a few encounters with the crow he met Canuck's friend Shawn Bergman, who introduced him to the bird.

Tyler Mcleod ran into some trouble last year when the crow, thinking it was defending its nest, began aggressively pecking him everyday as he delivered the mail.

"I was like, 'you know what? I'm just going to start bringing my GoPro because it's funny what's happening to me. One day he just flew up and landed on my arm and I was like, 'oh this is kind of not what I thought was going to happen here.' I guess he got to trusting me and now we're like buddies," he said.

Bird man is at it again!

Another bird lover at the post office advised Mcleod to give Canuck a peanut and that may have helped to improve relations between crow and mailman. "Now he sort of expects them I think," said Mcleod.

The little nut stasher at it again

"I don't go seeking him out. When I'm in the area I'll have my camera ready and if I see him, I'll just turn it on. Maybe I'll go for a visit but I make it real short. He's got a girlfriend crow too. Her name's Cassiar and she's sort of warmed up to me now," he said.

Canuck the crow has turned the local mailman into a fan. The man who used to view encounters with the bird as a bad part of his day said he now feels the opposite way and thinks, "hopefully I'll see him today."

He still gets pecked occasionally but says its more playful than aggressive now.

An interesting note: Canuck the crow is building a nest with Cassiar. Maybe we'll see some baby crows later this spring!