A punchless power-play was one of the main reasons the Vancouver Canucks struggled the last two seasons.
The Canadian Press Oct 16, 2017 3:58 PM 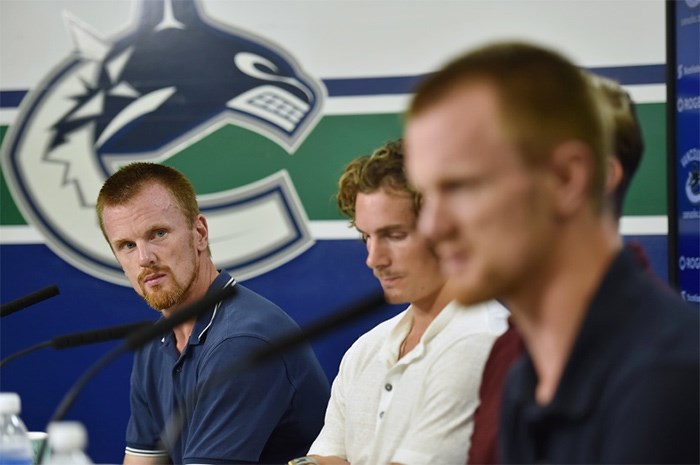 VANCOUVER - A punchless power-play was one of the main reasons the Vancouver Canucks struggled the last two seasons.

The Canucks were just 2-for-23 with the man advantage during a four-game homestand to open the NHL schedule, including an ugly 0-for-7 performance in Saturday's 5-2 loss to the Calgary Flames.

Vancouver was held to just one shot during five power plays in the first period, including none on a 5-on-3 stretch that lasted 1:11.

That dismal showing was compounded further when the Flames scored moments later while still down a man to go up 1-0, already the second short-handed goal the Canucks have surrendered this season.

Calgary, which gained significant momentum from its early penalty kills, finished the night with the same amount of short-handed shots (three) as Vancouver had on its seven man advantages.

"We are having a tough time," Canucks forward Daniel Sedin said of the power play after the game. "We have to stick with it.

"Once you get down on yourself and start doubting yourself, that's when you're in trouble."

One of the biggest problems was an inability to get pucks through, with the Canucks repeatedly firing shots and passes into the shin guards or sticks of Flames penalty killers.

Vancouver rookie head coach Travis Green said his team has to be smarter and quicker on the power play.

"We (also) have to have people around the net. You're not going to score on goalies in this league very often if they're seeing pucks, and you've got to get pucks through."

The Canucks had the league's ninth-ranked power play when they finished second in the Pacific Division in 2014-15, but wound up 27th the following year and dropped to 29th in 2016-17 as the team plummeted down the standings.

With a lack of imagination and the absence of a trigger man among the culprits for the anaemic attack, the Canucks made moves over the summer in hopes of fixing the problem.

Newell Brown, who ran Vancouver's power play when it ranked first in 2010-11 and fourth in 2011-12 during the club's consecutive Presidents' Trophy seasons, was brought back as an assistant coach.

But so far the power play has looked a lot like it did the last two seasons — stagnant and searching for answers.

"We have to move. The puck has to move," said the 37-year-old Sedin, who along with twin brother Henrik has looked like a shadow of his former self early on. "We have to move across the blue line. The forwards have to move. A lot of things need to happen.

"We're close. We have to be positive. We can't get down."

Rookie forward Brock Boeser, who might have the best shot on the team, found his way into the lineup and onto one of the power-play units after sitting out the first two games.

He wasn't, however, on the 5-on-3 group against Calgary, which turned out to be a curious decision at a crucial moment.

"We'll have to adjust it, take a look at it," Green conceded. "Obviously you're asking me if Brock should have been on the 5-on-3.

"That's something we're going to have to consider."

The rebuilding Canucks (1-2-1) beat the Edmonton Oilers 3-2 on opening night, but have scored just six combined goals since in losses to the Ottawa Senators, Winnipeg Jets, and Calgary.

While the power play has struggled, it's also clear the offensive woes run deeper.

"We've got to find a way to score," said Green. "I don't think we're sitting with a bunch of 40-goal scorers on our team, or guys that have proven that they're high-end goal scorers.

The Canucks' next test comes Tuesday when they open a five-game road trip in Ottawa, which will have captain Erik Karlsson back in the lineup, before travelling to Boston, Buffalo, Detroit and Minnesota.

"We should have had more points," Green said. "We could have won the first three games, but would've, should've, could've doesn't count for a lot."

Notes: Vancouver signed 2017 second-round pick Jonah Gadjovich to a three-year entry level contract on Monday. The six-foot-two, 209-pound forward has 69 goals and 47 assists in 194 games over three-plus seasons with the OHL's Owen Sound Attack. ... The Canucks recalled centre Michael Chaput from the Utica Comets of the American Hockey League. Chaput has two points and six penalty minutes if four games with the Comets this season.