It's an entire village built around helping those with dementia
The Canadian Press Mar 4, 2018 6:58 PM 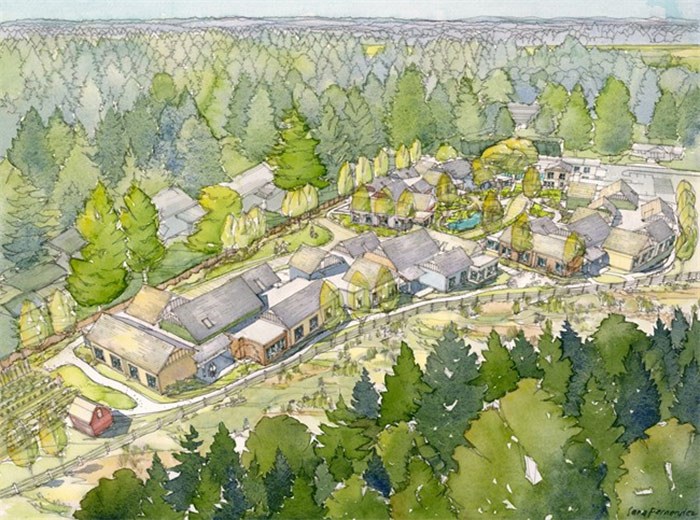 An artist’s rendition of a community in Langley, B.C. called The Village is shown in a handout. It’s designed to care for dementia patients while also giving them a sense of normalcy and freedom. THE CANADIAN PRESS/HO, Sara Fernandez, The Village

The construction of a specialized dementia care village in British Columbia that gives residents freedom to walk outside and participate in activities highlights the need for more diverse options for people living with the illness, advocates say.

The Village in Langley, B.C., is designed after models in the U.S. and the Netherlands. It will be the first of its kind in the province offering independent accommodations, amenities and programming in a secure environment to a small group of seniors with dementia, supported by an almost equal number of specially trained staff.

Unlike long-term care facilities or large assisted living complexes, the village will consist of six residences with only 12 units in each, housing a total of up to 78 people on the 2.8-hectare site in order to foster a tight-knit community.

Project lead Elroy Jespersen said he saw a need for a facility where people didn't feel "locked in" and could dictate what they did and how they go about their day.

That means going beyond providing for residents' basic needs like housing, food and physical health care, he said.

"We really have to focus on their emotional well being and really say what can we do to enhance that and keep them functioning as a valued member of our community in a purposeful way and contributing to their community," he said.

The Village won't have strict routines and schedules, allowing residents to wake up and have breakfast when they please, and make use of a network of walkways, landscaping and gardens all within a secure perimeter.

A community centre on the site will offer the main gateway in and out of the Village. The centre will include shops and spaces for programming that will be open to the public to make use of as well.

"We don't want to be an isolated segregated island, but a village within the larger community," Jespersen said.

Maria Howard, chief executive of the Alzheimer's Society of B.C., said there is a significant need for this type of housing since much of what's available isn't designed for the unique needs of people with dementia.

An estimated 564,000 Canadians were living with dementia in 2016, and the Alzheimer's Society predicts that with population growth and a pending wave of seniors, that number will rise to almost 940,000 people by 2031.

Howard said while most people opt to live at home for as long as they can, there is a shortage of programs and supports for people with dementia in communities.

Many people transition into long-term care when living at home becomes impossible, and while those facilities are adapting to the needs of people with dementia, they weren't initially designed for those whose losses are cognitive, she said.

B.C.'s senior's advocate Isobel Mackenzie said assisted living facilities bridge the gap for people who can no longer live on their own but aren't in need of around-the-clock medical care.

"I would like to see us move to a system where they can choose to move the subsidy where they want to go," she said.

The Village is being privately developed and operated. Jespersen said residents can expect to pay about $6,000 to $7,500 per month, which is typical for care without a subsidy.

As of yet, no public funds are being made available for prospective residents. Despite the price tag, Jespersen said he's been flooded with interest from people looking for themselves or family members to move in more than a year before it's scheduled to open.

Mackenzie said residents in the Lower Mainland cashing out of the red hot real estate market will have the funds to support more of these types of private facilities, which wasn't possible even a few years ago.

Longer term, she said this may help the system shift from prescribing care and instead "ask you how you want to be cared for, and our job is to figure out to how to connect you with the care you want and need."