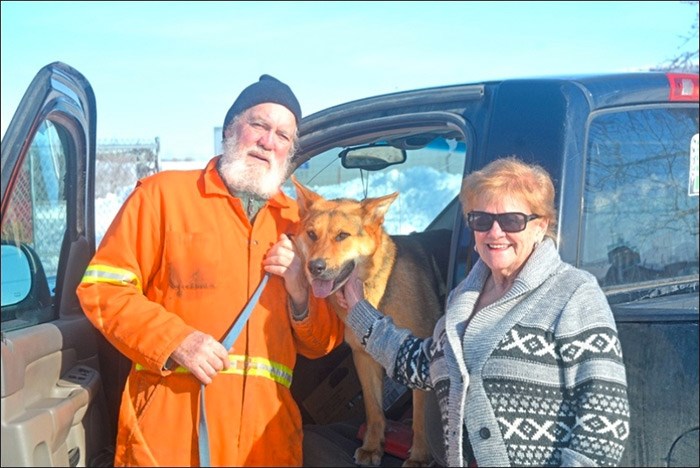 One of the first things Shirley McMillan did after she found her dog Chase locked in an empty house next door was take him to the vet; Photograph By JOSH GRESCHNER

Locked inside the bathroom of a neighbour’s empty house for 23 days, the dog watched as his owner went in and out of his home — sometimes on the way to post posters in search of the missing pet.

“He was trapped there all this time and watching us,” says Shirley McMillan after she unexpectedly discovered that her lost dog had spent more than three weeks only metres away from her home in Cochin, Saskatchewan.

It’s not as if there were many houses in Cochin for Chase to get trapped in. The 2016 census pegs Cochin's population at 148. Granted, the lakeside resort village in west-central Saskatchewan has more houses — 442 — than permanent residents.

The dog went missing on Feb. 11. McMillan scoured the area in search of him, calling the police and radio stations, putting up posters and offering a reward for his return. She even left his bed and some food out for him in case he returned when she wasn’t home.

On Mar. 6, her neighbour’s family members shovelled a path through the snow to check on the empty house, which is for sale. When they realized there was a large animal trapped in the bathroom, they called McMillan for help. Fearful of what she would encounter, she arrived at the house armed with a golf club.

“I was afraid to go in. I pushed the door as far as I could and out came my dog,” McMillan told the Battlefords News-Optimist. “It was unbelievable.”

McMillan thinks that, back in February, family members left the house, not realizing that Chase had snuck into the bathroom, unable to get himself out. The bathroom window looks out onto her house. She says Chase survived by drinking the water in the toilet.

The first thing McMillan did after being reunited with Chase was take him to the vet. Chase had lost nine pounds but was otherwise in good health.