Black and white and read all over

Boxy, the Westender mascot, at Vanier Park. Photograph By Dan Tougloet How does one say goodbye to the paper that established their career and served as a family and second home? I guess by acknowledging that it was never really mine to begin with.
V.I.A.
Dec 21, 2017 5:23 PM 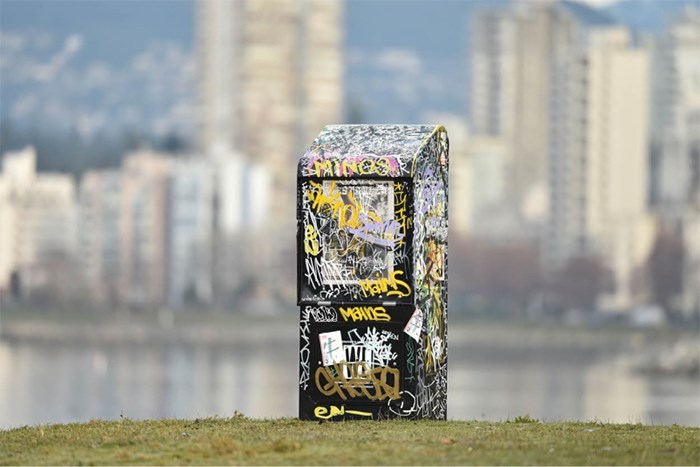 How does one say goodbye to the paper that established their career and served as a family and second home? I guess by acknowledging that it was never really mine to begin with.

The Westender belongs to the city, and, more specifically, the West End. Even in silence, it will also always belong to the countless readers, staff and former editors that I’ve heard from this past week.

It’s so easy, when the press is rolling, to just keep on after the next story; but I’m entirely thankful, now that we’ve reached the final page, to have had an opportunity to look back and learn more about us.

Like any good origin story the details are murky, but the Westender was born in the late ’40s and ran as the voice of downtown until the ’70s. According to former editor Kevin McKeown, the owners at that time were Tom and Sarah Kelly, a UBC professor and coffee shop owner, respectively, and the office was located in what is now a sushi bar on Denman.

By 1979 the paper was dormant, but Buy & Sell owners Mike and Meagan Abbott were soon talked into reviving the name, creating the paper you hold today.

In that initial decade, the paper held tight to the West End while giving its eclectic team of former war-time reporters, teenage illustrators, TV personalities and ace journalists the freedom to pursue politicians, sleazy landlords and any local story with a pulse.

Westender covers through the early years. From left: In 1979, the paper paid tribute to Fire Captain John Graham, who died in a West End apartment tower fire; the week before the 1980 civic election, Vic Bonderoff’s illustration shows it was down to Jack Volrich and Mike Harcourt for mayor; one week later, Harcourt was the last man standing; as one of the first news teams on the scene, the paper produced award-winning coverage of Vancouver’s 1994 Stanley Cup Riot.

By the ’90s, owners had changed and editor Ted Townsend began a notable shift to more arts and entertainment coverage. By the 2000s, editor Carlyn Yandle and co. were continuing that work while taking on the entire city under a new name, WE Vancouver, which reverted back to Westender in 2014, under editor Rob Mangelsdorf’s and my watch.

The message from everyone this week as been clear, though: no matter who owned us, what we were covering or what we’ve been called, the paper has always reached higher and deeper than its small, scrappy size would belie.

In fact, McKeown told me the Westender was once referred to by a writer for a rival outlet as “a community newspaper of dubious gender.”

Whatever you interpret that to mean, we still take it as a compliment.