A new retirement housing concept designed for seniors suffering from Alzheimer’s and dementia is becoming a B.C. reality with a private developer.
Frank O'Brien May 28, 2019 12:58 PM 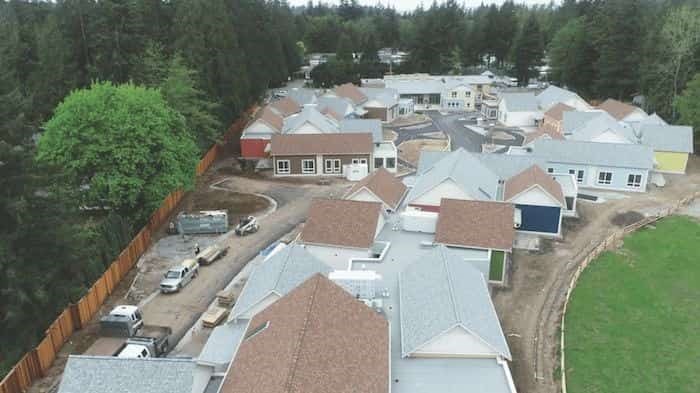 The Village, Canada’s first “dementia village” designed for seniors with mental disorders, is scheduled to open in June in Langley | Verve Senior Living

A new retirement housing concept designed for seniors suffering from Alzheimer’s and dementia is becoming a B.C. reality with a private developer opening the Village in Langley within weeks and the Ministry of Healthlaunching two pilot projects, including one in Vancouver.

The concept, first introduced in Europe has “turned the [senior’s] nursing home concept upside down,” according to one expert, by replacing institutional facilities with cottages centred around a secured-perimeter retail village and community amenities where residents are free to safely roam at will.

De Hogeweyk, a short train ride from Amsterdam, Netherlands, is the world’s first “dementia village.” It’s a small-house concept of six people living in a household with walkable access to a complete village within a walled compound. The village’s most innovative feature is a general store where seniors, accompanied by a caregiver, shop each day for groceries and household supplies.

The Village, a seven-acre complex at 3920 198 Street in Langley, has been developed based on the De Hogeweyk template. Construction began last year and the Village will open by mid-June, according to Elroy Jespersen, senior vice-president of special projects with Verve Senior Living, headquartered in Mississauga, Ontario, with a B.C. regional office in Richmond.

“We are the only one like this in Canada,” Jespersen said.

The Village is composed of six cottages that will be home to a dozen residents, with two sharing each cottage and a communal kitchen. The single-floor, two-bedroom, 1,700-square-foot cottages are clustered around a retail village that includes a grocery store, barbershop, beauty salon, coffee shop and even a neighbourhood pub, where residents can enjoy beer or wine with food. There is a community centre with an arts studio and a community garden. The site also includes a barn that could be home to farm animals, but Jespersen said that will be up to the residents to decide.

The site is discreetly fenced, and the walking paths and egress to all buildings are designed with safety in mind. A 72-person staff provides round-the-clock care and monitoring that includes help with shopping, meal preparation and 24-7 nursing care, if required.

The Village has registered 50 applicants, and so far about two-thirds of the 12 rental spaces have been leased to residents aged between 58 and 95.

Monthly rental costs range from $6,950 for assisted living to $7,800 for those who require full-time nursing assistance, Jespersen said.

“This is a much more dignified way to live for someone elderly who needs support,” Jespersen said, when compared with traditional senior-care institutions.

In Vancouver, Providence Health Care, using a $3.3 million private donation, has opened a pilot project for a dementia-

The goal is to transfer the model to stand-alone dementia villages, according to Jo-Ann Tait, Providence corporate director of seniors care and palliative services,

The Ministry of Health, along with Providence and Island Health, is developing a 17-acre dementia village called the Views in Comox that will include 126 publicly funded beds. It is being developed next toSt. Joseph’s Hospital in the Island community, but no date for its completion has been announced.

“People can live together, dine together, can be part of meal preparation and can come and go as much as they like within an outer perimeter that is secure,” said Tait, explaining the concept for the Views.

Levitt, who is also executive director of the Tabor Village retirement home in Abbotsford, said the dementia-village concept represents a sea change for the multibillion-dollar seniors housing sector, which has been largely modelled around institutional and programmed care.

“Centres of living, designed as small households where seniors live together and choose what they want to do and when they want to do it, has turned the nursing home upside down,” Levitt said.