B.C. First Nation taking some heat – from the air

The Heiltsuk used the heat pump installation project to train members in their installation and maintenance. | Submitted Like many remote First Nations communities in B.C., Bella Bella’s Heiltsuk has housing issues.
Nelson Bennett Jun 27, 2018 10:36 AM 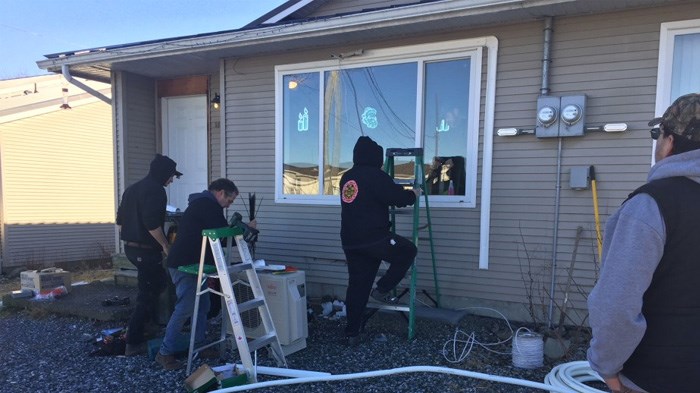 The Heiltsuk used the heat pump installation project to train members in their installation and maintenance. | Submitted

Without access to natural gas, the residents there have to rely on diesel heaters or wood stoves for warmth.

Burning diesel or wood generates a lot of greenhouse gases, and the transportation costs for heating oil force Bella Bella homeowners to spend two to three times the national average on heating their homes.

And the lack of circulation in reserve housing can cause mould and other serious air quality problems. But with the help of Ecotrust, the Heiltsuk have found a single technology solution to these multiple problems: air-source heat pumps.

Working with Ecotrust, which helps small and remote communities with economic development, the Heiltsuk recently completed a $200,000 pilot project in which old heating fuel systems were replaced with air-source heat pumps in 20 homes. Air quality is up and heating bills are down in homes fitted with ductless heat pumps, said Jamie Harris, a councillor for the Heiltsuk Tribal Council.

Based on the program’s success, the Heiltsuk now plan to install heat pumps in more than 300 homes, at a cost of about $3 million.

The pilot project’s funding came largely from the B.C. government’s rural dividend program. The Heiltsuk plan to fund the project’s next phase through the federal government’s Low Carbon Economy Fund.Graham Anderson, Ecotrust’s energy program manager, said the example could be repeated in other remote First Nations communities in B.C.

“Nearly all Indigenous communities in B.C. are challenged just with this fundamental issue of really poor-quality cookie-cutter housing that’s been built,” Anderson said.

Moreover, about two-thirds of the communities lack access to natural gas for home heating, so most rely on heating oil or wood stoves.

Heat pumps employ the same principle of heat exchange used in refrigerators and air conditioners. They can use the ground or water to extract heat, but the cheapest approach is air-sourced. Even when the temperature outside is -20 C, heat exchangers can extract warmth, although their efficiency drops the colder it gets.

The air-source heat pumps can also provide air conditioning in the summer – with a relatively small amount of electricity.

Bella Bella doesn’t have access to natural gas, but it has access to hydroelectric power from the Ocean Falls dam, which is an advantage, because heat pumps run on electricity. However, they require much less electricity than baseboard heaters.

The Heiltsuk are not the only B.C. First Nation community to switch from heating oil and wood stoves to heat pumps.

On Haida Gwaii, the Skidegate Band Council worked with BC Hydro and Indigenous and Northern Affairs Canada to install heat pumps in 350 homes and all of the band’s community buildings.

That project was completed about a year ago, and so far it has received “mixed reviews,” said Skidegate chief councillor Billy Yovanovich. Some people were surprised to see their power bills go up in the winter, Yovanovich said. But he attributes that to an unusually cold season.

He added that homeowners liked the heat pumps’ ability to act as air conditioners in the summer.

As part of the Bella Bella pilot project, the First Nation worked with Camosun College to train and certify Heiltsuk people to install and maintain heat pumps.

Harris said the heat-pump training was a key part of the project so that maintenance could be done on-reserve. “[And] we did not have to fly in any specialists to come into our community to fix whatever issues may arise.”