Here's why someone erected a giant mastodon sculpture on a B.C. island

And why the artist doesn't want you to know where it is hidden.

B.C.'s Bowen Island is home to a statuesque prehistoric beast that was created by a local artist.

An image of the stately sculpture was shared on Reddit by user FullTiltWard this week, who says they found the "hidden mastodon sculpture" on an art treasure hunt day.

At the time of this writing, the image has been up-voted nearly 300 times.

But what is a mastodon?

If you're familiar with mammals from the late Pleistocene period--or even if you're not--you've probably heard of woolly mammoths.

The woolly behemoths once roamed the earth's surface, and National Geographic reports that the extinct mammals are more closely related to today's Asian elephant, rather than the African.

But another extinct Elephantid, the mastodon, is slightly different from mammoths.

According to Livescience, the ancient titans roamed the earth at the same time, but "represent two distinct species of the Proboscidean family."

Mastodons came into existence earlier than mammoths and were shorter. They also didn't have the characteristic "hump" that mammoths did, which--not unlike camels of today--stored fat and nutrients to help them survive a harsh climate.

The Smithsonian adds that mastodons had also had "cone-shaped cusps on their molars designed to crush leaves, twigs and branches," which mammoths did not. 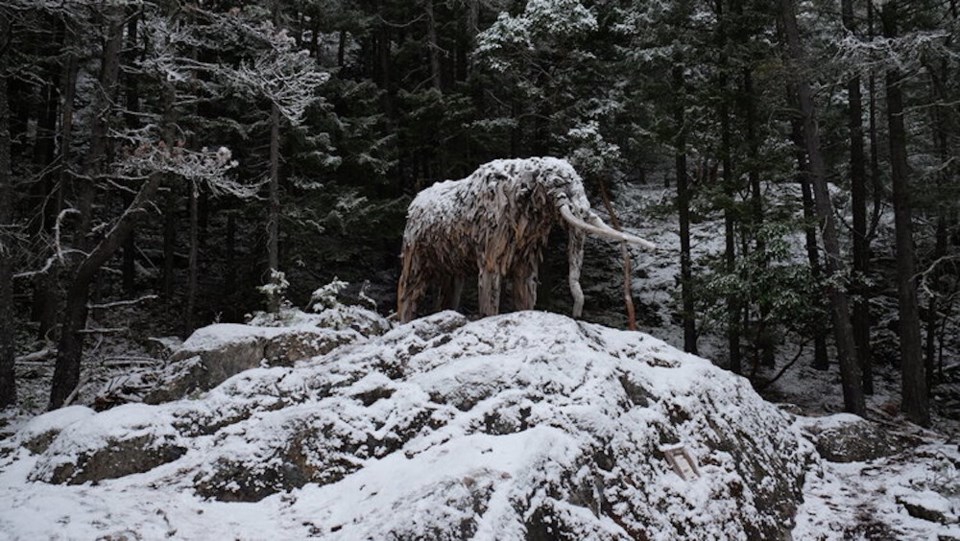 Trained as a biologist, Gloag holds a BSc in Biology from the University of Victoria and calls the west coast home.

On his website, he writes: "This sculpture is like nothing I’ve ever made before. It’s of an animal that has been extinct for approximately ten to twelve thousand years, likely because of human pressures."

Gloag notes that the titans were once widespread across North America, and hopes that people who see the sculpture will reflect on the animals living today that could be lost due to human impacts.

"The American mastodon, which is what I’ve created, is the first species that scientists recognized as having gone extinct. In this way, they are fundamental to our understanding of extinction," he explains.

According to Gloag, the sculpture is over eight-and-a-half feet at the shoulder and likely weighs over two thousand pounds.

But where exactly is this majestic beast situated on Bowen Island?

"I’ve kept its location secret for several reasons. Partly, I like the magic of people knowing it exists but not knowing where. I love the idea of someone stumbling upon it in the woods," writes Gloag.

"But I’m also scared that history will repeat itself, and the mastodon will be damaged."

Gloag's art has been featured at Madrona Gallery in Victoria, Mountain Galleries at the Fairmont in Whistler, and at the Wolf in the Fog restaurant in Tofino.