Another year, another record-breaking homeless count in Vancouver. 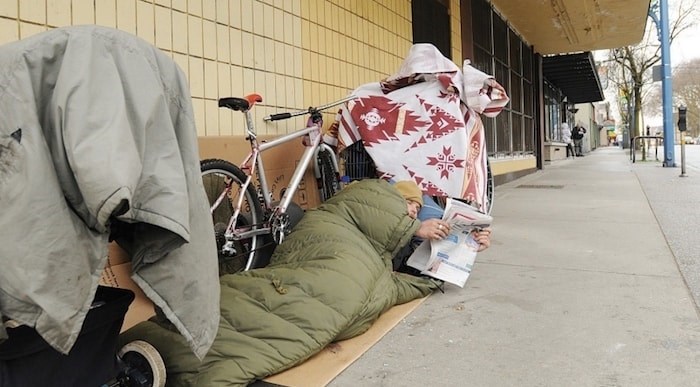 “It’s horrendous,” said COPE Coun. Jean Swanson, who was clearly moved when she spoke to reporters after hearing the results of the count at a city council meeting.

The 2,223 counted in March is an overall increase of 42 people from last year’s count, which recorded 2,181 people as homeless in Vancouver.

That was an all-time high.

Counts conducted over the last five years have shown a steady increase in the number of homeless in the city, jumping from 1,746 recorded in 2015 to this year’s 2,223. 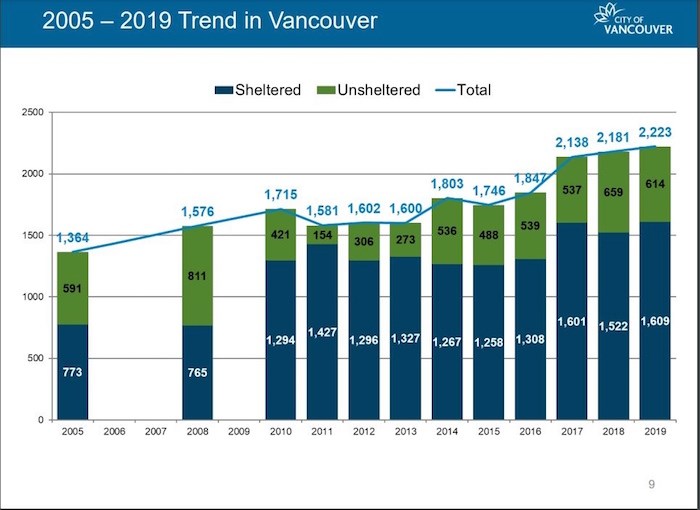 The increase in homelessness came despite the opening of 528 units of temporary modular housing across the city since last year’s homeless count in March.

The total number of modular housing units built under a program funded by the provincial government is now at 606. City staff said 503 of the tenants who moved in were previously homeless.

The hope from city staff and politicians in 2018 and prior to the count this year was the addition of modular housing would translate to fewer people counted as homeless.

Mayor Kennedy Stewart told the Courier in March that “all our hopes are really pinned on the temporary modular housing. I’m hoping that makes a difference.”

Asked Wednesday to explain the increase in homelessness — despite the addition of modular housing — Stewart pointed to findings of the count that revealed 331 people had been homeless for six months or less when surveyed by volunteers in March.

Another 208 said they had been homeless for six months to a year, and 490 said they were homeless between one and five years, which accounted for the biggest number of homeless. 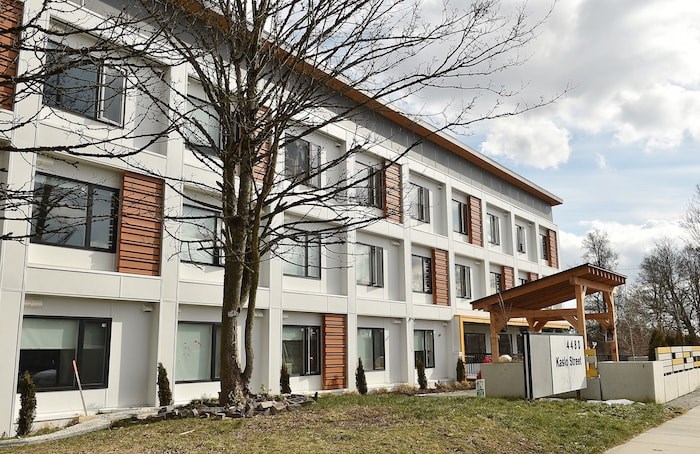 B.C. Housing Minister Selina Robinson told the Courier in an emailed statement that “years of inaction by the previous government have left many people in Vancouver and throughout B.C. experiencing or on the brink of homelessness.”

Robinson said the 606 modular housing units have had an impact on the lives of people who were previously homeless, despite the increase in homelessness in the city.

“This year’s count shows a seven per cent decrease in street homelessness in the city — an indication that our strong actions and partnerships with local governments are starting to make a difference,” Robinson said. “We know there is more work to do.”

The minister said her government continues to talk to the City of Vancouver about the potential for additional supportive housing — “and we have brought the federal government into these discussions.”

Stewart was direct in his response to reporters who asked how the city will eventually turn the tide on homelessness, calling out Prime Minister Justin Trudeau and his government.

“It all depends on the prime minister,” he said, when asked whether he was hopeful next year’s homeless count would show a decrease in the number of people without a home.

“If the prime minister comes through with his investments, I think we could probably see a dent, especially if there’s some [money] in modular housing.”

Added Stewart: “Really it comes down to: Is the prime minister going to put his money where his mouth is? That’s it, for me. I think the province is really doing a lot, and you see what we’re doing here — we’re doing a lot. Now it’s time for the third level [of government] to come in.”

Since he became mayor, he said, the federal government has committed a total of $300,000 towards two housing projects in Vancouver.

That limited funding has come despite Jean-Yves Duclos, the federal minister responsible for housing, announcing in Vancouver in 2017 a $40-billion, 10-year national housing strategy that aims to reduce chronic homelessness by 50 per cent in Canada.

A city staff presentation on the results of the homeless count showed how homelessness increased despite the city’s outreach team working with 4,749 people since 2013 to secure housing.

A breakdown of how many of those 4,749 people were previously homeless was not immediately available, but staff said the city’s outreach team works with people who are either without a home or at risk of homelessness.

The staff presentation also showed the city continues to approve and open new affordable homes. The mayor said to keep pace with the growing homelessness, an estimate of 1,000 units of housing per year geared at low-income people is needed.

The findings of this year’s count revealed much of what previous counts have shown — that the majority of homeless are men between 25 and 54, with many living with a medical condition or illness (44 per cent), mental health issue (44 per cent), a physical disability (38 per cent), or a combination. 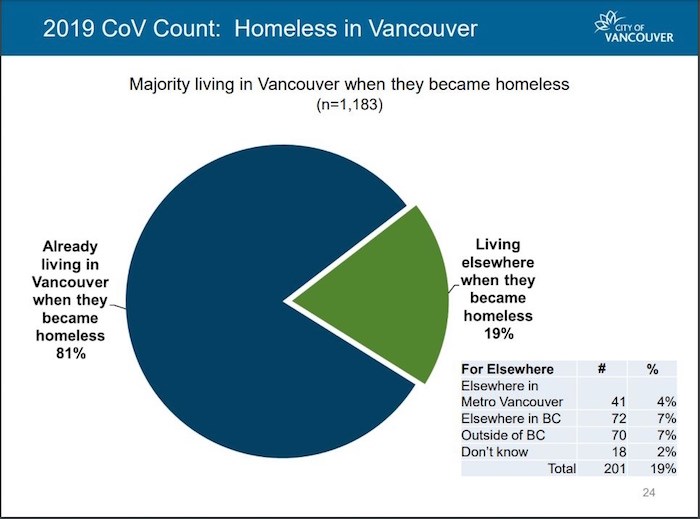 Findings of homeless counts shows where people last had a home before becoming homeless. Image courtesy City of Vancouver

The data also showed 404 people had multiple income sources but still couldn’t afford rent. A total of 42 per cent were on income assistance and 31 per cent on disability benefits.

That figure was based on surveying 1,255 Indigenous people who agreed to be interviewed by volunteers in this year’s count. A total of 46 per cent were considered unsheltered and 34 per cent sheltered.

Drivers of homelessness were consistent with previous findings of Vancouver counts:

A low vacancy rate, the loss of single-room-occupancy hotel units such as the closure of the Balmoral and Regent hotels, high rents at some of the hotels, overall rising rental rates, substance abuse issues, young people aging out of foster care, traumatic life events and chronic poverty.