A backyard sports court is slated to be ripped up after West Vancouver council voted unanimously to reject a homeowner’s appeal to save a structure built without a permit.
Nov 18, 2019 6:54 AM By: Jeremy Shepherd 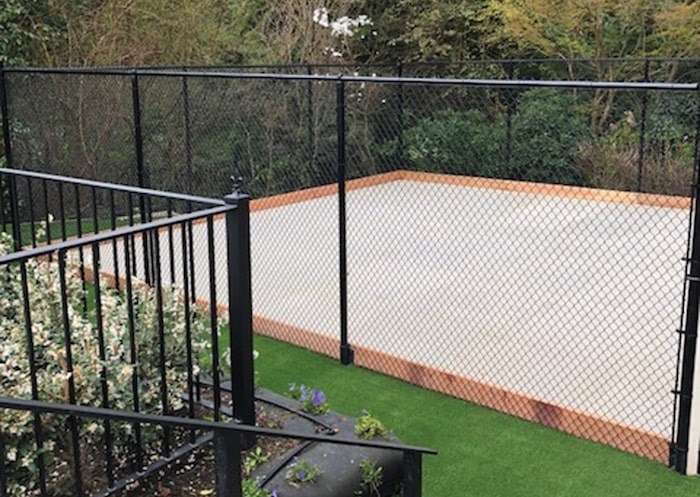 Sometimes it’s worse to beg forgiveness than to ask permission.

A backyard sports court is slated to be ripped up after West Vancouver council voted unanimously Nov. 4 to reject a homeowner’s appeal to save a structure built without a permit and within five metres of McDonald Creek.

Sinclair Street homeowner Adam Hill pleaded with council to preserve his multi-purpose court, which is about half the size of a tennis court.

The playcourt was a replacement for a playground and playhouse, Hill explained.

“When those were taken out in order to build the pool, we were really hoping that grass would serve our needs.”

But after failing to get grass to grow on the property, which is located slightly east of Hay Park between Inglewood and Fulton avenues, Hill said he needed a space for his children to play away from their busy street.

“We are deeply apologetic and remorseful for having unwittingly failed to follow the district’s procedures,” Hill wrote to council.

District staff told Hill in early 2018 that a sports court wasn’t allowed at the rear of the approximately 18,000-square-foot property. But in April 2019 staff were tipped by a neighbour that the court had been built. Staff also found the area requiring natural planting was green with artificial turf.

Stipulating that he wasn’t trying to buy his way out of the situation, Hill told council he was willing to pay $30,000 toward a streamkeeping project that would offset the habitat loss caused by the play court.

“A letter has gone out from 993 Sinclair St. . . . stating that Sartori Environmental conducted an assessment of our playcourt and concluded it was ‘safe and not harmful to the creek.’ Is that a correct statement?” he asked.

“That is an incorrect statement,” Alex Sartori clarified.

In voting to deny Hill’s appeal, Soprovich said the bylaws are in place for a reason.

“It should not be easier to ask for forgiveness, rather than permission,” he said.

While Coun. Marcus Wong said he could see arguments on both sides, he ultimately voted to uphold the bylaw.

Coun. Sharon Thompson reluctantly agreed. The court is almost viewed as a community amenity, Thompson said, lauding Hill for creating “an environment where kids can play safely and independently.”

Less conflicted was Coun. Nora Gambioli, who noted the “distressing” trend of homeowners building in a riparian area and then appealing to council to let their intrusive structure remain.

“It’s not appropriate to make compromises in a case like this,” she said.

Stretching approximately six kilometres between Hollyburn Ridge and the Burrard Inlet, McDonald Creek has been classified as endangered by the Pacific Streamkeepers Federation due to both water quality problems and loss of riparian vegetation.