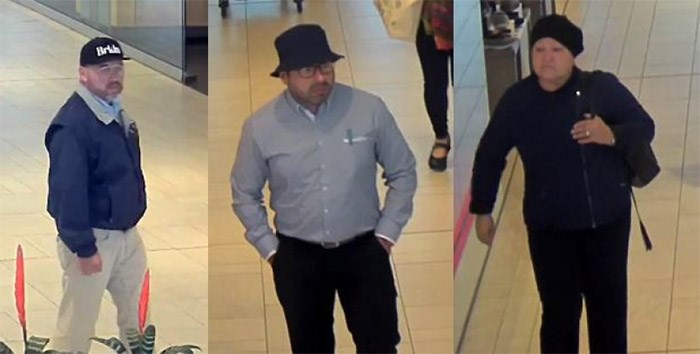 Richmond RCMP is looking for information on these three suspects

Richmond Mounties are warning the public to beware of fraudsters suspected of selling fake, winning lottery tickets in the city.

The RCMP has released photos of suspects believed to be involved in the scheme, which played out last month in the area of Richmond Centre shopping mall.

According to police, on Sept. 26, the victim was allegedly approached by a male suspect, who stated he needed help in claiming the winnings from a lottery ticket.

The suspect allegedly told the victim that he could not claim the winnings as he was an illegal immigrant.

The suspect then showed the victim a lottery ticket, which turned out to be fake, which depicted the winning lottery numbers for a previous draw and offered to sell the ticket to the victim.

A second male suspect then approached, pretending not to know the first suspect and offered to help.

The two suspects then allegedly convinced the victim to purchase the fake lottery ticket and assisted the victim in withdrawing the money from the bank to complete the sale.

“The Richmond RCMP appreciates any information the public can provide about these suspects,” said Cpl. Marco Sallinen, of Richmond RCMP Economic Crimes Unit.

“We feel the suspects may have committed similar frauds in the past. Please be cautious if anyone ever attempts to offer or sell you something of great value for a seemingly incredible deal.

“When possible, have the item independently examined or tested, and consider involving legal counsel to complete the transaction.”

If you have been the victim of a crime committed by these suspects, or can provide information to assist this investigation, contact Cpl. Marco Sallinen at Richmond RCMP on 604-278-1212. Should you wish to remain anonymous, contact Crimestoppers at 1-800-222-TIPS(8477).