The data comes from Research Co., who were commissioned by UBC to conduct the poll indicating local endorsement of the massive transit project.

Among the issues included in the poll administered online to 1,900 Metro Vancouver adults were those regarding the role UBC plays in the local economy and if the SkyTrain extension would encourage residents to visit the campus more, as well as how locals prioritize transit projects addressing congestion and the environment, as well as support for the selection of SkyTrain technology - as opposed to the now-dismissed option of light rail.

A report issued in January concluded that SkyTrain a SkyTrain link is the only option that makes sense, despite the dramatic increase in cost compared to LRT technology. 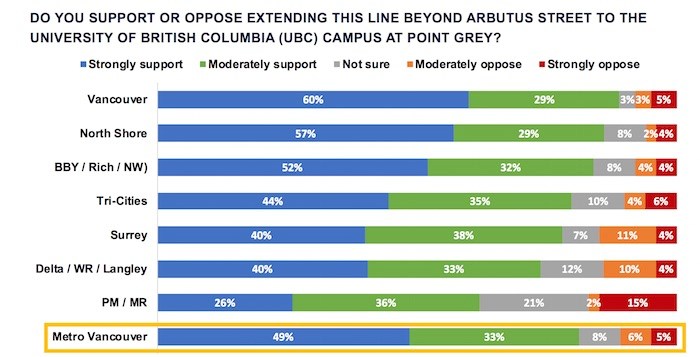 In the following days, Vancouver City Council voted 9-2 in favour of supporting a staff recommendation to plan to extend the Millennium Line to UBC.

Two councillors opposed the motion, at least in part because they said that the project is not a transit plan for the entire city, and that the funding for the project could restrict resources for other transit in the city.

However, in the Research Co. poll, conducted ahead of these headline-making moments back in Nov. 2018, two-thirds of Metro Vancouverites said they favour SkyTrain over LRT, and less than a quarter of those surveyed said they think there are other more important transit projects that should be completed before the UBC portion of the line. 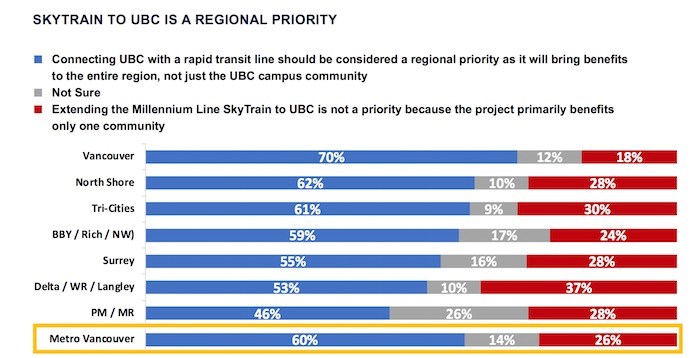 Here are the highlights provided by Research Co. from the survey:

With files from Business In Vancouver and The Canadian Press