Jamie Martz, volunteer with North Shore Streamkeepers, crouches at the edge of Hastings Creek, where construction debris has damaged a fish habitat.
May 18, 2018 9:21 AM By: Brent Richter 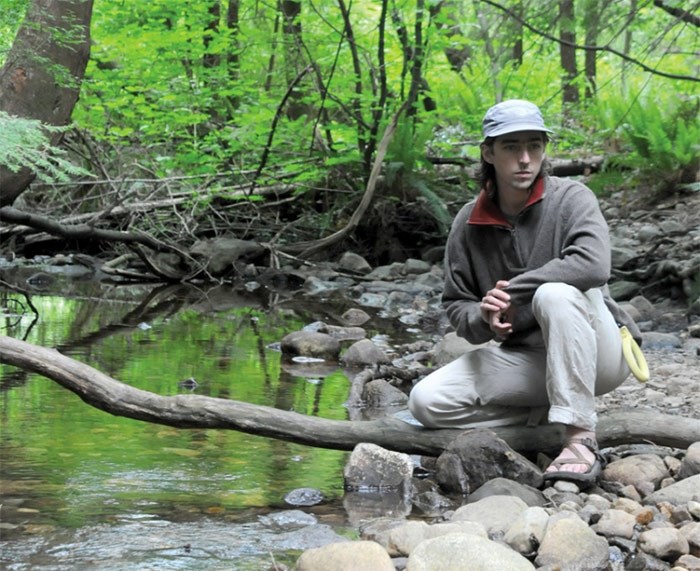 A District of North Vancouver homeowner has been fined after careless construction work on their property led to a sediment spill in Hastings Creek.

Area resident Graham Smith was out walking his dog in Princess Park on Friday when he noticed a cloudy, grey discharge in the creek, stemming from a storm drain running under Princess Avenue. Smith quickly brought it to the district’s attention on Twitter.

“We sent a member of our environment team out to investigate. They were able to locate the source of the contamination and they issued a fine for not having proper sediment or erosion control in place,” said Stephanie Smiley, district spokeswoman. “We suspect that sediment-laden water was being pumped into the storm sewer connection from the construction site.”

But Smiley said she could not say where the home was specifically or even what street it was on, or who the contractor was, due to privacy concerns.

“It’s up to every resident to make sure that they’re being responsible, that the contractor that they’re hiring is making reasonable decisions,” Smiley said.

Jamie Martz, a volunteer with North Shore Streamkeepers, visited the site and said about 10 metres of fish habitat along the north side of the creek bank is damaged.

“I saw newborn fry and one-year-old fish not even 10 metres away from where this spill happened so wherever has been smothered by this sediment essentially becomes kind of a dead area for this year and no fish or insects are going to use it,” he said. “Every little piece of habitat is really important.”

All told, it was lucky that the spill didn’t cause more damage, Martz said. Last week, the North Shore News reported that chemical spills led to three major fish kills on streams in West Vancouver and North Vancouver, including one that may have caused the extinction of cutthroat trout in Larson Creek. That incident, which was caused by a Ministry of Transportation and Infrastructure project, is still under investigation by Environment Canada’s enforcement branch.

Streamkeeper Barbara Frisken said her group tries to educate homeowners and contractors about the risk of construction debris getting into storm drains but the problem is endemic.

“It’s just an ongoing battle and there are so many construction projects, and people come from all over to work on them. And they’re coming from places that don’t necessarily have salmon in their streams,” she said. “It’s an education problem, I think. We have the bylaws.”

Some best practices they recommend include only allowing clean water to leave a construction site, keeping sediment and soil covered and away from the road, installing a sediment trap, and covering storm drains when applying asphalt concrete or sealant.

“People sometimes pour paint into the creek. Can you imagine?” Frisken said.

Both Frisken and Smiley said it’s important for people to report any potential stream pollution to the district as quickly as possible, just as Smith did.

“We rely on residents to let us know when they see something out of the ordinary,” Smiley said.

‘That was our goal’: VPD glad for extra attention on controversial distraction theft billboard
Jul 27, 2021 4:30 PM