You heard it here first: Pee and Poo - Metro Vancouver's beloved Unflushable's campaign mascots - are going on a summer tour.
May 1, 2019 4:50 PM By: Elana Shepert

You heard it here first: Pee and Poo - Metro Vancouver's beloved Unflushable's campaign mascots - are going on a summer tour.

They took the Lower Mainland by storm this week during the Unflushables campaign launch at Waterfront SkyTrain Station on Monday, April 29. Now, the dynamic toilet duo are set to spread their flush-worthy knowledge throughout the region as they embark on a multi-stop tour. 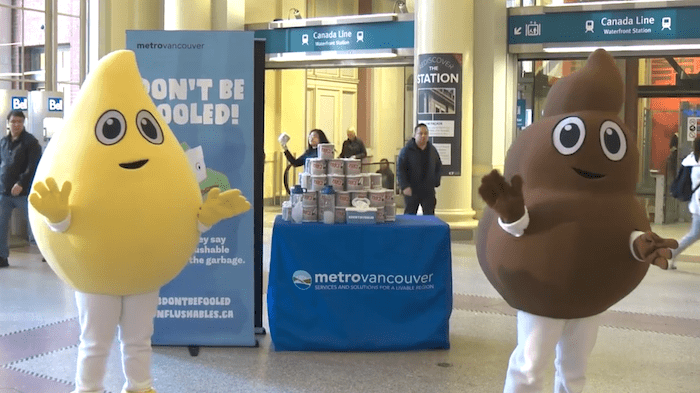 Vancouver Is Awesome spoke to Larina Lopez, Division Manager, Corporate Communications, Metro Vancouver, who explained why they chose the mascots for the Unflushables campaign.

"This is a really important issue. It's our third year running the campaign and we really needed a way to get the message out about what can't be flushed," she said. "Not only is this a huge environmental problem, but it also costs the region hundreds of thousands of dollars."

Lopez reports that a staggering $250 million is spent across the country dealing with damage to the sewer system. As a result, campaign leaders hope that the playful pair will spark a conversation about the proper disposal of unflushables.

Lopez added that face-to-face campaigns have a much further reach, which is why the mascots will visit municipalities across Metro Vancouver over the spring and summer.

"The mascots cost roughly $8,000, but the damage to our local sewers is in the hundreds of thousands. So, when you're trying to get a message out to people, and this certainly has, we consider that a success."

Initial findings from tests at Ryerson University found that only 11 of 101 products met the ‘flushable’ specifications developed by the International Water Services Flushability Group (IWSFG) – and all of those were normal toilet paper.

While Pee and Poo are expected to make eight stops on their tour, only three venues have been confirmed so far. In addition, they may make additional appearances through the summer outside of the tour.

One of the brightest meteor showers of the year is set to dazzle Vancouver skies
Aug 3, 2021 3:41 PM