The mayor of the city hit hardest by the opioid epidemic in the U.S. was in Vancouver last week to learn how injection sites have saved lives of drug users.

The mayor of the city hit hardest by the opioid epidemic in the United States was in Vancouver last week to learn from police and harm reduction workers how injection sites have saved lives of drug users. 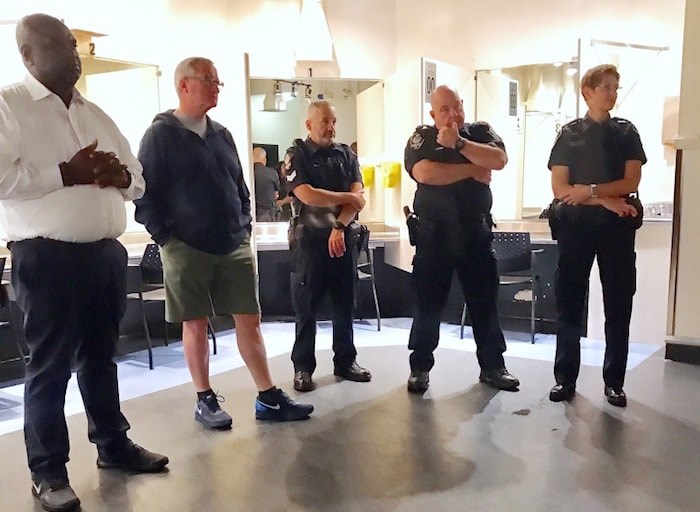 Jim Kenney of Philadelphia — a city of 1.6 million people that recorded 1,116 drug deaths last year — said he wanted to see first-hand what Vancouver’s experience is with injection sites and how the service intersects with community and law enforcement.

“My conclusion was the overdose prevention sites actually do save lives, but there are operational and public order concerns that I still have,” said Kenney, who spoke to the Courier Tuesday by telephone from his office.

The mayor was in Vancouver July 30 and 31 before visiting injection sites in Toronto later in the week. Philadelphia Police Commissioner Richard Ross Jr. and other city officials were part of the delegation.

Kenney met with Vancouver police, toured the Insite drug injection site on East Hastings and other harm reduction facilities in the Downtown Eastside, including the Molson overdose prevention site across the street from Insite.

Philadelphia does not have an injection site, but a non-profit organization in that city called Safehouse has led the charge to open a facility. The mayor pointed out a district attorney’s office in the eastern district of the city launched a lawsuit to stop the opening of a site.

“If the judge tells us we can’t do it, the game’s over,” Kenney said.

“We do believe though — at least from our conversations in the courtroom — that the judge understands the gravity of the health crisis we’re facing. We’ll see what happens. That will be the first big hurdle. Then the other hurdle will be where it goes and what we have to put in place to ensure public order.”

Like British Columbia, which has a population of five million and saw 1,535 people die of an overdose last year, the majority of drug deaths in Philadelphia have been linked to fentanyl, the deadly synthetic opioid.

Why is fentanyl so prevalent in Philadelphia?

“I have no idea,” Kenney said. “If I knew, I would tell the U.S. attorney’s office to go get [whoever brought it to Philadelphia] and have the FBI arrest them.”

The Courier spoke in more detail to Kenney about his visit to Canada, his city’s public health crisis and how — in his view — senior levels of government in the United States are not addressing Philadelphia’s opioid epidemic.

The following is a condensed and edited version of the rest of the interview.

Vancouver Courier: What led to the call for injection sites in Philadelphia?

Mayor Jim Kenney: I didn’t call for them. There was a group of people who wanted to explore the possibility of doing one as a non-profit. And because of the level of death that we were having — from 900 to 1,100 to 1,200 — I thought that we should be looking at every possible way to save lives because you can’t get better and you can’t fight addiction when you’re dead.

To be clear, you support injection sites?

I support the concept of it. I do believe it saves lives. We just have to figure out the operational plan and what the police are supposed to do and not supposed to do, what it attracts and doesn’t attract to the site, what goes on around the site. I think Canada is different. The provincial and federal governments are actors in this because in addition to funding the sites, they fund housing, they fund addiction services, they fund health care, they fund education. And we don’t have governments in Pennsylvania -- or in Washington — that care too much about any of those things. And unless you have the housing and the addiction services and the health care, it’s hard for people to actually recover.

From what you saw during your visit to Vancouver, what would an injection site do for drug users in Philadelphia?

I’m convinced that if we had it here, we would have no overdose deaths in that facility. The problem that we have is that a lot of our uptick in overdose deaths is happening inside people’s homes. We have a new area in south Philly that’s experiencing an uptick in overdose deaths and most, if not all of them, have happened in their own home. That’s a difficulty [for the city] getting in there, getting in to people’s houses -- families in denial, people in denial and then they wind up dead and it’s too late.

You’ve raised concerns about public order. What was your reaction to seeing the street disorder in the Downtown Eastside?

The street level disorder is substantial, although it’s not violent. But it’s clearly visible. If you’re in big city to begin with, you see disorder already — we see that with our homeless population, our addicted population, which is both homeless and mentally ill. The [East Hastings] street didn’t shock me. I did recognize that there seemed to be less disorder in Toronto because maybe it wasn’t as concentrated [to one area] as these sites are in a five-block area [in Vancouver]. They took us to at least five or six different sites and I didn’t see the same dynamic in Toronto as I saw in Vancouver.

You mentioned guns when talking about public order.

The other issue that comes into play with us, which doesn’t affect you guys, is for the most part you guys don’t have guns. And that’s a big issue here. Obviously, over the weekend, we’ve seen some terrible stuff [mass shootings in Ohio and Texas] and just in general there are more guns in this country than any other country in the world.

It does make sense, but I don’t see the government funding the purchase and supply of [medical grade] heroin. I do think though there’s a possibility of the use of other types of opioids they’ve been experimenting with in the safe injection site — drugs like Dilaudid [hydromorphone]. That may be more doable than actually buying heroin.

From what I’ve read, Commissioner Ross has had reservations about the opening of injection sites in Philadelphia. I reached out to his office in an attempt to speak to him about whether his trip to Vancouver answered some questions for him about injection sites. His office declined the request, saying your comments to me would be the “official representative statement for the entire city.”

I can’t speak for him. But in general, he’s a police officer. He’s been a police officer his entire career. So they look at things differently and have a different way — a different approach — that’s kind of antithetical to some degree for lifetime law enforcement to get their arms around this. I’m glad he has that view because more skepticism makes us a little tighter if we want to move forward.

I’m curious what he told you after his visit to Vancouver and Toronto.

I didn’t sit with him on the plane. But I mean he just takes it in. He’s a very thoughtful and intelligent person. I’m sure he has his own personal opinion and I’m sure he has a practical police opinion about how to do this. But he’s not been stridently against it, and he’s not been out marching in front of the parade for it.

I pay some attention to U.S. politics but I don’t hear many of the Democratic candidates for president talking about injection sites or the opioid crisis. Have I just missed that, or is this not an issue for politicians from senior levels of government?

It should be, and that’s what I admire about the Canadian government and the provincial governments: they recognize the problem and they’re willing to put resources in. When the debate of the day [in the U.S.] is whether we build a wall across Mexico or not, and continually funding the military to crazy levels where they don’t even need the stuff that they’re buying them — and not wanting to talk about health care, and not wanting to talk about education and addiction —that’s a failing of our federal and state government that we don’t have these conversations, and we don’t use the resources that the governments have to fund things that people really need.

Injection sites are still a hard sell for many people in Canada, although there are more across the country than ever before. What do you say to that after having visited sites in Vancouver and Toronto?

What was really surprising to me was that the original site that opened in Toronto, which was opened without authorization, is down the street from a rec centre that has a hockey rink, where it’s very active and people were playing pickup hockey in the morning. Across the street from the rec centre is a 100-year-old homeless shelter. And around the corner from the injection site is a row of houses that just all sold for a million and a half [dollars]. So it doesn’t seem to be a detractor to property values in that neighbourhood, or to the fact that people want to spend $1.5 million to live around the corner from an injection site.

So to sum up—the takeaways from your visit to Vancouver...

It’s a beautiful city, very nice people, very competent people running it, really good police force, really dedicated people who are dedicated to helping people save their lives and get better—and a provincial government and federal government that cares really about people’s well-being and is willing to fund things that make people better, more educated, more employable and less addicted.